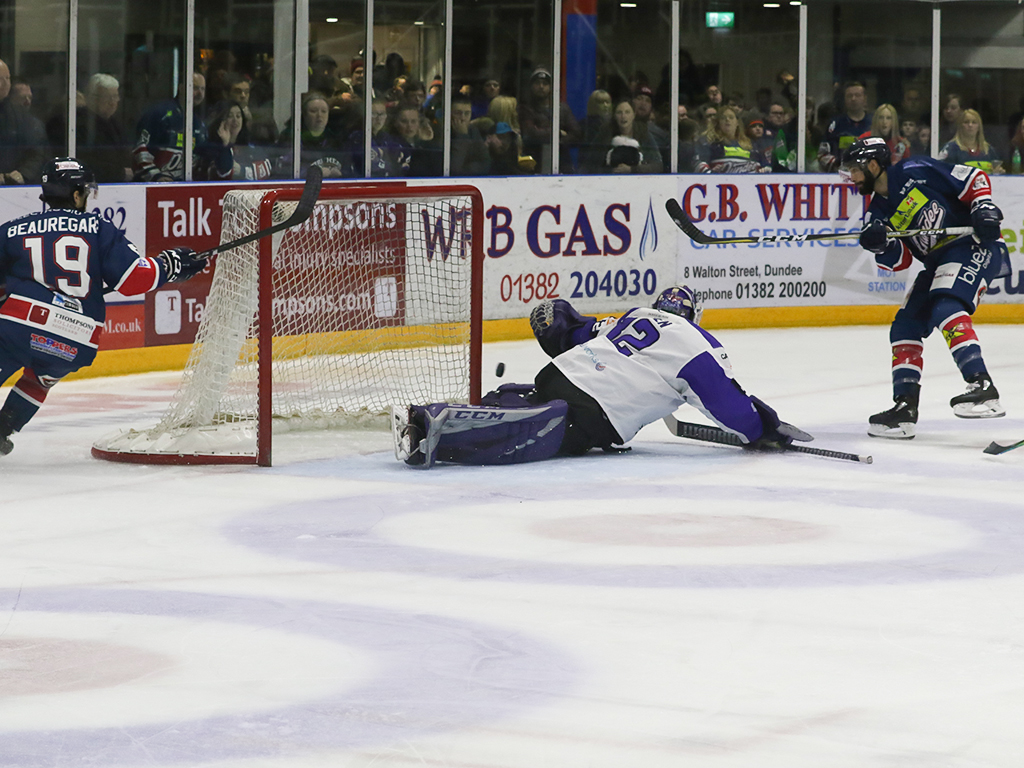 The Kitmart Dundee Stars finally ended their losing run and claimed a much-needed win and two points for their league campaign.

Defenseman, Kris Inglis was the only Stars player to be missing as he recovers from an upper body injury sustained last weekend.

Despite being a man down, Dundee had nearly all of the opening chances and when Elgin Pearce got close to the Glasgow goal, Matt Stanisz quickly forced him to the deck.

However, that immediately put the Clan shorthanded as Stanisz was given a penalty for tipping after just 34 seconds.

The visitors survived their two-minute stint with four skaters and then created their first key scoring opportunity as Jordan Heywood’s pass was directed upwards by Rasmus Bjerrum but it bounced off the crossbar and was cleared away by the Stars defence.

The first goal would come just moments later and it came straight from a face-off in the ninth minute.

Just Maylan won possession for Dundee and the puck came to Jagger Dirk who fired a shot into the traffic in front of Patrick Killeen’s net and Colton Kroeker got a late touch to redirect the puck past the Glasgow goalie.

The early goal gave the home team the momentum they needed and 35 seconds later, they made it 2-0.

Brett Stovin took possession on the edge of the Glasgow end and sent a low shot in that was stopped by the leg pads of Killeen but the rebound landed perfectly for Jordan Cownie, who was drifting in at the right post and he swept up the rebound.

The Stars were in full control of the game as Glasgow struggled to find a way into it and they were only just managing to cope with the waves of attacks from Dundee.

Elgin Pearce did well to create a very dangerous scoring chance for Dundee as he got tangled up with Clan’s Mathieu Roy but the Canadian managed to keep the puck onside before knocking it forward to Anthony Beauregard.

Beauregard then quickly passed to Matt Marquardt who was in acres of space and he pulled the puck left before shooting towards the top corner, but Killeen made a great save with his blocker in the 17th minute.

The physical aspect of the match began to grow and after a strong defensive play by Shawn Boutin, he was roughed up behind the play by Stanisz, which put the visitors back on the penalty kill.

The first period ended with Dundee still on the powerplay and holding a 2-0 lead.

The second session began with the Clan returning to full strength as they seen out the rest of Stanisz’s penalty but the defenseman would return to box seven minutes later for a cross-checking foul, again behind the play.

The home team could have extended their lead on the powerplay but a fast reacting Glasgow defence quickly cleared the danger.

There was more penalties to come as Nolan LaPorte made forceful contact with the Dundee netminder, Alex Leclerc as he reached up to snatch a puck out of mid-air and that prompted Reilly O’Connor to come to the aid of his goalie.

Both players received two-minute minors and with both teams down to four skaters, Beauregard and Pearce showed what they can do when given extra space.

The Stars forced a turnover in the middle of the ice, allowing the duo to break into the Glasgow end with just Killeen in their way.

Beauregard held onto the puck and skated towards the Glasgow goal but at the very last second sent a pass across to Pearce, who fired back across the goal and into the twine to make it 3-0 after 30 minutes.

The Stars would continue to look dangerous for the rest of the period but an unfortunate turnover in their own end allowed Zack Fitzgerald’s side to get back into the game.

With a scramble for the puck going on in the corner it sprung out and was laying in front of the Stars net where Jordan Heywood picked it up and picked out the right top corner, sending the puck past an off-set Leclerc in the 38th minute.

Omar Pacha’s men again took a two-goal lead into the break and the Stars boss wanted them to close the game down in the final period.

The third stanza seen a continuance of the Dundee dominance as an early chance for Beauregard forced Killeen into making a vital stop and when back on the powerplay, the Tayside team were even more dangerous but the Clan goalie continued to bail his team out.

Although, with Beauregard in the box for a high sticking foul, there was a shorthanded chance for the Stars as Kevin Dufour was played through on goal but Jordan Heywood caught up with the Dundee sniper and squandered his scoring opportunity.

Both sides lost a player each as Dirk and Glasgow’s Mikael Lidhammar were sent to the sin bin for roughing and that is when the Clan came into the game.

Fitzgerald used his timeout and subbed Killeen out for an extra attacker but Dundee would find themselves in a difficult situation as inside the final two minutes they lost Boutin to a boarding penalty after he hit Roy low into the boards.

With a two man advantage, Glasgow pulled a goal back on the powerplay as Chad Rau sent a pass from one post to the other and Pitt was waiting at the receiving end to smash it in, with just 64 seconds left to play.

However, as the visitors went all out for the equaliser, the Stars won possession and went down the other end of the ice to put the puck in the goal.

Although, the goal was not given, to the utter disbelief of the entire Dundee Ice Arena.

Pearce had taken the puck through the neutral zone and played a pass across to Kroeker, who was able to finish from just inside the blueline but the officials believed the Stars may have been offside and therefore disallowed the goal.

Furthermore, after Pearce had made his pass he was brought down and pinned to the ice by Roy, causing the referee to signal a delayed penalty before the goal was scored.

The Clan forward received two minutes for interference and headed for the dressing room as there was only 31 seconds left on the clock but after the restart, Pacha’s side held firm to confirm the victory.

Those vital two points lift Dundee off the bottom of the table and they now have four days to get ready for their next game as they visit the Nottingham Panthers on Wednesday evening.