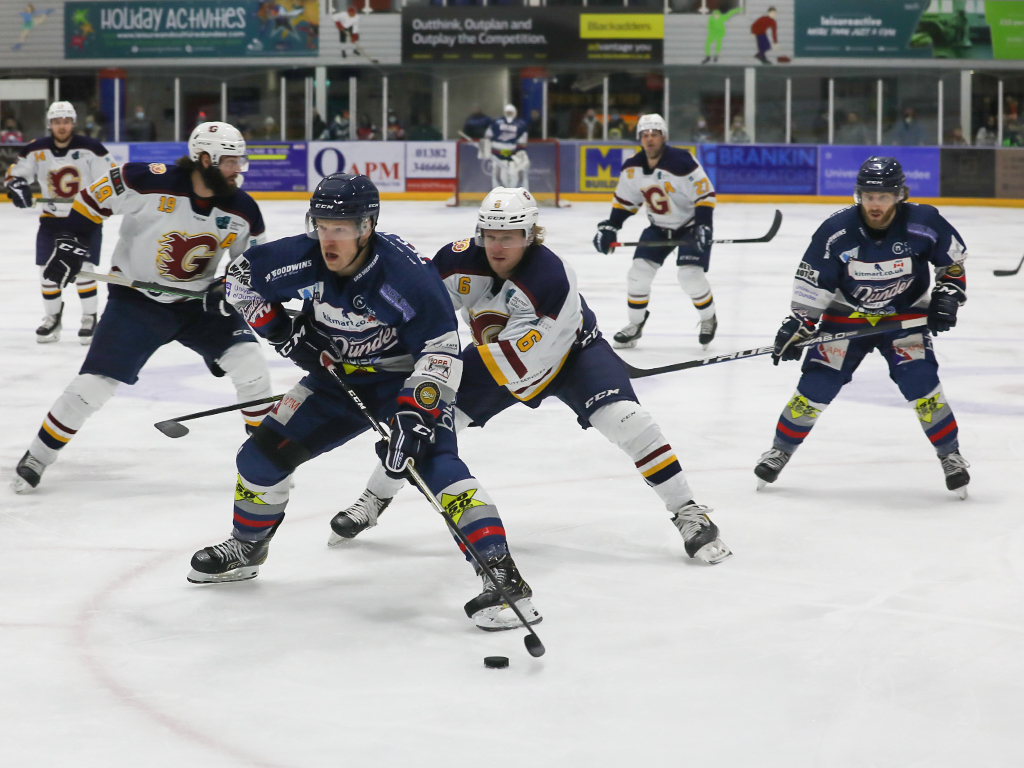 The Kitmart Dundee Stars made a third period comeback to force Guildford Flames into a shootout but were unable to claim both points, as they were beaten on penalty shots.

It took seven minutes before the first clear cut chance came and it fell the way of Sebastian Bengtsson as he was given a wide open net to shoot at after his Dundee teammates, Charlie Combs and Philippe Sanche had put some shots in on goal.

As the rebound fell to Bengtsson, Flames goaltender, Kevin Lindskoug made a swift recovery from his first save and got his glove up to deny the Swede of the opening goal.

However, the first goal of the night would come just three minutes later, when Guildford’s Ian McNulty got on the end of Alex Yuill’s pass and broke forward.

McNulty then skated in on goal and wasted no time in shooting the puck under the legs of Adam Morrison to put the visitors in front.

Paul Dixon’s men then held the Stars under pressure for a short period time and it all paid off as Robert Lachowicz doubled their lead on 12 minutes.

The Brit combined passes with Chris Gerrie as they moved into the Dundee end and the last pass set Lachowicz up to finish from close range.

Despite a late powerplay chance for the home side, as Brett Ferguson was punished for a hooking foul, but the Stars failed to make the extra man count and the first period ended with the Flames up by two.

Omar Pacha would have been pleased to see his side come out and pull one back in less than seven minutes, as Dundee’s two Finns connected and Timi Lahtinen blasted a shot high past Lindskoug.

Although, Guildford would restore their two-goal cushion through John Dunbar in the 34th minute.

Dunbar had been given time, space and possession in front of the Dundee net and he wasted no time in sending a rising shot over the shoulder of Morrison.

The Surrey side were still 3-1 ahead going into the third period but the Tayside team finally found their mojo and began to take control of the game.

All their hard work culminated in two goals that came just 17 seconds apart and put them back on level terms.

Combs netted the first as he was the quickest to react after the rebound from Connor Sills’ shot spilled out to the side of the goal and the American quickly tucked it into the back of the net, on 47 minutes.

Then Sanche quickly bagged the equaliser as he and Combs sped forward into the Guildford end, before Combs slipped a pass between two defenders, allowing Sanche to catch the keeper off guard and bury the puck into a wide open goal.

Neither team would then be able to find the net again during open play, as the rest of the third period and the whole five minutes of three-on-three overtime passed without a goal.

Thus, a shootout was required to decide the winner and after nobody could score in the first five shots, Guildford’s Jamal Watson buried his effort to give the English club the first advantage.

Then both sides would fail to score in the fourth round and that put all the pressure on Bengtsson to keep his side in the game, but the Swede calmly stuck the puck past Lindskoug to keep the game alive.

It then came down to the final shot before sudden death and Jake Bolton had the chance to win it for the Flames and he did just that with a cool finish past Morrison.

The Stars now have to regroup and build off a tough weekend of close defeats as they face Belfast Giants twice at home on Friday and Saturday.