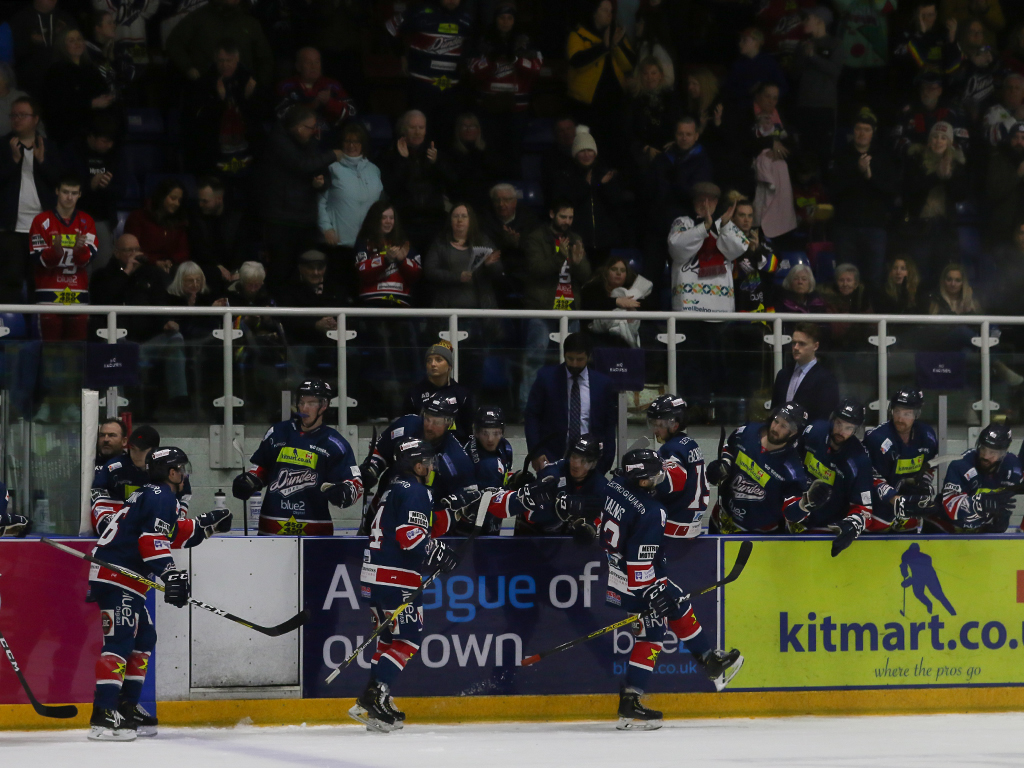 The Kitmart Dundee Stars needed two points at home to keep their chances of making the playoffs high as they took on the Guildford Flames on Sunday night.

There was an early powerplay chance for the Stars after just three minutes had been played, as Guildford’s Ian Watters was punished for a kneeing foul.

Dundee worked the Flames goaltender, Travis Fullerton well and forced him to make a few key stops that would keep the match scoreless but it was then his opposite’s turn to deny the first goal.

Dundee’s Alex Leclerc came up with a big stop to keep out Kruise Reddick after he was played in by Watters and then the action went straight back up the other end, with Fullerton denying Egils Kalns the opener with a diving save down to his left post.

However, the stalemate was broken after the Flames were caught on a bad line change in the 10th minute.

Anthony Beauregard took possession at halfway line for the Stars and he skated forward into the Guildford end down the right flank.

That was enough to draw the attention of the only three Flames players on the ice and once he lured them in close enough, the Canadian sent a pass across to Matt Marquardt and he picked out the far top corner to give the home side the lead.

Although, the Tayside team were not in front for long, as in the 12th minute, John Dunbar put a shot on target and after Leclerc saved it, Braylon Shmyr broke away away from his marker and tucked in the rebound.

The Stars went back on the powerplay after Jesse Criage of Guildford was sent to the sin bin for high-sticking after 14 minutes.

Again, the visitors killed off the penalty but they were in more penalty trouble as Owen Griffiths sent Dundee’s Jagger Dirk into the end boards, drawing a tripping penalty.

However, Dundee retained possession and got an extra attacker out to go in search of a goal, while the Flames were unable to carry possession.

That allowed Marquardt to find another way past Fullerton inside the final two minutes of the first period, as the Scottish club took advantage of the extra skater situation.

Brett Stovin squared a pass across to the right for the Stars captain and he slotted the puck into the bottom right corner before the Flames keeper could get across.

In the second session, the road team quickly tied things up, as Shmyr bagged his brace in the 22nd minute after he finished off a quick passing move with a fast shot into the bottom right from the slot.

After seeing out a tripping penalty against Drydn Dow, the Stars got back in front once again, this time Jordan Cownie played in Egils Kalns and he held possession for a few seconds before releasing a quick shot from straight in front of goal on the 30 minute mark.

It looked like Dundee would add a fourth goal and extended their lead but with Dow back in the box for interference, Paul Dixon’s side punished their hosts.

Shmyr was on for a hat-trick and skated down the left side towards net, this pulled Leclerc out of the goal and after rounding the netminder, Shmyr played  a pass in front for Jamie Crooks to tap in on 32 minutes.

Dundee went straight back on the penalty kill as Kalns interfered with the skating path of Dunbar but after the whistle the pair had a small tussle, earning them both two minutes each for roughing.

Omar Pacha would not have been happy to be handing another powerplay chance to the Guildford powerplay unit that had just punished his side but he would have been delighted when Stovin pushed home the shorthanded goal in the 35th minute.

Dufour and Stovin broke down the ice after Dundee won back possession in their own end, Dufour took the first shot which flew past Fullerton but rebounded off the post and back towards the keeper but Stovin won the race to the loose puck and poked it home to put the Stars 4-3 up.

Although, Leclerc made a key stop with his leg to deny Watters of another equaliser and that made sure the home side held the lead going into the final period.

The Stars came out with good intensity and came close to scoring the next goal, however two penalties against Anthony Beauregard had to be killed off and Dundee did managed to protect their lead whilst a man down.

Although, in between the two minor penalties, there was another big chance for Watters to draw his side level but again Leclerc kept him out.

The Stars still led by one going into the final two minutes and with 90 seconds remaining, Dixon subbed Fullerton for an extra attacker but their attack was abruptly ended when Criage’s shot struck his teammate, Reddick in the head and a stoppage to clean up the trail of blood allowed both sides to rest and draw up a plan for the final 63 seconds of play.

Fullerton was again pulled but Dundee held out to claim an important victory but with Manchester Storm beating Fife Flyers 4-3 after penalty shots, the Stars remain just a point outside the playoff sports.