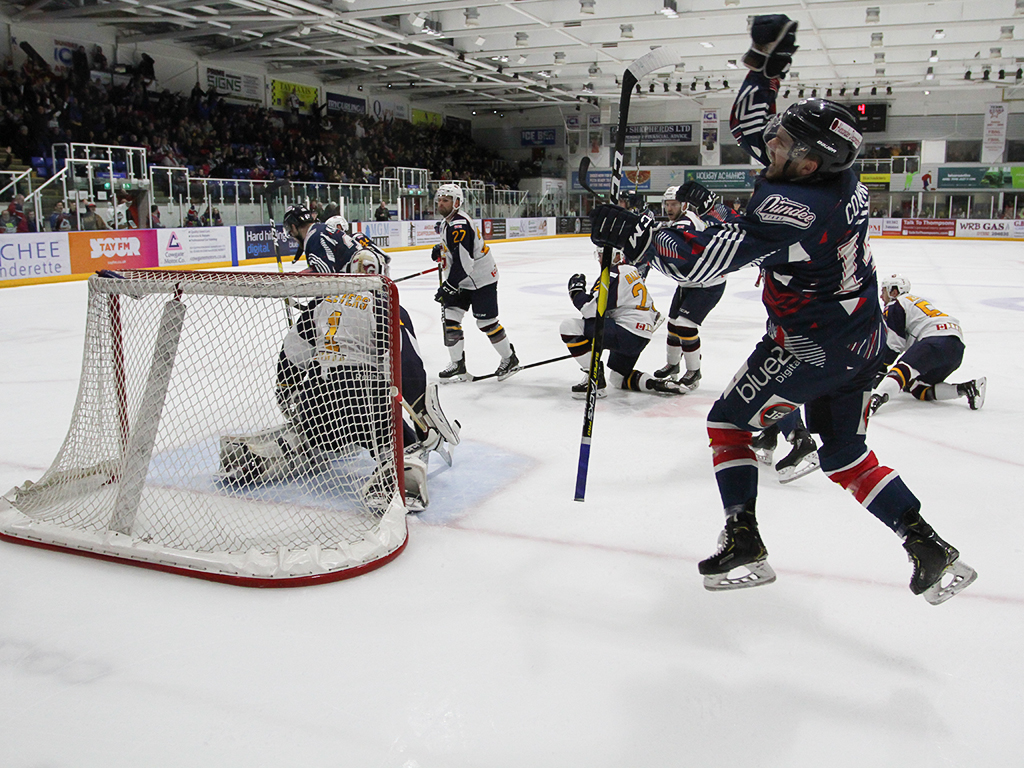 The Kitmart Dundee Stars were expecting a fast start from a revenge seeking Guildford Flames side and that’s exactly what they got as Brett Ferguson flicked a shot through traffic in front of the Dundee net and it beat an unsighted, Alex Leclerc in the third minute.

However, the home team were not disheartened by the early goal as they forced a lot of turnovers and turned them into chances but Flames goalkeeper, Wouter Peeters was making an impressive start to his first ever game against the Stars.

The first powerplay of the match was awarded to the visitors after Dundee’s Matt Carter was caught slashing his opponent in the 10th minute but Guildford would not extend their lead whilst on the man advantage.

Throughout the rest of the opening period, each team had their chances but Dundee dominated in possession and had most of the scoring opportunities but it was a few defensive errors that allowed Paul Dixon’s men to get in behind and cause some trouble.

However, the Flames could not beat Leclerc again and the only thing stopping the Stars from getting on the board was a few key stops by Peeters and a lot of deflections in front, that were turning away a barrage of shots.

Although with less than two minutes to go in the first stanza, the Stars captain, Matt Marquardt picked out Carter, who was rushing forward and reached him with a lofted pass that slipped through the chasing defenders.

Carter sped away and once just a couple of feet away from Peeters, he dispatched the puck across into the bottom left corner and that left the two teams still tied after one period.

In the second session, Guildford were given another man advantage as a delay of game foul cost Dundee one of their skaters for two minutes but despite showing a further threat to the Stars goal, they could not find another way past Leclerc.

The home team then had their first turn on the powerplay as a Corbin Baldwin was penalised for slashing and it quickly became a five-on-three powerplay as Ben Davies was punished for a face-off violation.

After working the puck around the zone for a long time, Dundee finally put the puck in the net again and forward, Egils Kalns was the scorer.

The Latvian winger blasted a cross-ice pass from Drydn Dow as soon as it came to him and from the left side of the ice, he beat the Flames keeper low on his near post in the 28th minute.

The Tayside team still had some time left on Davies penalty but were unable to slip the puck past Peeters again before the Surrey side returned to full strength.

Later in the middle session, there was a big chance for Marquardt to increase his team’s lead as he drove towards the Guildford goal with no defenders in his way but he could not  jam the puck past Peeters before colliding with the Belgian.

Depsite his efforts to stop and avoiding the collision, the referees handed Marquardt a penalty for goaltender interference but the Stars again escaped the danger of conceding whilst a man down.

More questionable calls came in the 36th minute as both Dundee’s Kevin Dufour was called for a slashing foul but his victim, Ferguson was also punished for diving.

With each side down to four skaters, the English club drew level with a very lucky deflection in the 37th minute.

A scramble for possession in front of Leclerc’s goal ended with Guildford’s Jordan Rowley firing the puck across goal but the shot struck the leg of Stars defenseman, Reilly O’Connor and went into his own net.

Nevertheless, Dundee were able to quickly regain their lead as Colton Kroeker burst down the right wing and sent his shot past Peeters on 38 minutes.

The second intermission came with the Omar Pacha’s men leading by one but the road team quickly made up the difference in the third stanza.

TJ Foster fled down the left wing with possession and once in the Stars end, fired a shot with pin-point accuracy as he found the top right corner after 43 minutes.

Dixon’s men then capitalised again three minutes later to regain their initial lead and this goal was netted by Kruise Reddick.

A long-range pass from Joshua Waller found Reddick in behind the Dundee defence and he raced away before pulling Leclerc to the right side of his goal and finishing into the left.

Guildford were put under some late pressure by their own players as a pair of Flames ended up in the sin bin but even though they managed to protect the lead until they regained full strength, Dundee’s dangerous defenseman, Drydn Dow still rifled home the equaliser on 54 minutes.

The last chance in regulation went to the Stars as Dufour released a shot that hit Peeters and dropped in front of an unprotected part of the Guildford net but a smart defensive play by Jesse Craige, saw him quickly dive to the ice and pokes the danger away.

A last-minute tripping foul left the team from South London short once more, however they managed to hold on and claim at least a point.

There was not many game-winning-chances in overtime, as the Stars failed to utilise their remaining time on the powerplay but Craige had gone close as he backhanded a loose rebound just wide of a gaping Stars net in the 62nd minute.

A shootout was required and Kalns got Dundee of to a perfect start as he beat Peeters with a high glove side finish before Leclerc denied Calle Ackered, who brought out some fancy moves before being denied by the toe of the Stars keeper.

Marquardt failed to score as he searched for an opening in the top left corner and Ian Watters was unsuccessful with a low wrist shot that bounced off the blocker of Leclerc.

Carter was unlucky to see his shot rebound off the right post after beating the Belgian shot-stopper but Braylon Shmyr tied the score at 1-1 as he sped past the Stars goal and as he crossed the crease, he slipped the puck through the Dundee netminder’s five-hole.

Dufour’s low shot was denied by Peeters leg pads and Jamie Crooks’ effort became stuck under Leclerc before Beauregard stepped up and netted to give Stars their advantage back.

The Canadian fired straight into the top right corner with ease and his fantastic effort was backed-up by a save from Leclerc, as Foster’s high shot was stopped with a blocker save.

Another win over the Flames has lifted the Stars off the bottom of the Elite League table and sets them up nicely to challenge for a four-point weekend as they visit Cardiff Devils on Sunday.