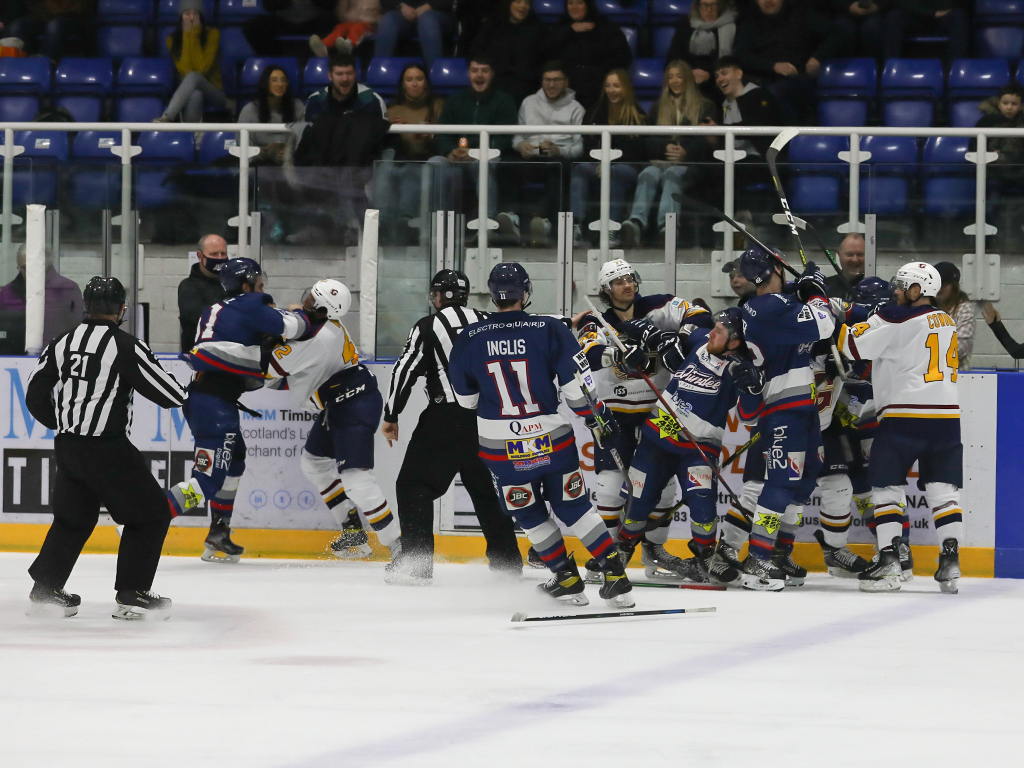 The Kitmart Dundee Stars were burnt out by Guildford Flames on Saturday night, as the Surrey side claimed a 5-0 victory on their final regular season visit to the DIA.

New signing, Kalvis Ozols made his debut in front of the Stars fans as Omar Pacha put out a full strength line-up, with spare players, Alexandre Ranger and Caly Robertson being scratched.

The first goal of the night would come after just 11 minutes, as Guildford defenseman, Alex Yuill hit a slapshot through traffic and the puck flew past the unsighted Adam Morrison, in the Stars net.

Ian McNulty would then double the visitors lead just four minutes later, as he redirected Jamal Watson’s long-range shot past the Dundee goalie.

Paul Dixon’s men would still have a two-goal lead after the first period and they would eventually extend their advantage late in the second session.

Just as both teams returned to full strength after serving a few penalties, the Flames caught the home team out on a quick break, where Brett Ferguson picked out Chris Gerrie for a back-post tap in, on 36 minutes.

Then, just moments after the Flames third goal, Jamal Watson laid a heavy hit on Dundee’s Craig Garrigan and that sparked an instant reaction from Spencer Dorowicz and Charlie Combs, who immediately came to the defence of their teammate.

Dorowicz quickly dropped the gloves and began throwing fists with Watson as the pair squared off, while Combs tied up with Levi Cable, resulting in the pair getting minor roughing penalties, while Dorowicz and Watson were served majors.

In the third period, the Stars again failed to get on the board and would give up another two goals, this time it was Robert Lachowicz as his attempted pass was deflected into the Dundee net by Quinn O’Brien’s knee in the 49th minute.

John Dunbar then rounded off the scoring with a silky finish past Morrison on 52 minutes and that now sets up a desperation clash with Fife Flyers on Sunday night for Dundee.

The Stars face their biggest rivals in Kirkcaldy and with the Flyers losing to Glasgow Clan in overtime, both teams will be very hungry to secure a crucial win and the latest set of bragging rights.