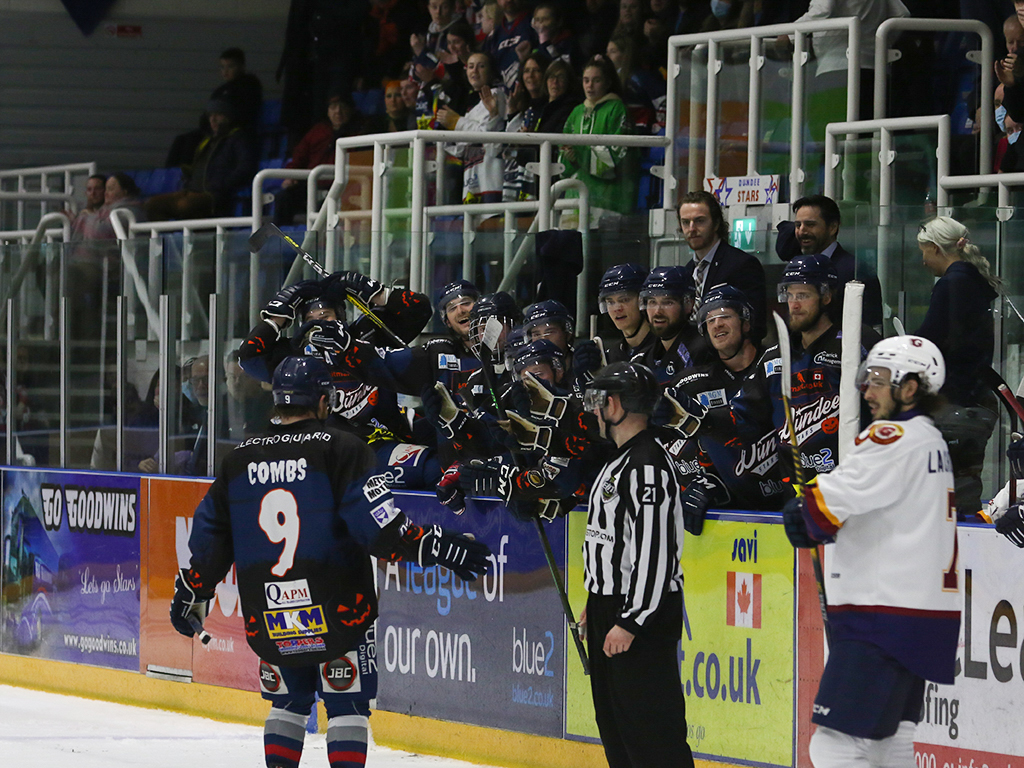 The Kitmart Dundee Stars kicked off their weekend with a massive 7-0 win over Guildford Flames on Saturday night, whilst wearing their limited edition Halloween jerseys.

The Stars came out and put the Flames straight onto the defensive and after a lot of early pressure, Dundee’s Charlie Combs came close to opening the scoring as he struck the post.

However, they would finally get their deserved go-ahead-goal on eight minutes, when Kris Inglis saw his shot ricocheted into the net via the head of Connor Sills.

Despite giving up a few chances to Guildford, Adam Morrison and the Stars defence stood strong to deny the visitors an equalising goal.

Dundee would then make the Surrey side pay for not capitalising on their chances, as Gabriel Desjardins doubled the Scot’s lead with a low shot in the 17th minute.

There would then be only one goal scored in the second period and it went the way of Omar Pacha’s men.

After fending off the Flames who had a brief man advantage, the Stars then added their third of the night through Kyle Haas, who poked home Combs’ cross-goal pass, on 25 minutes.

Both clubs ran into penalty trouble during the final part of the second session but neither team could make use of their powerplays and that left Dundee still 3-0 ahead after 40 minutes.

Paul Dixon needed a response from his side in the third period if they hoped to take anything from the match but the Tayside team continued to shut them down and eventually secured their first league win of the season in the 54th minute.

The Stars fourth goal came from Combs as he made a flashy move around one Flames defender before completing his solo effort by firing a quick shot past Guildford goalie, Kevin Lindskoug.

Dundee then added a pair of quick goals to make it 6-0 on 55 minutes, as Dillon Lawrence netted his fifth of the season with a sneaky shot at Lindskoug’s near post and Spencer Dorowicz deflected another one past the Swede, 35 seconds later.

With Adam Long subbed on to replace Lindskoug, Lawrence would then round off the scoring at 7-0 by bagging his brace in the final minute of play, as he turned home a rebound from close range.

It was an emphatic first regular season win for the Stars but also a much needed one and next up for Dundee is their final Challenge Cup Group Stage fixture, as they head to Kirkcaldy to face the Flyers with qualification already secured.