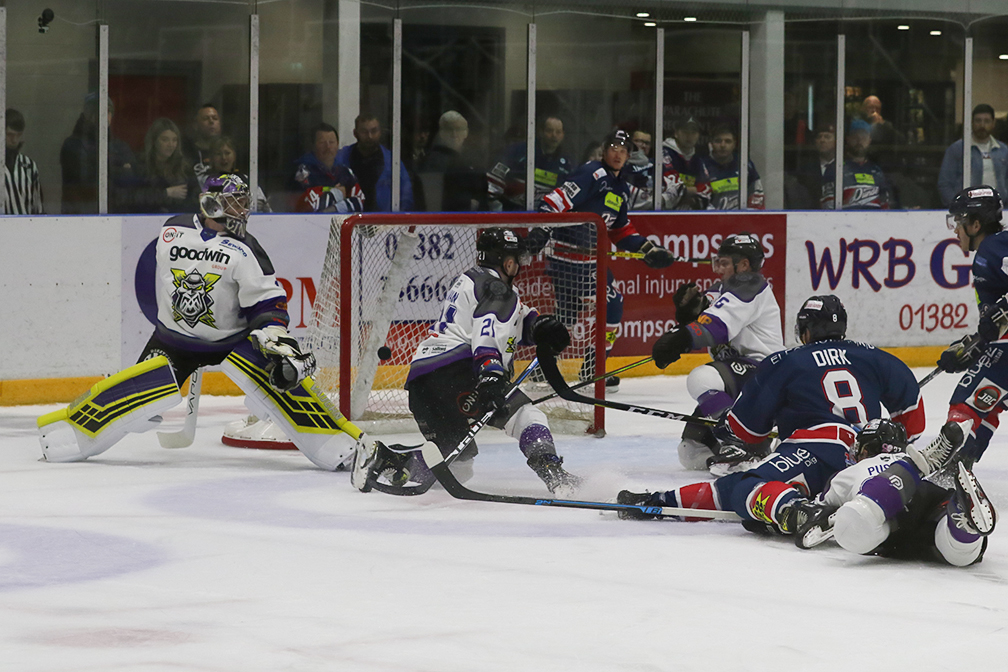 The Kitmart Dundee Stars claimed an important victory at home as they beat the Manchester Storm 4-3 to move two points clear of the bottom of the table.

Defenseman, Kris Inglis did make his first appearance after missing the last six games with an upper body injury.

The match did not start how Stars head coach, Omar Pacha would have wanted it to, as the Storm scored the first goal in the opening minutes.

Dallas Ehrhardt fed the puck to Tyson Fawcett and from high in the slot, the Manchester forward let rip on a shot that beat Dundee goalie Alex Leclerc in the fourth minute.

Ryan Finnerty’s Storm side blew a five-on-three powerplay chance late in the first period as with the home team’s Reilly O’Connor and Shawn Boutin in the box they failed to add to their lead.

However, Jared Aulin would enter the visitors sin bin twice before the first break but luckily for the Canadian, Manchester would still be 1-0 up after the first period.

Although, that was mostly down to both goaltenders putting in fine performances early in the match and the Stars did apply some late pressure on Matt Ginn but he was able to deny them in the final few seconds to keep his side ahead.

The Storm goalie was called into action again in the opening minutes of the second session as Dundee’s Justin Maylan and Matt Marquardt forced some early saves from Ginn.

Raymond Grewal entered the Manchester penalty box in the 26th minute for a tripping foul but the Stars man advantage would not last for long as Egils Kalns was then penalised for a similar foul moments later.

However, Manchester forward, Layne Ulmer was caught holding on to his opponents stick and the put Dundee back on the powerplay and gave them some the momentum they needed.

After creating some good chances on the powerplay, the home side were in the driving seat and would tie the game just after their man advantage expired.

Marquardt was the fastest player to react to the rebound of Drydn Dow’s shot and wasted no time in slamming the puck under Ginn in the 29th minute.

That equaliser gave Dundee the confidence boost they needed and from there they began to look like the dangerous attacking team that they proved at the start of the season they can be.

Then just 18 seconds after they tied the game, the Stars took the lead through Brett Stovin.

Jordan Cownie had played a pass across to Stovin who was just ahead of the Manchester defender and he quickly sent the puck past Ginn with a lovely wrist shot to the glove side.

Although, the team from Altrincham were handed a chance to draw level as Kalns was punished for tripping up Aulin on a breakaway, resulting in a penalty shot.

Mario Puskarich was sent out to take it but the American could not find a way past Leclerc at the halfway point.

The Tayside team would reward Leclerc for his big stop with another goal to put them 3-1 ahead.

Despite Ginn making a few saves in build up to the goal, he was caught out of position for when the goal-bound shot was taken.

Kevin Dufour had played Colton Kroeker in on goal and he tried to beat Ginn but went too far past the post, so played the puck back to Jagger Dirk and he had a wide-open net to shoot at.

Dirk made no mistake and increased the Stars lead on 35 minutes but 20 seconds later, Manchester were back in contention as Grewal put  a shot on target that appeared to be deflected past Leclerc.

The road team were now only a goal behind and after the second intermission they came out firing and were rewarded for their efforts.

Both netminders had made important saves at the start of the period before Boutin was sent to the box in the 46th minute for holding one of his opponents sticks and that gave the Storm the powerplay opportunity they needed to get back on level terms.

Aulin was the provider for Finnerty’s men and it was a wonderful goal to watch as he slithered his way through Dundee’s shorthanded defence before quickly sending the puck into the top right corner.

Yet, all of Manchester’s hard work to get back to 3-3 came undone as with just over three minutes to play, Kalns scored what proved to be the game-winning-goal.

Cownie was again the main play creator as he sent the puck across goal before it was turned wide by Stovin and landed behind the Storm goal where Kalns picked up possession.

From there he rapidly made a move towards the front of the goal and just as he got past the post, the Latvian sent his shot straight under Ginn to put the Stars 4-3 ahead.

Dundee held on to secure two vital points and push themselves ahead of the last placed Storm by two points but now they must continue to collect points when they visit Fife Flyers on Sunday if they want to catch up to the other eight teams in the Elite League.