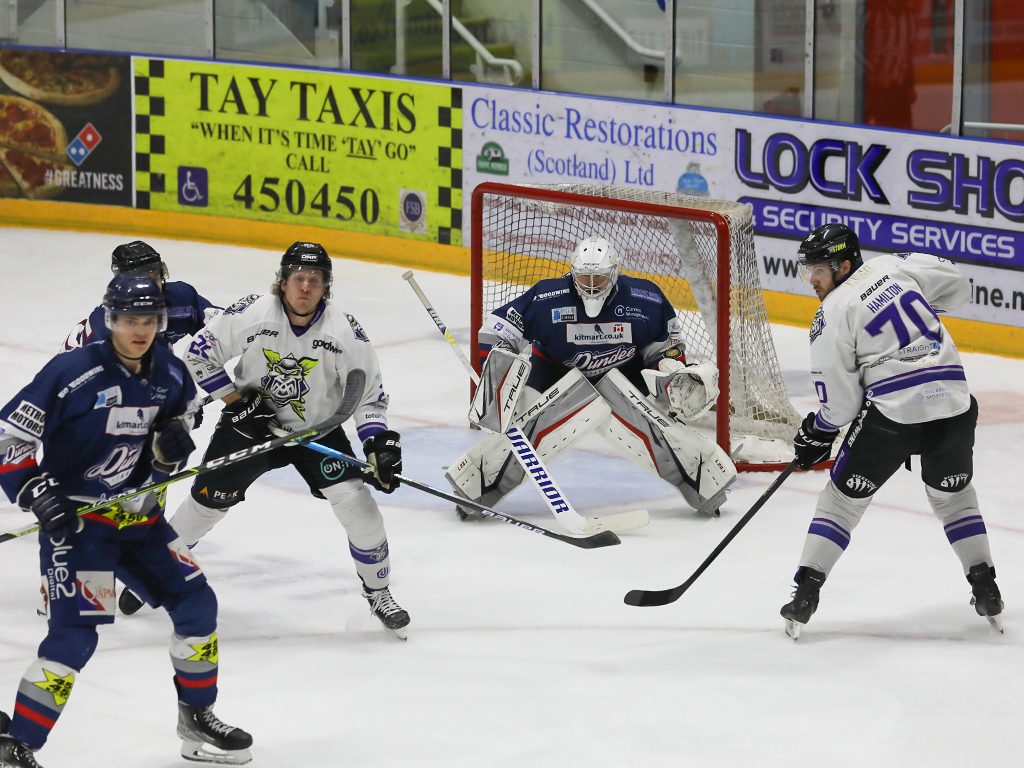 The Kitmart Dundee Stars secured a vital two points against Manchester Storm on Thursday night  and made a winning start to their return from a second period of COVID isolation.

The Stars took an early lead after just five minutes and some sustained pressure, as the opening goal came via Charlie Combs.

The American forward was unmarked in front of the Manchester goal and was left free to turn in the rebound from Spencer Dorowicz’s shot that cannoned off the pads of goalie, Jason Bacashihua.

The visitors were then hit with another blow just minutes later when they thought they had converted on the powerplay to equalise, but the goal was eventually disallowed following a video review by referees Daniel Ferguson and Steve Brown.

Both teams would then have some time on the powerplay but neither could capitalise whilst having a man advantage and despite a strong start and dominant opening 20 minutes from Dundee, they still led by a lone goal going into the first break.

The two teams would then exchange chances at either end in the opening minutes of the second session before the next goal came after 26 minutes.

Manchester would tie the game through Tyson Fawcett as he was able to chip a rebound in at the back post of Adam Morrison’s net.

Although, the Tayside team almost instantly retook the lead as Dundee’s Alexandre Ranger broke free but saw his effort from close range denied by Bacashihua.

There was then a four minute powerplay for the Stars as Sebastian Bengtsson was cut open by the stick of Adam Brady, but Dundee failed to produce whilst on the pro-longed man advantage.

However, just moments after Manchester returned to full strength, Connor Sills restored the home side’s lead by beating a diving Bacashihua with an easy finish at the far post.

After a few spells of intense physical play, more penalties began to be called again but once more both teams survived unscathed and each side would start the final period a player down as roughing and slashing penalties were handed out at the end of the middle stanza.

Dundee were again the team on top in the final 20 minutes as they pushed to extend their lead, but the Storm would not go away and kept the game tense until the dying minutes.

After killing off three consecutive minor penalties, the Stars were finally able to wrap up the game and the two points in the final minute, as Ryan Finnerty gambled his goalie for an extra attacker.

Then with just 14 seconds left on the clock, Timi Lahtinen chipped the puck down ice for Dillon Lawrence to rush on to and slide home into the gaping goal.

Although, the scoring was not finished there and Dundee grabbed a fourth goal 11 seconds later to make it a 4-1 score line, as Sills broke forward and switched a pass across to Bengtsson for a first time finish at the backdoor.

It was second time right for the Stars as they started off their second return from isolation with a crucial win that lifts them back into eighth place and the playoff spots in the league table.

Next up for Omar Pacha’s men is two more home games this weekend, as they face their Scottish rivals Glasgow Clan on Saturday and the manager-less, Nottingham Panthers on Sunday.