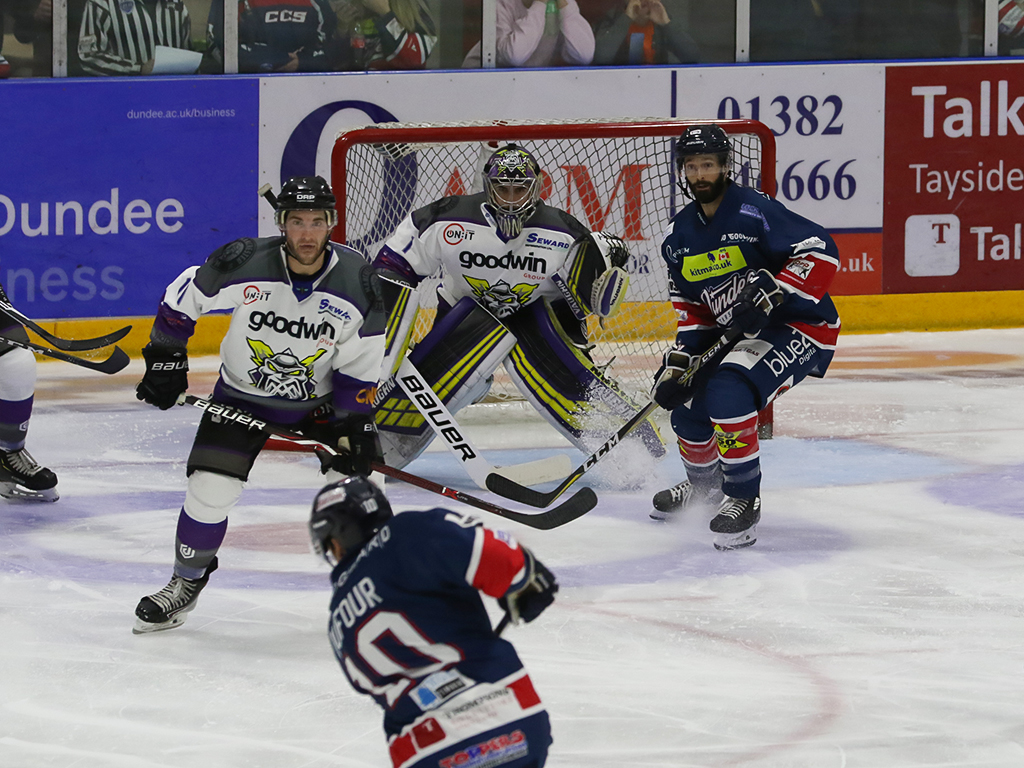 The Kitmart Dundee Stars claimed their second four-point weekend of the season after beating Manchester Storm 5-3 on home ice.

Defensemen, Jagger Dirk and Reilly O’Connor missed out on the whole weekend with injuries and forward, Brett Stovin who dropped back to help cover the gaps in defence, left Saturday’s game with an injury,

That left Dundee with just four defenders but Duncan Speirs dropped back to help out on Sunday.

The Stars made a quick start and were in front after just 62 seconds thanks to Kevin Dufour who went through on goal and made Manchester goalie, Matt Ginn move before sliding the puck underneath him.

In the 12th minute, Egils Kalns deflected Drydn Dow’s shot past Ginn to double Dundee’s lead and they would hold the two-goal cushion until the first break.

The Taysiders were able to maintain that margin until the final minute of the second period as the Storm got off the mark with a powerplay goal.

With Drydn Dow in the box for a tripping foul, Scott Simmonds blasted a shot past Alex Leclerc from the slot.

Omar Pacha’s would then see his players go out in the third period and storm into a 4-1 lead.

Dufour netted his second goal and his fourth of the weekend on 44 minutes with a quick finish from in front of the Manchester goal after being left unmarked.

The Stars captain then added the fourth goal less than two minutes later as he cut out John Negrin’s pass in the Manchester end and moved forward to beat Ginn on his blocker side.

Ryan Finnerty’s side managed to pull two goals back as Layne Ulmer was able to slip the puck under a sprawling Leclerc inside 50 minutes before Dallas Ehrhardt snuck down low to blast home a cross ice pass in the 57th minute.

The Storm captain capitalised on the powerplay given to his side after Duncan Speirs was boxed for interference.

However, with 12 seconds to play, Anthony Beauregard wrapped up the points for Dundee as he picked out the empty Storm net from his own end of the ice and it was his second long range empty net goal of the weekend.

Dundee made it two wins out of two in what would have been classed as an extremely difficult weekend before hand with the injuries in their defensive department.

Next up for Dundee is a double-header with the Guildford Flames. Tickets can be bought HERE for Saturday nights game, Face Off 7.00pm

Tickets are on sale now for our next home game versus Guildford Flames, buy them HERE!