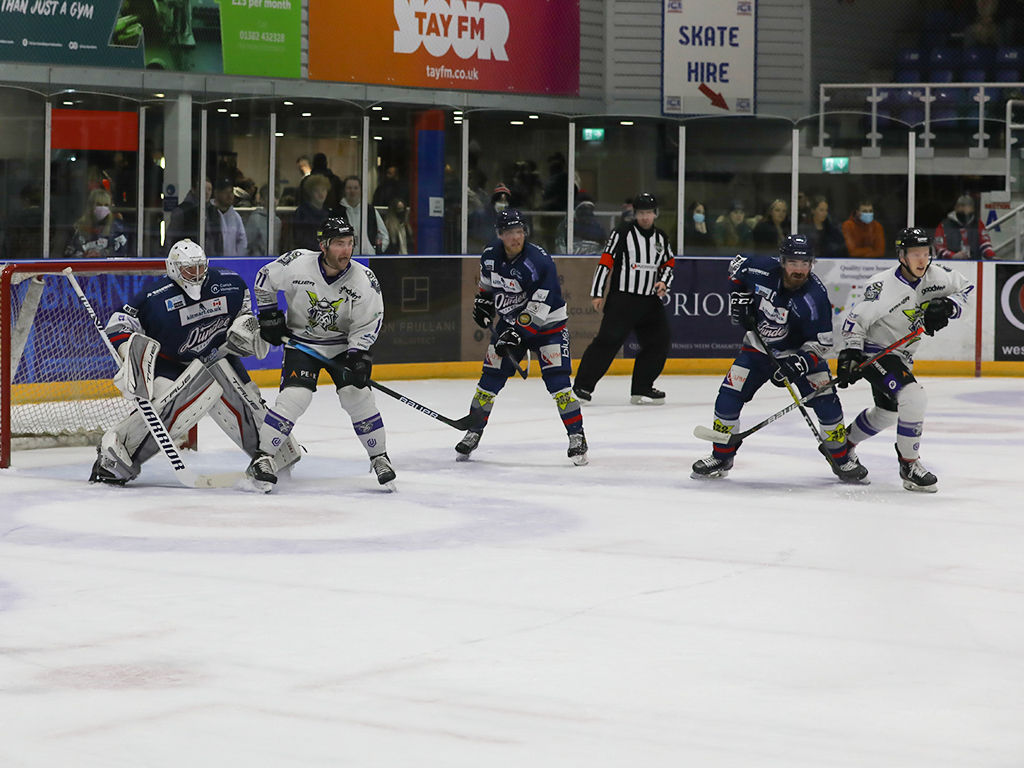 The Kitmart Dundee Stars had the chance to climb further up the Elite League table as they hosted Manchester Storm on Saturday night and they were boosted by the return of defenseman, Kris Inglis to the line-up.

A fight in the opening minutes between Kyle Haas and Manchester’s Linden Springer, set the tempo for the night as both teams spent a lot of time in the penalty box.

Dundee were the first to capitalise on that opportunity as Spencer Dorowicz turned home the pass of Charlie Combs at the back post, on nine minutes.

Dorowicz then quickly added a second powerplay goal just four minutes later, as he was once again the man left open in front of goal and this time he took Sebastian Bengtsson’s pass past Jason Bacashihua in the Strom goal.

The home team still led 2-0 after the first 20 minutes of play and the Stars then swiftly made it a three-goal advantage, early in the second period.

Following a turnover by Manchester high up the ice, Combs combined with Philippe Sanche as the pair took the Stars forward.

Just 90 seconds after the restart, Sanche would eventually beat the keeper with a fast and rising wrist shot from between the circle.

However, that would be the end of the Tayside team’s dominance and Ryan Finnerty challenged his side to make the comeback.

As the match reached the halfway mark and with both teams down to four skaters, Tyson Fawcett was the first to strike for the Storm with a rocket of a shot from in the slot.

Despite many more penalties against each team, the score remained 3-1 in favour of Dundee after two periods, but in the third session, Manchester came out hard and quickly put themselves on top of the Stars.

Inside the 49th minute and with the visitors on a four-on-three powerplay, Austin Albrecht picked out Jarod Vanwormer as he drifted between the Stars defence, before turning the puck up and over the shoulder of netminder, Adam Morrison.

The game then entered the dying moments and the Storm became desperate for an equaliser, which is just when Frankie Melton produced a cheeky effort that caught the Stars off guard.

After rounding the net, Melton quickly released a sneaky wraparound shot at the near post, which snuck under the unexpecting Morrison to tie the game on 57 minutes.

The two teams were then deadlocked for the remaining three minutes and all the way through three-on-three overtime, with penalty shots needed to find the winner.

First up was Manchester’s Adam Brady and he opened the shootout with a goal, as he combined pace with accuracy to beat Morrison up high.

Dundee’s Connor Sills would then be denied by Bacashihua, before Cameron Critchlow and Combs would both fail to score.

Two goals then followed in the third round, as Fawcett netted again after waiting out Morrison and finishing over the sprawled out Canadian.

Then Sanche also bagged another goal, as he drove the Storm goalie backwards before sending his shot into the top right corner.

Melton and Bengtsson were the next to have their efforts turned away by the keepers, before Curtis Hamilton saw his attempt denied, leaving the pressure on Dillon Lawrence to keep the Stars in the game.

The Canadian center had Bacashihua beat but not his goalpost and saw his effort bounce off the metal frame to hand the Storm the extra point.