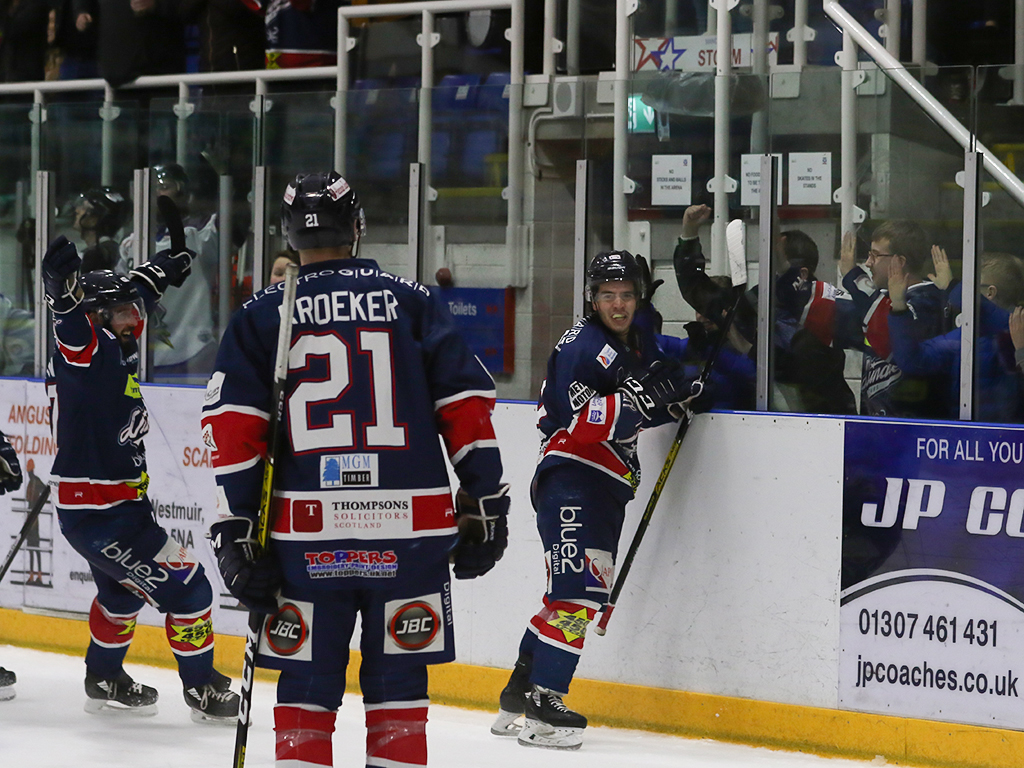 The Kitmart Dundee Stars welcomed the Manchester Storm to the Dundee Ice Arena on Saturday night for a crucial playoff battle, as the Stars continued to try and hunt down the Storm and climb into a playoff place.

Dundee made the better start and after less than two minutes of play, Stars forward, Colton Kroeker played in Anthony Beauregard for the first scoring opportunity of the night but Matt Ginn in the Manchester goal was able to deny him.

Although, at the other end, Dundee netminder, Alex Leclerc was beaten by the shot of Scott Simmonds in the sixth minute but his goal was not given after a delayed penalty had been called against the Storm just seconds before.

Manchester’s, Ivan Sijan blocked the skating path of Shawn Boutin and that meant he was punished with a two minute penalty for interference and that cost his side the opening goal.

There were a few big chances for the home side on the powerplay but Ginn was stopping everything the Stars powerplay unit could throw at him and once back to full strength, the Altrincham side were bailed out by their keeper again, as he made a double save to keep Kevin Dufour’s efforts out.

After making a few more stops, Ginn was given a breather as the visitors got forward and forced the Dundee goaltender to also make a pair of saves, when Cody Thompson and Henrik Samuelsson both tried to beat Leclerc at his right post.

The rest of the period passed with both teams continuing to exchange chances but there was still no score, although Leclerc was left scrambling as he tried to cover up a loose puck which was pinballing off players in front of him but the Dundee eventually cleared the danger.

The first period ended how it started, tied at 0-0 and when the teams came back out for the second session, the road team quickly found a lead.

After just 24 seconds had been played in the middle period, Frankie Melton circled the Stars goal before skating out towards the blue line and from there, he released a rising shot that flew through traffic and into the back of the net.

Dundee were given another powerplay chance, straight after they conceded but Omar Pacha’s powerplay unit were still unable to crack the Manchester defences and there powerplay was cut just short as they picked up a minor penalty for having too many skaters on the ice.

The Tayside team also killed off their penalty before there was some more back and forth, but after 31 minutes, Dufour fired home Dundee’s equaliser.

Thompson was in the box for boarding and with the man advantage, Beauregard rounded the Storm goal and came back out in front before sending a pass across from the left wing to the right, where Dufour was waiting to hit the puck, first time past Ginn.

The home team could have taken the lead as they had a few scoring opportunities just after the restart and the best chance came when a big hit won possession back for Dundee and the Stars worked the puck well through their opponents defence.

Possession came to Dufour and he waited out Ginn but the keeper kept the Stars forward to the outside and made his angle tight, meaning Dufour’s attempted pass back in front was intercepted by a Storm defender.

There was then a few penalties for both sides but when the period ended, they still could not be separated and Ryan Finnerty’s men would start the third stanza with some remaining powerplay time.

The Scottish club seen out the remaining time on Brett Stovin’s slashing minor and after that, they dominated the play, creating multiple dangerous attacks.

Despite Dundee’s chances, the search for the go-ahead-goal continued but the best opportunity of a bunch involved the Stars captain, Matt Marquardt and Stovin.

The pair made a break down each wing and Marquardt sent a pass across to Stovin, who was coming in at the right post but the Canadian center was unable to turn in the pass on 47 minutes.

Then moments later, Kroeker broke through on goal but he sent his shot just wide of the target and as play went the other way, Leclerc made a crucial save to keep Simmonds’ shot out.

The Canadian goalie pulled his trapper out of nowhere and got it across at the last second to cover a wide open goal and to keep the game tied in the 51st minute.

However, Pacha’s side finally beat Ginn again and took their first lead of the night through Beauregard in the 57th minute.

Drydn Dow made the breakout pass form his own end across to Dufour on the left wing and he moved the puck into the Manchester end.

Dufour then played Beauregard in behind the Manchester defence and he coolly dispatched a backhanded shot into the goal after skating past Ginn.

Finnerty used his timeout to create a last minute plan of attack and left his goalie on the bench in favour of an extra attacker.

However, the Stars then sealed the victory with an empty net goal in the final minute, as Jagger Dirk played a long range pass up to Dufour and Dundee’s top scorer easily slid the puck into the vacant goal from just inside the blue line.

That win has lifted the Tayside club up into eighth position and they now occupy a playoff spot, as Glasgow Clan were defeated 7-3 on the road by Coventry Blaze.

Dundee are now a point ahead of the Clan with a game in hand and only three points behind the Storm and also they have played two games less than Manchester.

Although, the Stars did lose another player to injury tonight as defenseman, Reilly O’Connor went down in the second period with a lower body injury but there was no obvious reason why he was left hurting.

The Canadian blueliner did not return to the game and may miss tomorrow’s match in Cardiff.