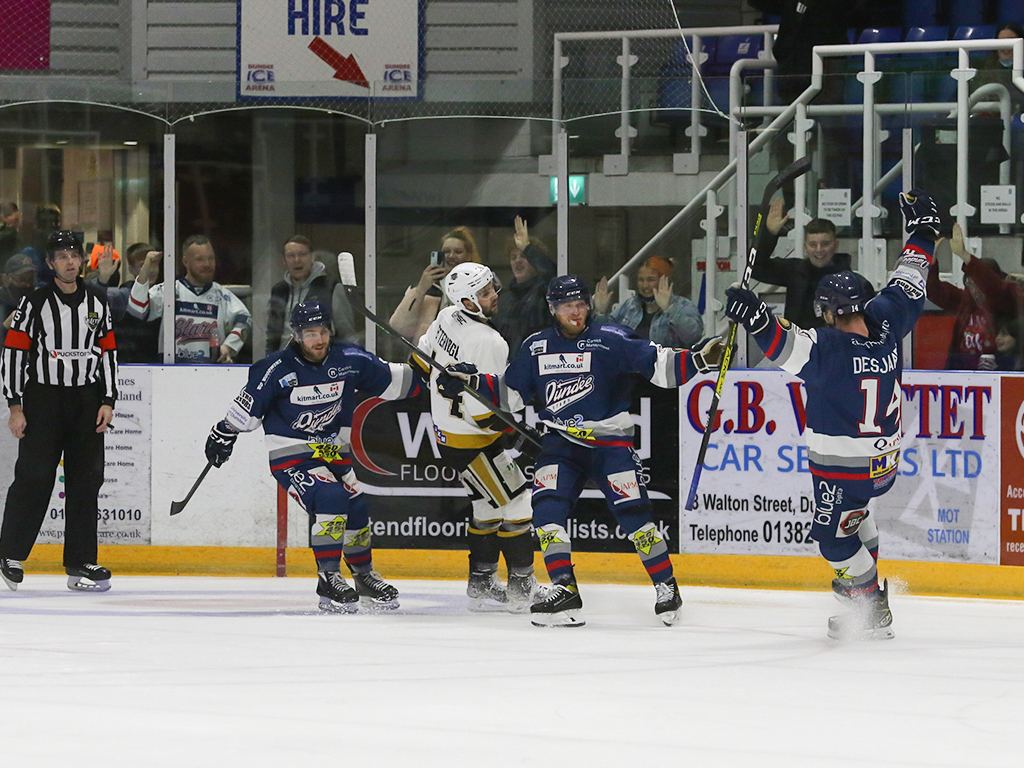 The Kitmart Dundee Stars made it three wins on the bounce with a dominant 4-1 victory over Nottingham Panthers on Saturday night at the DIA.

Before puck drop, the Stars regained forward, Spencer Dorowicz to the line-up but lost Dillon Lawrence to upper body injury, however that did not stop Dundee from put the Panthers straight under pressure.

The home side dominated play in the opening minutes and both teams survived early powerplay chances for their opponents, until  Nottingham’s Matthew Lane was boxed for slashing after 12 minutes. allowing the Stars to capitalise and take the lead.

Dundee pinned their visitors in their own end and were moving the puck around the goal, eventually after a few quick passes along the top of the zone, defenseman Michael Poirier set up winger, Philippe Sanche to blast a first time shot straight past Kevin Carr in the Panthers goal.

Tim Wallace’s men would hit fall into more penalty trouble during the first period but managed to keep the deficit to just one-goal by the end of the period.

The English club then came out for the second and levelled the score with a goal in the 24th minute, through Lane.

Panthers defenseman, J.C. Brassard saw his long range effort denied by netminder, Adam Morrison, before the rebound fell right in front of the waiting Lane, who had a clear path to tap in the loose puck.

With the game back on level terms, the Stars would turn a mistake into a goal and regain their lead on 32 minutes.

Swedish forward, Sebastian Bengtsson had been serving a two minute penalty for delay of game, but once he was released from the sin bin, he snuck in behind the Nottingham defence.

Gabriel Desjardins then noticed his teammate in the advanced position and sent a quick pass through to the Swede, releasing him on a breakaway.

Bengtsson then calmly and coolly faked out Carr and pulled him to the left of his goal before turning sharply to the right and sliding the puck into the gaping goal.

Then just a few minutes later, Omar Pacha would see his team open up a 3-1 lead as they cashed in on their powerplay again.

The Panthers had lost one of their skaters for two minutes after goalie, Carr was penalised for roughing after a bump with Dundee’s Connor Sills, who had fallen into the Nottingham shot-stopper.

The Stars third goal was scored by Spencer Dorowicz in the 36th minute and it came from his quick reactions to poke home a loose puck that was behind Carr, following a partially-saved shot from Sanche.

The Tayside team returned to the ice for the third period with their two-goal advantage still intact and for the next 15 minutes continued to shutdown and frustrate the Panthers.

By the end of the night, Stars goalie, Morrison had 34 saves to his name and he continually produced some big saves to keep his team ahead.

Dundee wrapped up the game and secured their two points with a fourth goal in the 55th minute, which was also Bengtsson second of the night.

Sills had pressed the Panthers defenders in behind their own goal, forcing a mistake that allowed him to win possession back and from behind the net, he sent a pass out in front for the waiting Bengtsson to strike past Carr.

The final buzzer sounded to make it three straight wins for the Stars and with a refreshed line-up following their injury crisis, they look set to challenge for a fourth consecutive victory in Sheffield on Sunday.