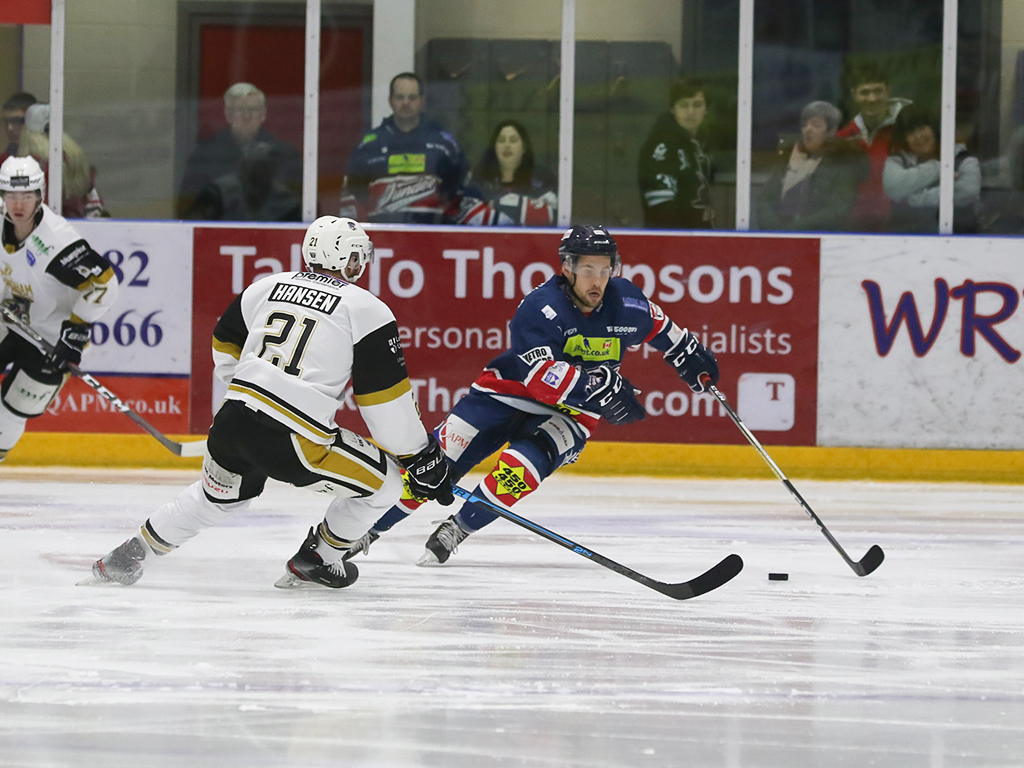 The Kitmart Dundee Stars were out to avenge their 6-1 loss in Nottingham just 24 hours before and they got off to a good start as new signing, Alex Schoenborn made a positive impact just minutes into his home debut.

The American caused Panther’s keeper Kevin Carr some trouble with a shot that went wide and bounced back towards the net, forcing Carr to be alert to make the save in the first minute.

The Stars then had another big chance as Colton Kroeker carried the puck past the Nottingham goal but Carr poked the danger away and as the English side went down the ice, a big hit was laid by Craig Gans on Oliver Betteridge after three minutes.

Ryan Horvat took exception to the hit on his teammate and after the whistle came to stop the play, he and Gans dropped the gloves.

The pair struggled to get the blows going and after Gans finally made contact with a few of his punches, he lost his balance and was on the back foot, allowing Horvat to strike him in the face and send him down to the ice.

It was then the turn of Dundee keeper, Alex Leclerc to make his first big save of the night as Dylan Malmquist had to be denied from close range as the Panthers passed their way through the Stars defence,

The scoring was opened in the seventh minute as Nottingham’s Sam Here sent his shot flying into the top right corner from out-wide on the left-wing.

The Stars lost now confidence from the goal and the end-to-end action continued, Dundee’s Drydn Dow and Panthers’ Jon Rheault both had scoring opportunities at either end after 13 minutes.

Then the first powerplay of the night went the way of Tim Wallace’s Panthers as Matt Carter was penalised for high-sticking in the 18th minute.

Although, the Stars penalty kill were strong again and Kevin Dufour managed to chew some time off the clock as he broke out of his own end with possession.

He held the puck up well in the Nottingham end and even created a few scoring chances, as he killed about 20 seconds off the penalty clock.

The visitors then also found themselves a man down as Brett Bulmer made a late cross-check on Dundee’s Anthony Beuaregard after a whistle and that brought the attention of Matt Marquardt and Shawn Boutin as they came to the aid of their teammate who was already having a go at Bulmer.

The Panthers forward ended up in the sin bin with a two minute roughing charge and that gave the two teams four skaters for a short period of time before Dundee would get a powerplay that spanned the period, if they could not score before time expired in the first period.

The home team got back to full strength and launched a few attacks on the Nottingham goal but they could not beat Carr before the buzzer brought an end to the opening session.

The Tayside team continued their offensive play as the restarted the match with a powerplay and they would find the net inside the opening minute of the second period.

However, Bulmer was just released from the box as Dow took possession and fired his shot into the top left corner from the middle of the slot.

Although, the game was not level for long as Betteridge restored the Nottinghamshire club’s lead, he got away down the left-wing.

He was up against a Dundee defenseman but Betteridge still got his effort away and Leclerc just could not hold onto the shot and it fell underneath him before rolling across the line in the 24th minute.

Nottingham’s Guillaume Lepine was the next player to be sent to the box as he was penalised for boarding Colton Kroeker on 25 minutes and Dundee then had a five-on-three powerplay as seven seconds later BEtteridge sent the puck out of play from his own end.

Wallace’s penalty killing unit did their job before goalscorer, Herr struck the bar in the 29th minute.

The Stars then had another two man advantage as their opponents were called for too-many men on the ice and Lepine returned to sin bin for roughing Dundee’s Alex Schoenborn but again the Panthers killed.

After a heavy period of Panthers pressure they were then given a powerplay as Stars defender,Brett Stovin boarded his opponent and that man advantage allowed Bulmer to convert a third goal for the visitors.

Georgs Golovkovs passed the puck across the ice to Bumer, who then blasted it first time and it beat Leclerc on his left post.

Lepine was in more penalty trouble as he took down Schoenborn away from the play but no call came from referees Allan Ward and Toby Craig.

Lepine had asked Schoenborn to fight with him but the Stars forward declined and the play continued, however  Gans came over for a few words with the Nottingham player, who then dropped his gloves but Gans was not interested in taking another five-minute penalty.

In the end, both players received roughing minors but Lepine was given two and that left the home team with another powerplay chance and it would again stretch into the third period as they failed to get one of their many efforts past Carr.

Omar Pacha’s side could not score another early goal as the powerplay ended with them still 3-1 down but it could have been a larger gap if the Panthers had not hit the post.

Dundee pushed very hard for the next goal to set up tense finish but Carr and his defence stood firm.

Both teams took late penalties and Dundee went without conceding on Kevin Dufour’s minor but Nottingham did not fair so well with Betteridge in the box.

The Stars finally beat Carr again as Marquardt and Carter worked the puck down low before Carter sent a pass out in front of the goal and it came through some bodies before finding Beauregard, who flicked a backhanded shot into the left side of the net to make it 3-2 with just under four minutes left on the clock.

Leclerc was pulled with a minute left and the Stars coach used his timeout with 54 seconds to go but there would be no further scoring, despite Malmquist hitting the post of the empty net in the final seconds.

The Stars will have to wait until Boxing Day for their next chance to end this bad run as they welcome rivals, Fife Flyers to the DIA.