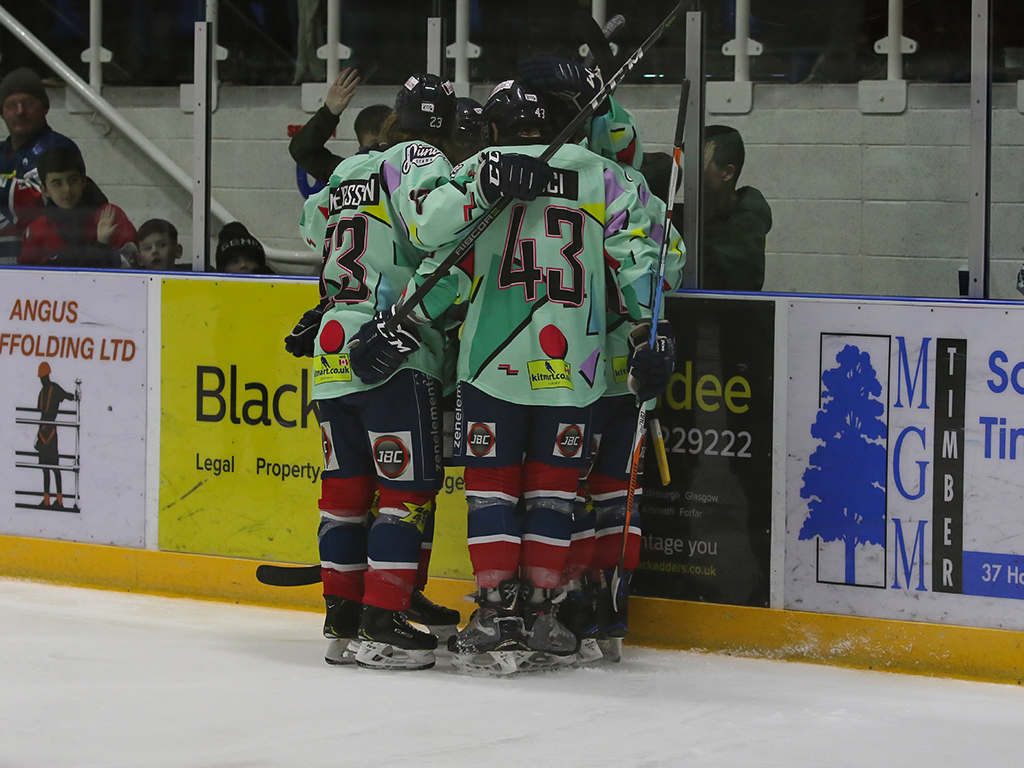 Dundee Stars went back and forth with Nottingham Panthers before grabbing a late goal to claim two huge points on a night that was filled with injury troubles for the Tayside team.

Dundee were almost at full-strength with on-loan Panther, Jordan Kelsall being the only scratch on their roster, as he is still away on international duty.

Meanwhile, Nottingham did not ice Patrick Munson or injured forwards Guillaume Lepine and Robert Farmer and Joseph Hazeldine was also unavailable whilst away with GB Under 20’s.

Nottingham’s Tommy Hughes was the first player to come close to opening the scoring in the second minute, as his first-time shot smashed off the Dundee post.

Although, Fabrizio Ricci then had a chance to put the home team in front but despite being unchallenged, he could not beat Michael Garnett in the Panthers net.

In the seventh minute, Omar Pacha’s Stars received the first powerplay of the game as Justin Kovacs wiped out Ricci behind the play but Dundee could not take the lead while on the man advantage.

However, they crept even closer as Mike Sullivan’s shot was saved before the rebound slipped out to the left side of Garnett’s goal but Ricci could only flick the puck into the side netting.

The visitors finally started the scoring in the 12th minute as Alexander Guptill nut-megged a Stars defender before slotting his shot past Pontus Sjögren and into the bottom right corner.

A few moments later, Shawn Boutin bailed out Dundee as a pass went astray and allowed their opposition to come in on an odd-man rush but the Dundee defenceman quickly regained possession following a stop by the Stars goalie.

However, the Tayside team finally responded after 14 minutes as Drydn Dow’s shot was redirected past the Nottingham goalie by Lukas Lundvald.

Although, 33 seconds later, Ollie Betteridge restored the Panthers’ lead, as he exchanged passes with Alexandre Bolduc before missing on his first and best chance but the Englishman then tucked home the rebound.

After the restart, Dundee lost one skater as François Bouchard left the ice for some medical treatment but just minutes later, a hard check into the boards sent Matt Bissonnette into the locker room as well with an upper body injury.

Despite being two forwards down, some luck came to Stars as Mark Hurtubise received a two-minute roughing penalty that would carry over into the second period.

It quickly became a two-man advantage for the home team as an elbowing foul was called against Jaynen Rissling with just 20 seconds left in the session.

Garnett held onto every shot until the buzzer sounded to end the first stanza and that meant his side went in to the first break with a one-goal lead.

To start the next period, Dundee wasted a valuable five-on-three powerplay as both penalties expired, leaving the home side still trailing.

Then minutes later, rookie forward Craig Garrigan laid a perfectly clean hit on Nottingham’s Stephen Lee along the boards and that gave the Stars faithful something to cheer about in what had been a damp start to the middle session.

Garrigan quickly became Dundee’s hero as he controlled a loose puck in the neutral zone before firing a spectacular shot over the right shoulder of Garnett on the halfway mark to tie the score at 2-2.

Again, the Nottinghamshire club responded swiftly as Guptill bagged his brace, when he rotated on the spot and flung a backhanded shot into the roof of the Dundee net, just 34 seconds after Garrigan’s equaliser.

Soon after netting his first pro goal, Garrigan netted his second as the Dundee-born forward lifted the rebound of Dow’s shot over the Panthers keeper to make it a tie game once more.

Rick Strachan’s side would go into the second intermission shorthanded again as Joshua Tetlow was called for hooking Charles Corcoran inside the final two minutes of period two.

Pacha’s powerplay continued to falter as they let another chance slip at the beginning of the third period but the Stars had asserted some early dominance in the final stanza and were creating the better scoring opportunities.

Boutin fired a slapshot that was beaten away by Garnett but the rebound hung in mid-air and then fell for Matt Marquardt but the winger could only hit the side netting with his attempted shot.

The injury crisis worsened for Pacha’s side as captain, Johan Andersson took a hit to the head from Dylan Olsen but no punishment came from referees Toby Craig and Pavel Halas, as Dundee lost their third attacker of the game.

Once play resumed, there was a scramble in front of the Stars net and the visitors claimed a goal but the officials quickly disallowed it before consolidating the goal line technology and the original decision was upheld and the score remained tied at 3-3.

With just over seven minutes remaining Brian Hart flung Dundee into the lead for the first time as his shot went high past Garnett and when the game entered the final minutes, Strachan went all out for the win by removing his goaltender and using his timeout.

The Stars held onto to claim a valuable two points in their playoff push and finished the game with a team half the size of Nottingham’s.

Omar Pacha was delighted with the “great character win” as his players showed great determination and grit to push on and win the game with only two forward lines and he also described the team’s new injury situation as “not good”.

The Stars have a day off before their next game as Guildford Flames come to Tayside but Dundee will be keen to claim their first win over the Surrey side.