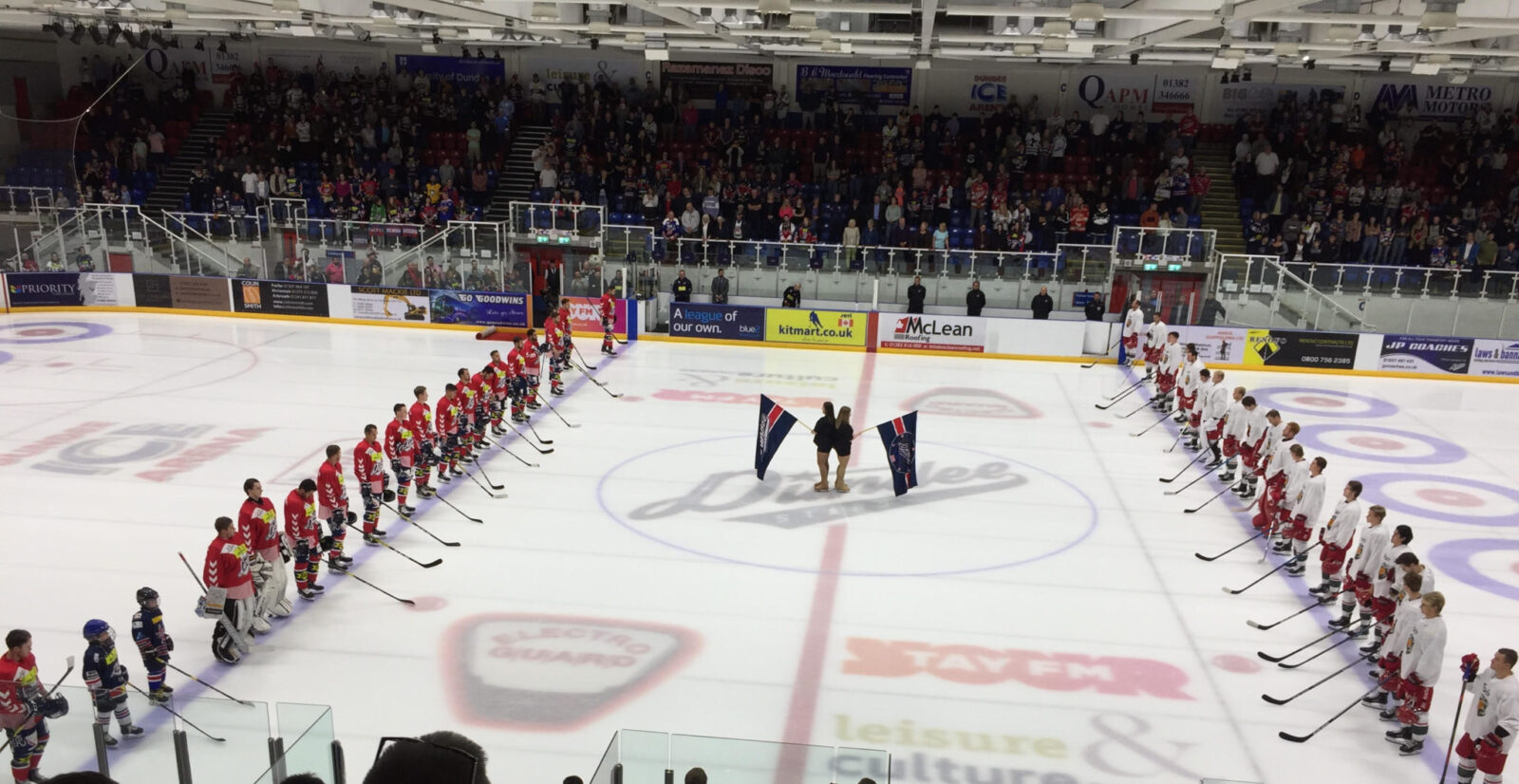 The Kitmart Dundee Stars started their new season with a 4-2 win over Odense Bulldogs in their first of two preseason games.

Elgin Pearce did not ice for the Stars but landed in the UK in just enough time to make an appearance in front of the fans during the first intermission.

The Stars first powerplay of the 2019/20 season came when Christopher Kamph was penalised for a holding foul after five minutes.

It was not the start Dundee wanted as they could not get their powerplay clicking from the off.

A few minutes later Kevin Dufour went through on goal but despite being clear on a breakaway, the Canadian was denied by Evan Cowley.

Dundee put a lot of pressure on Odense but the Bulldogs still found a way to create chances for themselves.

Even though this was a preseason friendly, the physical play was present from the start with Matt Marquardt landing two big hits on two unsuspecting Bulldogs, resulting in loud cheers from the Stars faithful.

In the final minute of the first period, Dufour was presented with another chance to open the Stars account for the new season.

The Odense netminder was down on his back and Dufour skated around him before sending a shot across the face of goal.

Anthony Beauregard had to leave the ice for an equipment repair in the opening minutes of the second period and Dundee continued to create dangerous chances.

Colton Kroeker picked out Dundonian, Jordan Cownie with a intelligent saucer pass before Cownie hit a powerful slapshot from the top of the slot but Cowley manged to turn it up and out of play with the blade of his stick.

The Stars first penalty of the new campaign was called on Craig Garrigan for boarding but this was when the Danes set to work.

Vojtech Komarek gave the visitors the lead with a powerplay goal in the 28th minute.

Christopher Kamph had taken the puck towards the Stars net but goalkeeper, Alex Leclerc managed to jam its path to the net with his leg pads.

However, the puck popped out from the scramble of players in front of the Stars net and Komarek collected it and walked it into a wide-open net.

The home side almost drew level in minutes as Cownie had two chances to score.

His first shot rang off the right post before his second effort went across goal but on both occasions, he had Cowley beat.

Dundee were in penalty trouble again as Kris Inglis was penalised for tripping but then he and Yannick Vedel began to tussle.

Nothing was able to happen before the referees stepped in but that left the Stars on the penalty kill.

It quickly became a five-on-three kill when Jagger Dirk was sent to box for delay of game as his clearance went into the stands.

The bulldogs were unable to capitalise in the short time remaining in the second stanza.

Komarek took a high hit at the start of the final period whilst skating through the Stars goal crease and he stayed down on the ice before heading off for some medical treatment.

Dundee finally got on the scoresheet when Dufour sent his shot over Cowley’s shoulder and into the roof of net in the 43rd minute.

After another good penalty kill, Kroeker made another intelligent pass to beat a chasing defender and reach Brett Stovin at the backdoor.

The Canadian managed to push the puck goalward and into the bottom left corner on the 46-minute mark.

The Stars lead came under threat straight away as Henry Hardarson forced Leclerc to make a stop with his helmet.

Dangerous was the word to describe the Danes and eventually there lethality killed Dundee’s lead.

Asger Petersen’s shot from a wide-angle hits Leclerc’s blocker and went skyward before dropping in the back of the Stars goal in the 49th minute.

Things heated up as a continuing altercation between Anthony Beauregard and one of the Bulldogs spilled over in front of the team benches, causing multiple players on the ice to get involved.

The penalties piled up afterwards with two Stars players and two Bulldogs sinbinned for two minutes each on roughing charges.

In the last five minutes, Dundee stepped-up their attack and a smart play gave them the lead inside 55 minutes.

Matt Marquardt put a pass on the tape of Stovin’s stick and he sent a shot off the crossbar and down into the net, to restore their lead.

In the final minute, Kroeker wrapped up the first win for his side and made it 4-2 by turning in a Cownie pass at the backdoor.

Both sides are already raring to get back out there as they face-off again at 5pm on Sunday. Buy your tickets HERE.

A pleased Omar Pacha said this after the match: “We finished well, we had a lot of good chances in the first period good but both teams looked too afraid of making mistakes.

“However, we also played a great defensive period and Alex was there for us when we needed him.

“The third period was our best period and there aren’t many areas where we need to get better at.

“It has been a hard week of practice but there is nothing I could say about their work ethic, I asked them to outwork the other team and they did.”

Pacha also praised the Stars fans and hopes they will create another great atmosphere in the second match.

“It is great to see the growth of the club and hopefully they are just as loud tomorrow night”, added Pacha.