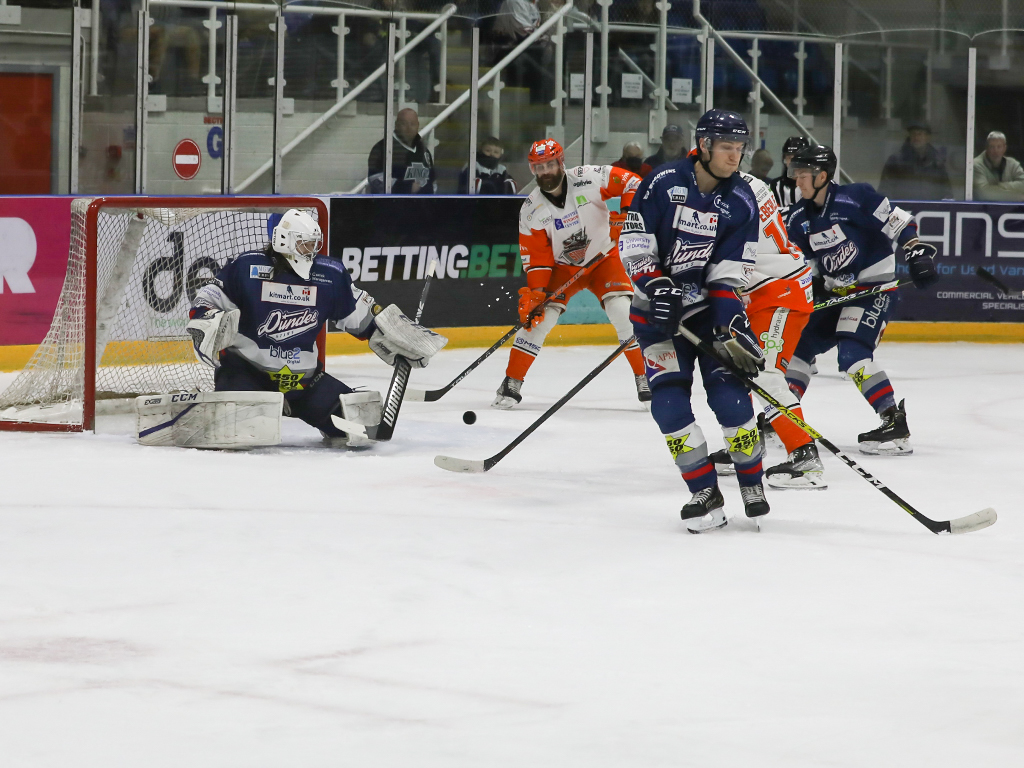 The Kitmart Dundee Stars secured two more vital points to make it a four-point weekend against the former league leaders and back-to-back wins for Brython Preece in his full debut weekend.

The Stars saw things fall their way in the first period but they just did not see the puck fall into the net.

After a fast-paced start that saw both teams rapidly move the puck from end-to-end, the Stars soon gained the upper hand in momentum as they went on the powerplay.

Despite, Antonin Boruta’s two minute penalty for tripping, Dundee failed to make a quick start like they had in Sheffield.

Both Brython Preece in the Stars net and Rok Stojanovic in the Sheffield net made solid starts to the night and the pair produced some vital saves to keep the game scoreless.

After the first period, the game was still in a stalemate, even after the home side had two more chances on the powerplay but the Steelers defences stood firm to keep the score level.

In the second period, Omar Pacha’s men then took their turn to come under heavy pressure as they spent some time in the sin bin.

Although, even the Elite League’s most dangerous offence failed to capitalise on there chances, which included a long three minute man advantage after Dundee’s Kyle Haas was given a five minute major penalty for boarding Martin Latal.

Just as the game looked set to be heading into the final period of regulation without a goal, a bizarre moment unfolded in front of all those watching at Dundee Ice Arena.

A powerful shot from the Stars’ Spencer Dorowicz looked to have burst through the net and escaped out the back and as the Stars players gathered to celebrate, Sheffield quickly burst up the other end and caught Preece off-guard as he celebrated his team’s goal.

However, after a review of the play, the video showed referees Toby Craig and Cameron Fox that the puck had caught in the outside apron of the goal and had not gone through the net.

That then meant the Steelers took the lead through Brandon Whistle’s quick-thinking on 34 minutes.

A deflated Dundee side then did their best to get back on level terms before the break but were unable to find a way past Stojanovic before the clock expired.

In the third session, the Stars were quick to show their desire to find that equaliser and eventually they were rewarded for their hard work.

In the 50th minute and whilst on a powerplay, Dillon Lawrence was perfectly positioned to flick home the rebound from Connor Sills’ shot that had been saved by the Steelers netminder.

With the game tied once again, the atmosphere inside the DIA lifted and became electric for the final 10 minutes of regulation as both teams pushed hard for a winner.

However, they could not be separated after 60 minutes and Aaron Fox’s side would fall victim to more penalty trouble in overtime.

After just more than a minute had been played in extra time, Sheffield lost Evan Mosey for two minutes on a holding call and just as they seemed to have survived the heavy pressure from Dundee, a lethal blow was dealt.

With only seconds left on the powerplay, new signing, Kalvis Ozols wound up and let rip on a first-time slapshot that blew past Stojanovic on 63 minutes, sealing a four-point weekend for the Stars.