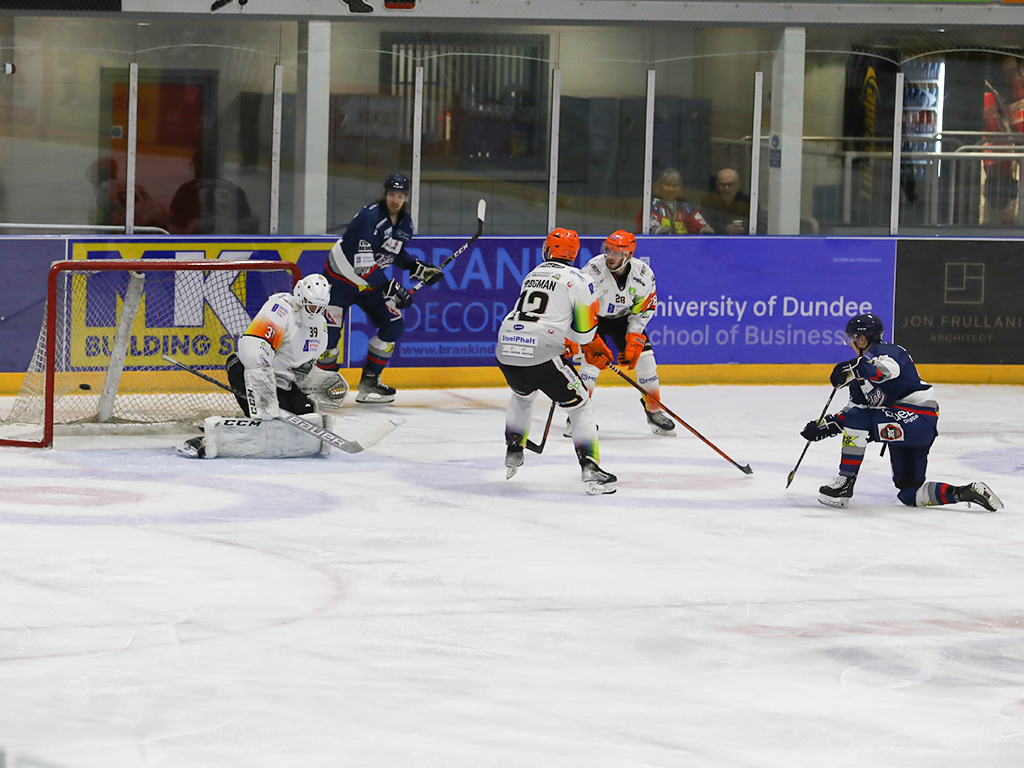 The Kitmart Dundee Stars were out to complete a four-point weekend as they tried to topple the league leaders, Sheffield Steelers at home on Sunday night.

Right before face-off, it was confirmed that Dundee would also be without blueliner, Michael Poirier as an upper-body injury took him out of action, forcing him to join Kris Inglis and Gabriel Desjardins on the sidelines, while Toms Rutkis moved back to play in defence.

In what was destined to be another tight and hard-fought contest between the two teams, neither side would give up anything early.

After a slow burning start, the first opportunity would eventually fall the way of the Stars after three minutes of play, as a long-stretch pass unleashed Connor Sills and Sebastian Bengtsson.

The pair were bearing down on the Sheffield goal and Bengtsson would test Rok Stojanovic with a wrist shot, but it was easily held by the Slovenian.

The Steelers goalie was quickly called into action again, just moments later as he had to react quickly to cover a loose puck, with Dundee’s Philippe Sanche rushing in to poke it home.

Although, the Stars would soon make their chances count and converted in the 11th minute through Sebastian Bengtsson, taking his point-streak to 12 in the last nine league games.

Another long pass sent Bengtsson and Alexandre Ranger through on goal with the latter, teeing up Bengtsson to fire the Stars ahead.

Omar Pacha’s men then continued to have the better of the chances and nearly saw their lead doubled straight away, as the same pair went through on goal again.

However, this time Ranger’s shot would bounce off the goalframe and that missed chance would be punished by the Steelers at the other end.

After circling the Stars net, Sheffield’s Daine Todd moved the puck out to the wing for Kevin Schulze, who then set up Robert Dowd to hit a first-time short past Adam Morrison, on 13 minutes.

The home side then hit some penalty trouble, as Stars defenseman, Kyle Haas reacted to Tanner Eberle colliding with his goaltender and the pair would both receive penalties, but the Stars ended up a man down for two minutes.

The first period ended with the two teams still tied and the Steelers still on the powerplay, but in the second session, the Yorkshire club would quickly cash-in on their leftover man advantage.

With the Stars outnumbered, the unmarked Marc-Olivier Vallerand had time and space to get away a clean strike that struck the underside of the crossbar, before dropping into the net.

Although, Dundee soon fought back and got themselves level, as Dundonian, Craig Garrigan blasted home from point blank range.

The winger was left open in front of the Steelers net and after Timi Lahtinen won possession for Dundee behind the goal, he quickly moved the puck out in front for Garrigan to send home on 25 minutes.

Despite a strong performance for Dundee, some poor discipline almost cost them as Morrison had to produce a game-changing save to keep the Steelers out.

Sheffield’s Justin Hodgman thought he was about to restore the English outfit’s lead as he reacted quickest to shoot a loose rebound back on target, only for the catcher of Morrison to appear at the last second and snatch the puck away from goal.

The two teams could still not be separated after 40 minutes and what would be a decisive third period required a big performance from both sets of players.

It took just over 10 minutes for the next goal to come and it proved to be the match winner, as Dundee capitalised on another chance to move 3-2 ahead.

Stars forward, Spencer Dorowicz carried the puck with pace into the Sheffield end and at the last second sent the puck between defenders and across the goal, where Charlie Combs arrived to direct it up and past Stojanovic on 51 minutes.

The pair then immediately combined again and the Stars thought they had the puck in the net, but the referees call of no-goal eventually stood after a lengthy video review of the play.

Following that blow, the Tayside team were not disheartened in any way and continued to stand firm against the league leaders, closing them out for the remaining minutes, to seal a four-point weekend.

In what was the Stars sixth home league game in a row, they secured their fourth victory and have a chance to make it five in seven as they welcome the Manchester Storm to Dundee next Saturday, before going on the road to face Nottingham Panthers on Sunday.