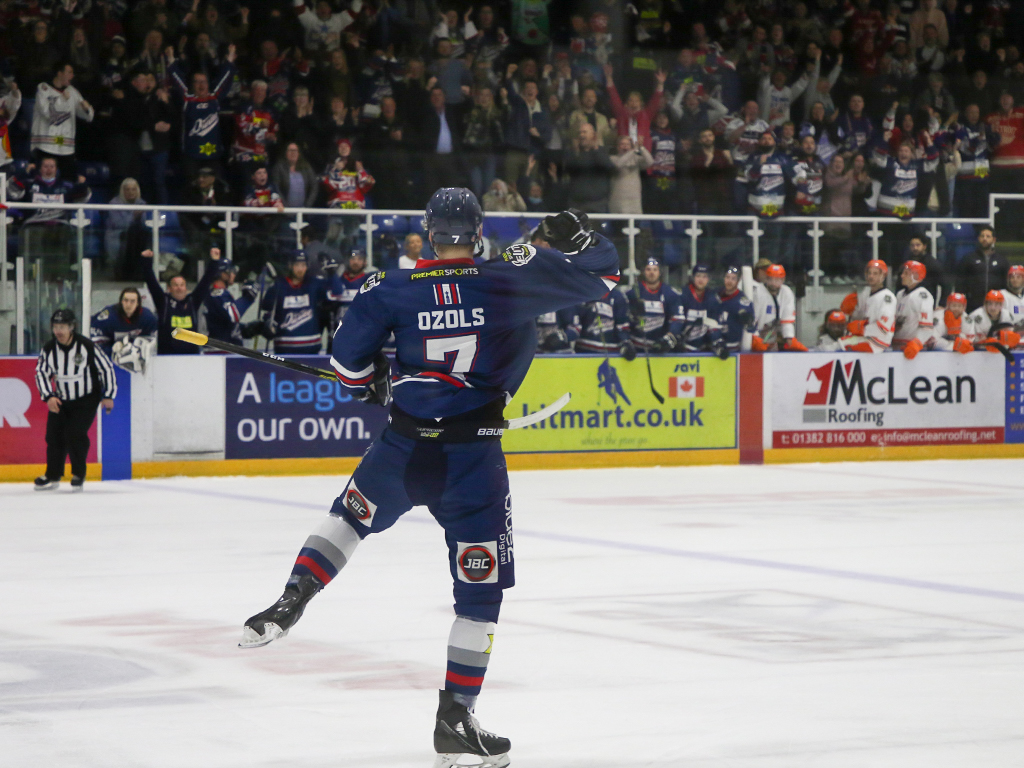 The Kitmart Dundee Stars battled back from 3-0 down to beat Sheffield Steelers 4-3 on the night and 5-3 on aggregate and send themselves onto the Playoff Finals Weekend in Nottingham.

The Stars were without three forward players for tonight’s game, as Spencer Dorowicz, Quinn O’Brien and Craig Garrigan were all absent through injury, but they were only one player short from a full roster, while the Steelers brought a complete line-up to Dundee.

The opening minutes saw a scrappy battle for possession with both side’s eventually getting shots on target that tested the reactions of both keepers, however their would be no quick starts to the scoring.

Although, the nearly sold-out Dundee Ice Arena soon erupted into dismay as Stars winger, Philippe Sanche was dumped into the boards by Sheffield defender, Sam Jones.

The Canadian failed to get back up to his feet and required medical attention, before being helped off the ice and whilst he was being treated, Dundee enforcer, Kyle Haas rushed onto the scene to get a hold of Jones, but referees stepped in swiftly before anything broke out. 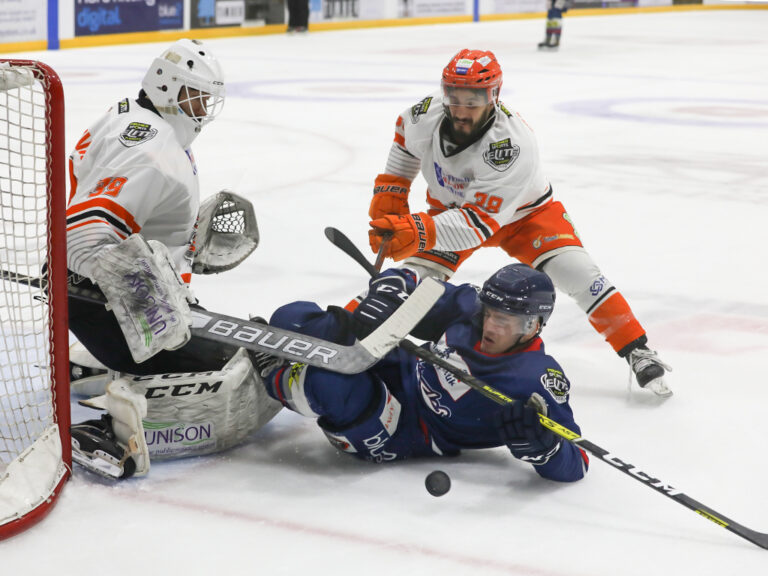 The large Stars crowd was left furious after the only penalty called on the play was against Haas for unsportsmanlike conduct and that put the English side on the powerplay, which Marc-Olivier Vallerand would convert into the series tying goal.

The Canadian forward sat himself out on the right flank and when Robert Dowd’s pass came across, Vallerand hit it first time past the diving Adam Morrison.

Despite the controversy, the Dundee players were not deflated and kept coming back at the Steelers, with Caly Robertson finding himself in possession and bearing down on goal.

The young-Scot was being hooked by the stick of Tomasso Traversa but still managed to get a shot on target, before drawing the penalty.

Omar Pacha’s men were not able to answer back on their on own powerplay and the visitors soon added a second goal of the night to put them ahead on aggregate score.

It was a well-worked moved by Sheffield that saw them keep possession, despite a lot of challenges from Dundee players and the puck eventually came across to Dowd, who again found Vallerand, this time at the back post for a tap in on 14 minutes.

Sanche soon returned to the ice for the final five minutes of first period action, but Dundee were still two goals down on the night, by the end of the first period.

The second period begun with Sheffield adding to their lead, as Martin Latal deked his way past Morrison to make it 3-0, after only 59 seconds since restart. 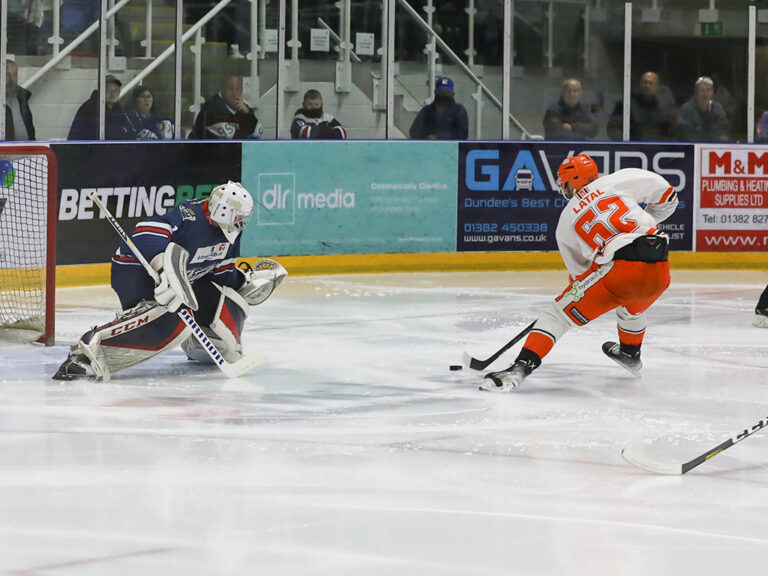 The Stars still would not give up though and continued to battle Sheffield for every loose puck and every inch of the ice.

Eventually they got the break they needed, as a roughing penalty against Sheffield’s David Philipps put Sheffield down to four skaters and a high-sticking double minor against John Armstrong then gave Dundee a five-on-three powerplay.

Dundee’s Kalvis Ozols then utilised his trade-mark slapshot to get the Tayside team on the board, as he blasted Sebastian Bengtsson’s pass home from just inside the blueline.

The second period ended with Sheffield still two-goals ahead and one in front on aggregate but the Stars had given themselves a chance to turn it around.

Omar Pacha’s men were then shutdown during the rest of their over-lapping powerplay to begin the third period and it came all the way down to the final eight minutes.

That’s when Bengtsson scored the goal that put Dundee back on level terms, as he was left unmarked on the right wing, where Charlie Combs picked him out from across the ice and the Swede smacked home a rising shot into the top left corner. 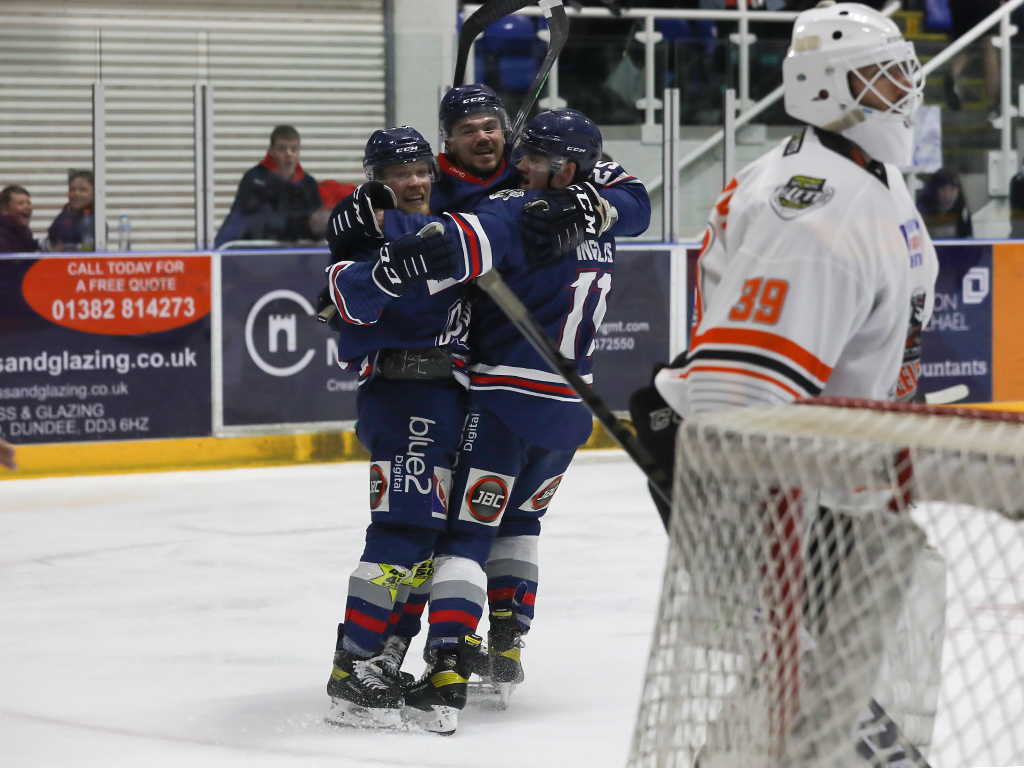 A long-delay followed the goal as the officials needed some equipment repairs but when the game restarted, the Dundee Ice Arena was still bouncing.

The Stars then got the perfect opportunity to get their noses in front as a penalty against Jones for slashing with 90 seconds left in regulation, put Dundee back on the powerplay.

After Aaron Fox decided to use his timeout, the Scots then knuckled down to make sure it would count and with only 65 seconds left to play, Dundee got the go-ahead-goal.

They worked the puck around the zone, moving it behind the net, where Combs picked out Bengtsson again on the right flank and he beat Rok Stojanovic, with another bullet into the top right corner.

Sheffield then made the late gamble to pull Stojanovic in exchange for the extra attacker but that only allowed Dillon Lawrence to put Dundee two-goals ahead and make it 4-3 on the night, as he lobbed the puck into an empty net, from his own end of the ice.

The final buzzer finally kick-started the full celebrations for the Stars and their fans and other results across the country mean that Dundee will face Belfast Giants in the Semi-Finals of the Playoff Finals Weekend in Nottingham, next Saturday. 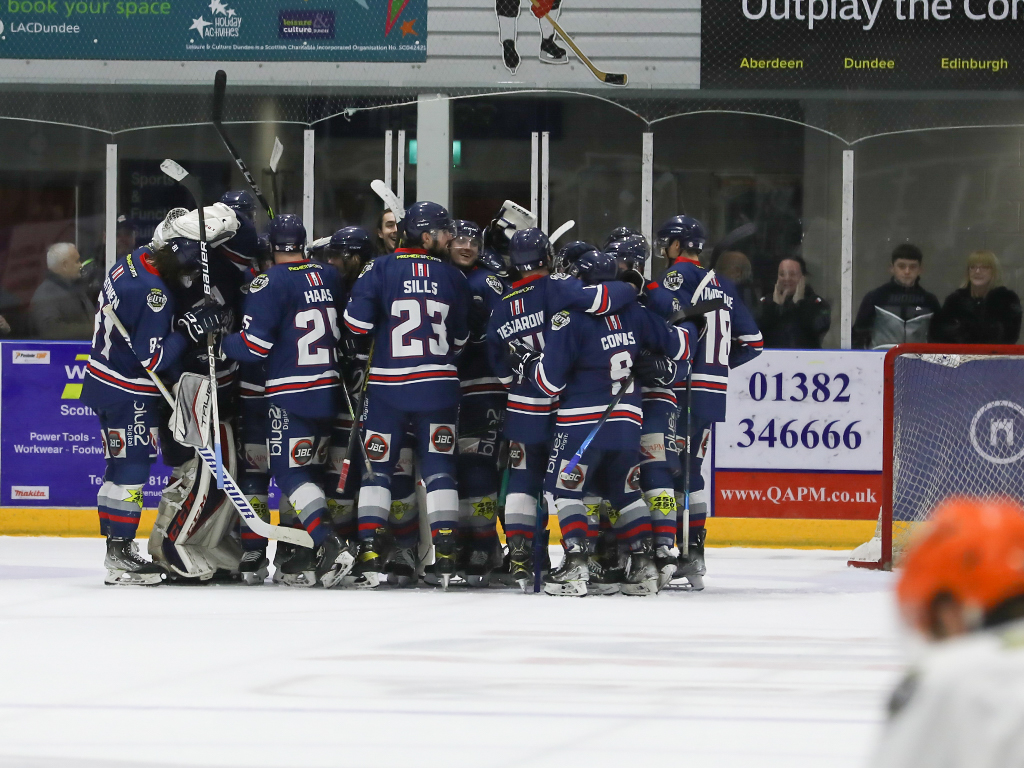