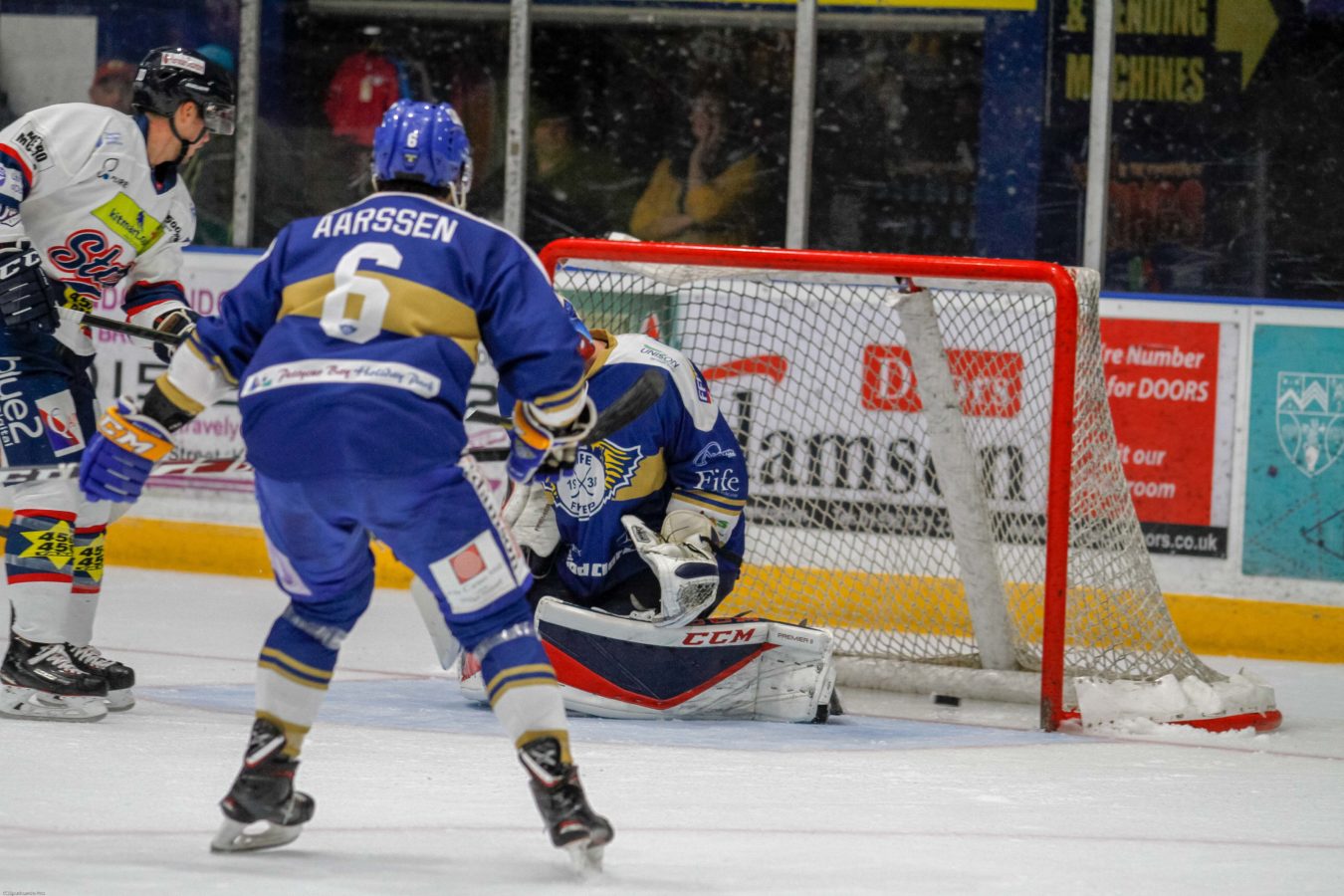 The Kitmart Dundee Stars rounded off their Challenge Cup group stage action with another away victory and stole back the bragging rights from their biggest rivals.

The Stars were in Kirkcaldy to play their final Group A match and it was against their oldest enemy, Fife Flyers.

The game had a slow start as both teams built up their attacks but after eight minutes of play, the first penalty was called and it came against Fife’s Danick Gauthier for a tripping foul.

The Stars wasted no time in taking advantage of having the extra skater as the Stars captain, Matt Marquardt turned a Jagger Dirk shot through the legs of the Flyers goalie, Adam Morrison.

With Dundee scoring just 12 seconds into their powerplay, the goals continued to come thick and fast as the home side pulled one back 21 seconds after the opening goal.

Carlo Finucci finished off a quick passing move in the ninth minute, as Kyle Just sent the puck to Paul Crowder, who straight away sent it out to Finucci.

The Flyers forward was in a wide position and had plenty of net to shoot at as Dundee netminder, Alex Leclerc scrambled from his right post to his left.

Another penalty followed the Flyers equaliser and it was again against the home team as defenseman, Scott Aarsen was called for hooking Dundee’s Kevin Dufour.

Although, he did not have to serve his full two minutes as Dufour made the Flyers pay.

The Stars in-form forward was played through on goal and calmly slotted the puck between the legs of Morrison in the 11th minute.

However, the Taysiders lead would be short-lived again as Mike Cazzola managed to flick the puck high into the roof of the Stars net from a narrow angle in the 12th minute.

Once again, Omar Pacha’s men took the lead as Dufour netted his second of the evening and third of the weekend after 14 minutes.

Once more, he was played in behind the Flyers defence and this time he tucked the puck over the left pad of Morrison as he whizzed past the Flyers shot stopper.

Dundee held onto the 3-2 lead until the first break and the second period seen both teams have plenty of powerplay chances to change the score line.

However, both team’s penalty killing units were looking strong but when the Flyers lost Aarssen and Finucci to two-minute minors, the Stars took full control and full advantage of the situation.

Drydn Dow drilled Dundee’s fourth goal home with a fast and powerful slapshot that beat a moving Morrison in the 34th minute.

Todd Dutiaume would have been frustrated to watch his side waste a long powerplay opportunity as Dundee lost defender, Shawn Boutin for four minutes after his stick accidently caught Paul Crowder in the face.

Anthony Beauregard joined Boutin in the Stars penalty box after being called for a hooking infraction and with the two-man advantage, the Flyers looked dangerous.

There was one incident that caused the match officials to review a potential Fife goal but Leclerc and his defence had done well to keep the puck away from the line and it was not given.

Dundee led 4-2 going into the final period but after killing off all their remaining penalties, they did concede a very unlucky goal.

Fife’s James Isaacs had sent the puck deep into the Dundee end but it took a weird bounce off of the plexi glass and landed out in front of the Stars goal.

The Dundee goalkeeper had skated behind his net to intercept the puck but the odd deflection had left him out of place and the Stars net gaping for Tim Crowder in the 43rd minute.

There was only one major kick-off on the ice and it involved duo’s from both sides.

Dundee’s Dirk and Elgin Pearce became entangled with Fife’s Gauthier and Paul Crowder with long tussles between the pairs putting them each in the box for two minutes on roughing calls.

Though Stars did get a powerplay out of it all, as Crowder was deemed the instigator and was given another two minutes for slashing.

Shortly after being released from the box, Dirk left the game and headed for the Dundee dressing room after unluckily taking a puck to the face from close range.

The game came down to the final minutes and inside the final two, Dutiaume used his timeout and pulled Morrison in exchange for the extra attacker.

It was start and stop all the way to the buzzer but the Stars were clearing well and winning the important face-offs.

The final buzzer sounded to add to Dundee’s unmatchable points tally in Group A.

The Stars won all three of their away games in the Challenge Cup and will be the number one seeded team in the Quarter-Final draw due to their win percentage of 83 per cent.