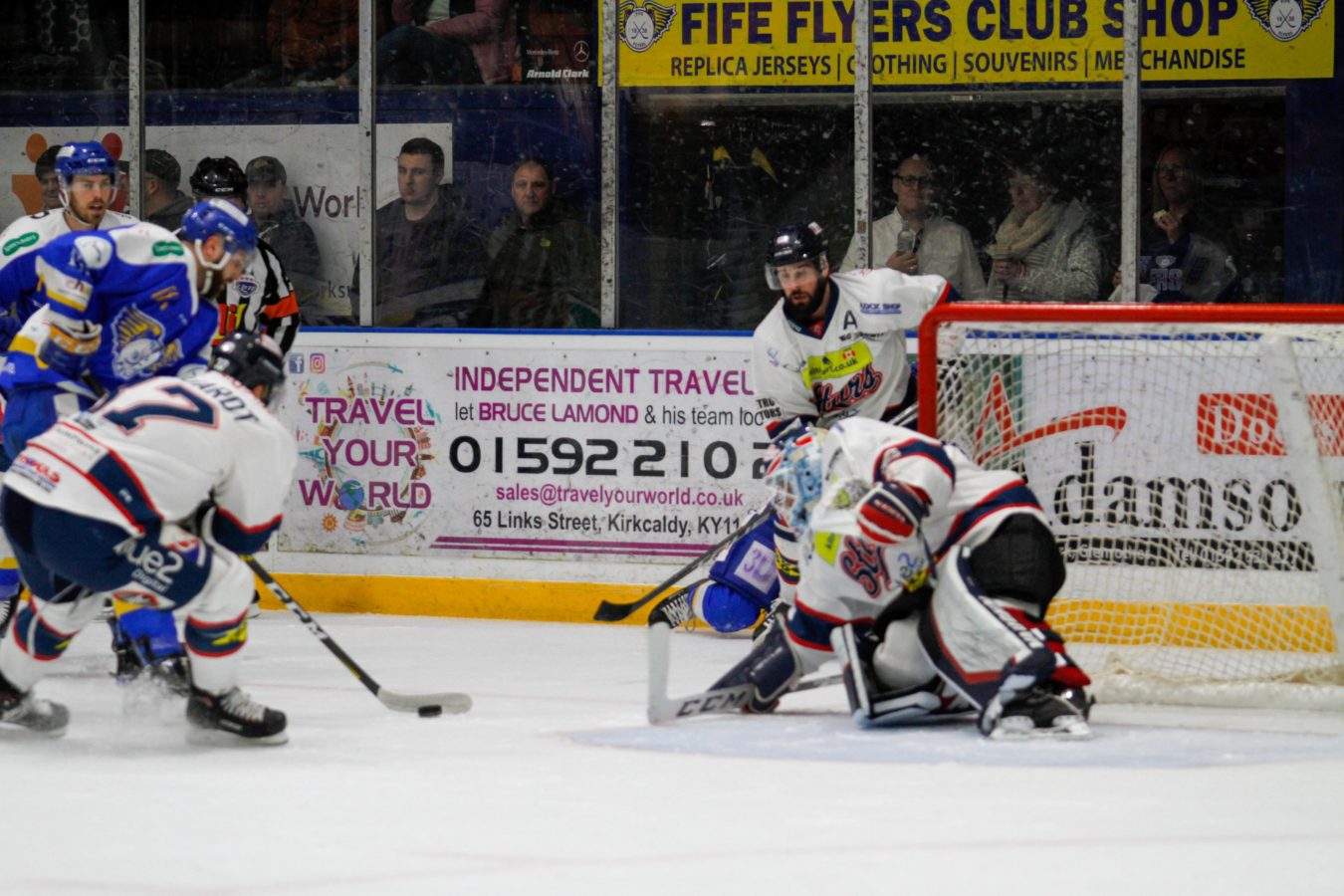 The Kitmart Dundee Stars were in Kirkcaldy on Saturday night and looking to claim their fourth straight victory at the Fife Ice Arena.

Dundee would still be down to players as Alex Schoenborn and Kris Inglis remained unavaialble because of injury and the Flyers were missing defenseman, Sam Jones due to suspension.

With the Stars going for a clean sweep of wins in Fife, they did not start how they wanted too and quickly found themselves in danger as the first chance of the match fell for the home side.

Just 40 seconds in, Chase Schaber was in behind the Dundee defence but he could not hit the target.

The Stars created the next best chance, as they broke down the ice three-on-two after Jordan Buesa’s shot was blocked but Fife goalkeeper, Adam Morrison denied Dundee twice in the third minute.

Dundee then dominated for a period but Fife finally escaped from the pressure just before Schaber drew the first penalty of the evening after he tripped up one of the visiting players in the 10th minute.

Omar Pacha’s men could not open the scoring on the powerplay but the Flyers came close to when Danick Gauthier thought he had scored, only to be denied by Dundee netminder, Alex Leclerc.

However, a second chance came to Paul Crowder but he failed to hit an open goal in the 13th minute.

Although, the first goal came minutes later, as Kyle Just netted from close range on 15 minutes to give Fife the lead.

Despite getting the first goal, the Flyers completely fell apart and their loss of shape allowed, Egils Kalns to skate onto a loose puck and quickly dispatch it past Morrison, less than two minutes later to tie the score.

The first period ended with the teams still tied but in the second, the action continued to go back and forth until a short period of pressure from Dundee inside the 3oth minute culminated with Kevin Dufour missing the target on a big chance for the visitors.

The Stars first penalty came on 32 minutes, as Reilly O’Connor was punished for a tripping foul and after just 21 seconds on the powerplay, Schaber put the home team back in front.

Fife pressed well to keep the puck pressed in the visitors end and when the pass came out to him from James Livingston, Schaber drilled his shot into the top right corner.

Dundee restarted the match with another quick response in their minds and Jagger Dirk almost provided just that.

The Canadian defender saw his first shot from the left flank saved but after collecting his own rebound, he attempted to wrap a shot around the far post, only for Morrison to close the door at the last second.

The Stars captain was next to test the Fife defence as he drove hard towards the net and he also tried a wraparound attempt.

The shot was stopped by Morrison but ma rebound sprung out back into play, only for the chance to be killed by a premature whistle.

There were a few more chances for the Flyers but they could not increase their lead before the end of the middle period.#

However, they did hand their opponents a big powerplay chance as Gauthier boarded Dirk with 10 seconds on the clock, meaning the Stars would have a near full two minute advantage to start the final period.

Todd Dutiaume’s Flyers seen off the penalty before Kalns made a great play with his stick to takeaway a chance from Tim Crowder in front of the Dundee goal.

A few moments later, Fife forward, Mike Cazzola then misplaced his pass to Carlo Finnucci as another chance to increase their advantgae was wasted.

Then, with Dirk in the box for a high-sticking infraction, Just played in Paul Crowder but he could not slip the puck past Leclerc, after he closed the forward down swiftly.

There was then a shorthanded chance for Marquardt but Morrison came up with a key stop to protect his side’s lead.

Just was the next player in the sin bin for delay of game in the 54th minute but again Dundee failed to capitalise, however the same could not be said for Fife, as they made it 3-1 with a shorthanded goal.

A long pass down the ice from Paul Crowder found Schaber and he beat Leclerc to the puck before narrowly slipping it past the Stars keeper on 54 minutes.

Dundee put up a strong fight in the final minutes but all the rebounds were falling straight to Flyers’ sticks and after Leclerc was swapped for the extra attacker with two minutes to go, Fife finally wrapped up the victory.

After numerous long-range shots missed the empty net, Paul Crowder finally scored into the vacant goal with 12 seconds to play but he did have to flick it up over a diving Dundee defender.

Fife snapped their 14-match losing streak but the Stars are still just a point outside of a playoff spot and must win on Sunday at home to Guildford Flames to keep their chances of making the post-season high.