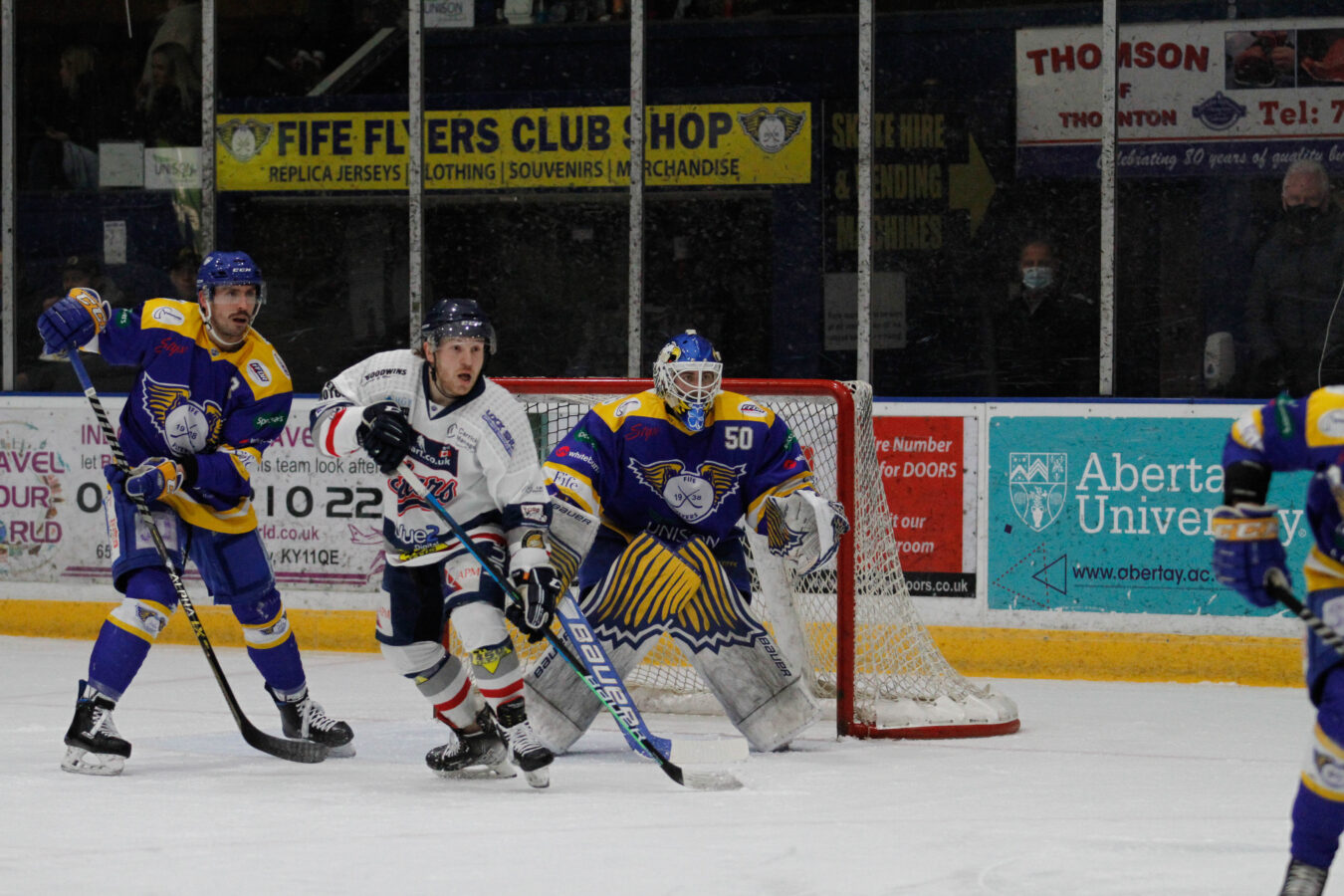 The Kitmart Dundee Stars were out to secure their place in the Elite League playoffs on Saturday night and all they required was an away win over their local rivals, Fife Flyers.

The Stars were still missing the injured trio of Adam Morrison, Craig Garrigan and Toms Rutkis but they did get the first chance of the game, as Charlie Combs put a shot on target to test Shane Owen quickly.

Although, the Flyers netminder denied the American and quickly scrambled to cover up the rebound.

Dundee then had to suffer through a brief period of play where they could not connect en0ugh passes to get out their own end but their resilience soon paid off as Spencer Dorowicz broke the deadlock on 13 minutes.

Sebastian Bengtsson had stole the puck away from one Flyer before moving in on goal and at the last minute, the Swede squared a pass to set up Dorowicz for an easy finish.

Then, from the restart, the visitors quickly pushed for a second and came close to it, but as Alexandre Ranger tried to force the puck home, he was slashed by Owen.

The angered Fife goalie then received a two minute penalty for slashing and that gave the Stars the first powerplay of the night, but they failed to extend their lead after a number of close calls in front of the Fife net.

The first period ended with Omar Pacha’s men holding the tightest of leads, but in the second session they were swift to double it.

After wasting another powerplay, the Stars began to bear down on goal even harder and that saw Combs move Dundee 2-0 ahead on 30 minutes.

The Stars leading point-scorer had skipped between two Flyers d-men before slotting the puck past Owen but in the build-up play Dundee keeper, Brython Preece had made a crucial pad save to keep out Craig Peacock, who was on a breakaway.

The Flyers then responded quickly to get on the board and cut the lead back to one as Brandon Magee was on the edge of the crease and turned in the rebound of Carson Stadnyk’s long-range shot, inside 34 minutes.

Dundee then had to fight off a short period of pressure from the Kirkcaldy club and then they made a late push to regain their two-goal advantage before the end of the second.

With Bengtsson blocking the vision of Owen, Combs was able to slip his shot under the legs of the Fife goalie in the 38th minute and make it 3-1 to the Stars heading into the third period.

Dundee would not look back and powered onto victory, with defender, Michael Poirier picking out the top corner of the Fife goal on 46 minutes and inside the dying minutes, Connor Sills netted a fifth to lift an already overjoyed Stars support even further into the ascendency.

A big 5-1 victory in the building of their biggest rivals has not only given Dundee the bragging rights but also secured their place in the playoffs for the first time in Omar Pacha’s tenure.

Now, the Stars have four games left to jostle for a higher position in the league to determine their final seeding and next up is the reverse of tonight’s fixture, as the Flyers arrive at the DIA for the first of two games in five days.