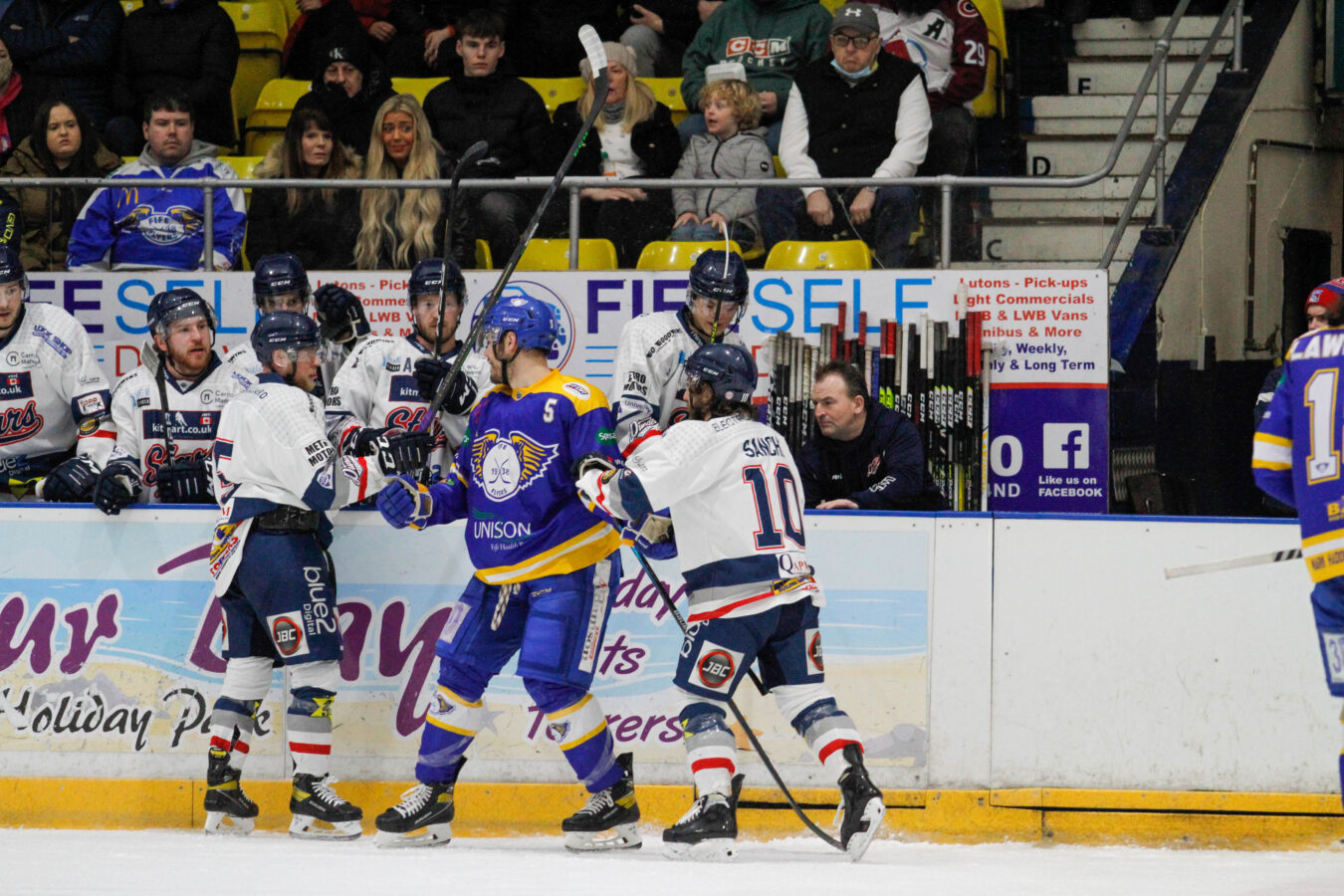 The Kitmart Dundee Stars bounced-back from defeat with a big win over their arch rivals, Fife Flyers on Sunday night in Kirkcaldy.

Both sides were at full strength for the Tayside Derby and it only took three minutes for the first penalty of the night to be called, as Flyers Erik Naslund was called for a high-stick.

The Stars did not capitalise straight away on the powerplay but did test Fife goaltender, Shane Owen with a range of shots.

Just after the home side’s penalty had expired, Dundee’s goalie, Adam Morrison make a remarkable save to deny Kristian Blumenschein of the opening goal.

However, the Stars leading goal scorer, Sebastian Bengtsson would break the deadlock just minutes later, when he beat Owen with a rising shot into the top left corner, on seven minutes.

Todd Dutiaume’s men responded well to falling behind early on and straight away, former Star, Matt Carter forced the ex-Flyers keeper into making another crucial stop.

The action would continue to go from end to end as Dundee put the puck in the net again, but Spencer Dorowicz’s goal would be ruled out as Stars forward, Gabriel Desjardins collided with the goal and knocked it out of place.

The Flyers soon hit more penalty trouble as Owen was punished for tripping up Dorowicz on 12 minutes and with Brandon Magee in the box to serve the keepers penalty, the Stars doubled their lead.

Dundee’s Charlie Combs had all the time and space he needed in front of goal as he quickly sent Bengtsson’s pass from behind the goal, straight into the net after 13 minutes.

The two teams then began to play with intensity and upped their physical game, which resulted in penalties against both Chris Lawrence and Dorowicz.

There was also some handbags after the buzzer between Dundee’s Quinn O’Brien and Fife’s Craig Peacock as the pair had a quick tussle before the officials stepped in.

The middle period saw both clubs searching for the next goal that would likely decide the rest of their night but what they got was a lot more penalty minutes.

Numerous minor penalties were called by referees Toby Craig and Robin Elliot throughout the second stanza but the only one that mattered was in the final minutes.

With Lawrence back in the box on a slashing charge, Dundee again utilised the man advantage and Combs would net his second of the evening on 37 minutes.

The American finally pulled a move off that the Stars had tried three times in the minutes before.

Combs positioned himself just off Owen’s left post and when he received the puck, he quickly moved across the front of goal and shot low into the bottom right corner.

Just before the period ended, Combs nearly had his hat-trick but his last minute effort rung off the crossbar.

The Flyers did finally get off the mark but it was not until the 52nd minute, although Matt Carter’s goal from a rebound did boost their hopes of making a comeback.

That was until Greg Chase felt like he had been fouled and made his feelings known to the referees and for his troubles, he was thrown out of the game for unsportsmanlike behaviour.

With less than four minutes to play, the Stars went back on the powerplay and rounded off a good performance with a fourth goal.

Gabriel Desjardins would be on hand to push home the rebound from Michael Poirier’s shot in the 58th minute and that would also be Dundee’s third powerplay goal of the night.

A bounce-back win now sets the Stars up nicely for their double head against the Elite League leaders, Sheffield Steelers next weekend.