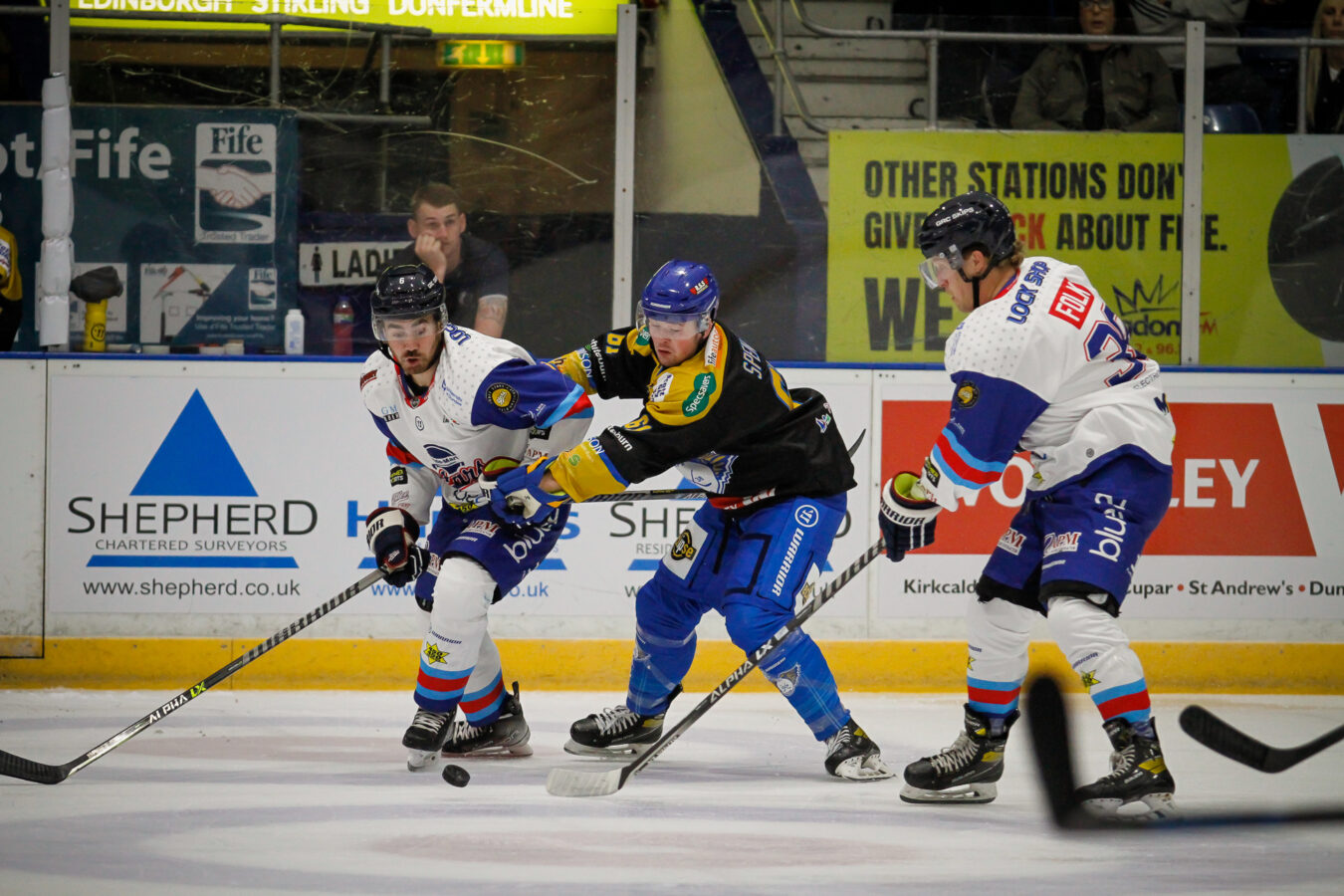 The Trade-Mart Dundee Stars started their Challenge Cup campaign in Kirkcaldy on Saturday night as they faced Fife Flyers in a Tayside Derby and Dundee were aiming to kick-off their season with a big road win over their rivals.

A short-benched Fife side lined up against Dundee, who outnumbered them but were still missing forwards, Ben Sokay and Craig Garrigan through injury and also, Jonathan McBean who was playing with Solway Sharks in the English league, NIHL 1.

Both the Stars and the Flyers played with a slow tempo to start but they quickly ramped things up with some hard hits and fast counter-attacks across the ice.

However, the first real scoring chance came in the 12th minute as Fife defenseman, Fynn Page was penalised for a holding foul and that allowed the Stars to punish their hosts and take the lead.

Dundee blueliner, Drydn Dow picked out Philippe Sanche with a cross-ice pass and the Canadian smashed a first-time effort past Shane Owen at his near post.

The Stars then had to defend their lead straight away as a penalty against Devon Daniels put them down a player, but a flurry of fouls then resulted in both teams losing men throughout the rest of the first period.

Heading into the second session, Jeff Mason’s side still held a 1-0 lead and had a little bit of powerplay time carry over, although they were unable to double their advantage, before it expired.

Dundee were then thrown into a hard spot as two double-minor penalties for high-sticking put them down to three skaters for over three minutes.

Former Star-turned-Flyer, Dillon Lawrence caught a stick to the face, twice and that resulted in both Carter Folk and Chris Gerrie having to sit for four minutes each.

A call against Christian Hausinger levelled things off briefly, before Gerrie was sent to join his teammate in the sin bin.

Remarkably, Dundee defended well and kept the Flyers out with netminder Anton Svensson producing some crucial stops to keep the Stars slender advantage intact and the failed powerplay would have left Fife bosses, Todd Dutiaume and Jeff Hutchins frustrated, as their side wasted a key chance to turn the game around.

Towards the end of the middle period, the Flyers found themselves in penalty trouble this time and back-to-back powerplays gave the visitors the chance they needed to double their lead.

Converting Dundee’s second powerplay goal of the night was Elijiah Barriga, as the American bagged his first goal at the pro-level, by cutting across the Fife goal before lifting his shot into the top right corner of Owen’s goal, on 35 minutes.

The Stars were cruising after moving 2-0 in front and the Flyers could feel the game getting away from them, and it quickly did in the third stanza.

After just two minutes of play in the third period, Chris Gerrie bagged his first goal for Dundee and put his side 3-0 ahead and near enough out of reach.

The Canadian found a way past Owen down low as he shot from out on the right wing and from there Mason’s men set the tempo to whatever they liked and eventually a frustrated Fife side reached their breaking point.

There was also a chance for the Lawrence to get his side off the mark as he was awarded a penalty shot in the 52nd minute, but he was unable to find a way past Svensson, only further adding to the Flyers frustrations.

The game became a lot more physical and a few big hits were laid by both teams, all over the ice as different players responded to protect their teammates, but eventually Hugo Reinhardt and Fife’s Lucas Sandstrom answered the ring of the bell and dropped the gloves, inside the final minute.

A quick tussle with a few punches followed but Reinhardt swiftly put his opponent on his back and that was the end of it and the end of the night.

A shutout for Svensson and a win for Mason on his Head Coaching debut was just the start the Stars wanted and they can take that momentum back to Dundee for Sunday’s clash with the Glasgow Clan.