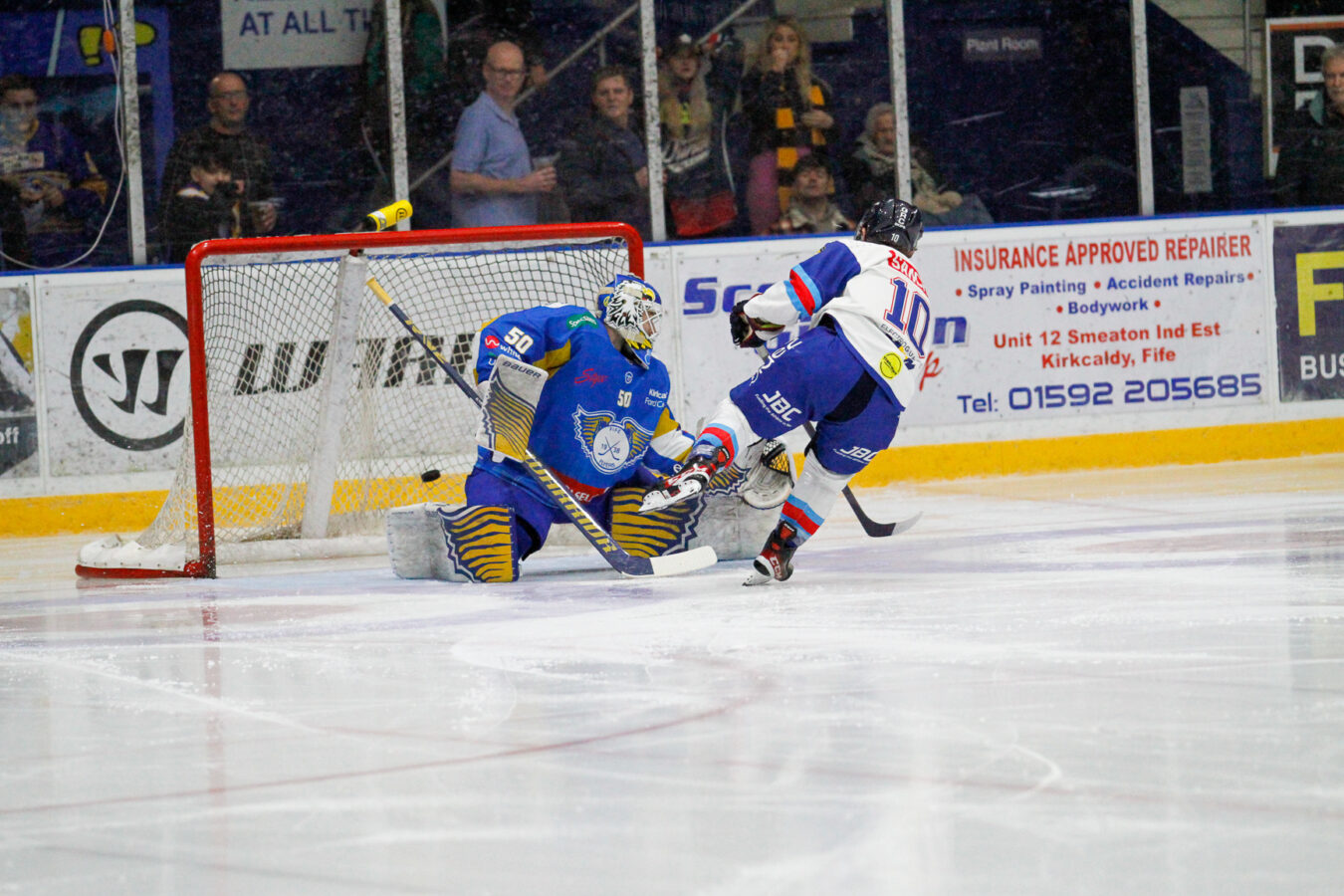 The Trade-Mart Dundee Stars secured their first four-point weekend in league play after protecting their unbeaten record in Kirkcaldy, on Saturday night.

The Stars arrived in Fife without defenseman, Colin Joe and forward trio, Ben Sokay, Ben Brown and Jonathan McBean but that did not stop them from competing hard against their arch rivals, all night-long.

Fife would have the quicker start in terms of creating chances but Dundee goaltender, Anton Svensson did not allow an early goal that would upset his side’s gameplan and on the 17-minute-mark, that gameplan produced a lead for the Stars.

With control of the puck in the Flyers end, possession came to Swedish forward, Romans Semjonovs and he quickly buried his effort, low past Shane Owen to open the scoring.

However, the home team were only behind for 51 seconds as some luck helped them to tie the game up, as Janne Kivilahti’s effort became stuck behind Svensson’s leg pads and as every player lost sight of the puck, the Swedish keeper tried to seal it for a whistle, but as he turned his legs to defend from any poke checks, the puck sprung out and across the line.

The first period ended with the two teams still tied, but the score would change after only 23 seconds of play in the second session, as Dundee’s Philippe Sanche made a quick break through on goal but was brought down, right in front of the Flyers net.

After colliding with Owen, Sanche was awarded a penalty shot and showed nerves of steel to smack the puck straight into the bottom right corner, re-establishing the visitors lead.

The rest of the middle period was disrupted by constant penalties for both teams, but neither side would be able to utilise their powerplay before time expired again, and in the third stanza, the Flyers would find another equaliser.

With four minutes gone off the clock, Kivilahti netted his second of the night as he evaded a few Dundee defenders before picking out the smallest gap between Svensson and the cross-bar, on the keepers near side.

From that moment on, both sides played with even more energy as control of the match and the scoreboard was up for grabs again, in what had been a back-and-forth game all evening.

Although, a late penalty against Fife’s Mikael Johansson proved to be costly, as the forward was boxed for a tripping foul in the 56th minute and that allowed Sanche to bag his brace, as he beat Owen at his near post with a shot through heavy traffic in front.

Jeff Mason’s men then bravely defended for the final minutes and Svensson continued to produce key saves like he had done all the way through the match, before Elijiah Barriga sealed the two points and the Stars second win on the bounce with an empty net goal, in the final minute.

A crucial win on the first of five away games has given the Dundee the boost they needed as they head out on the road and do not return home until Halloween weekend, when they meet Guildford Flames.

The Stars have also moved up to sixth in the Elite League table and are now three points clear of Todd Dutiaume’s Flyers after seven games.