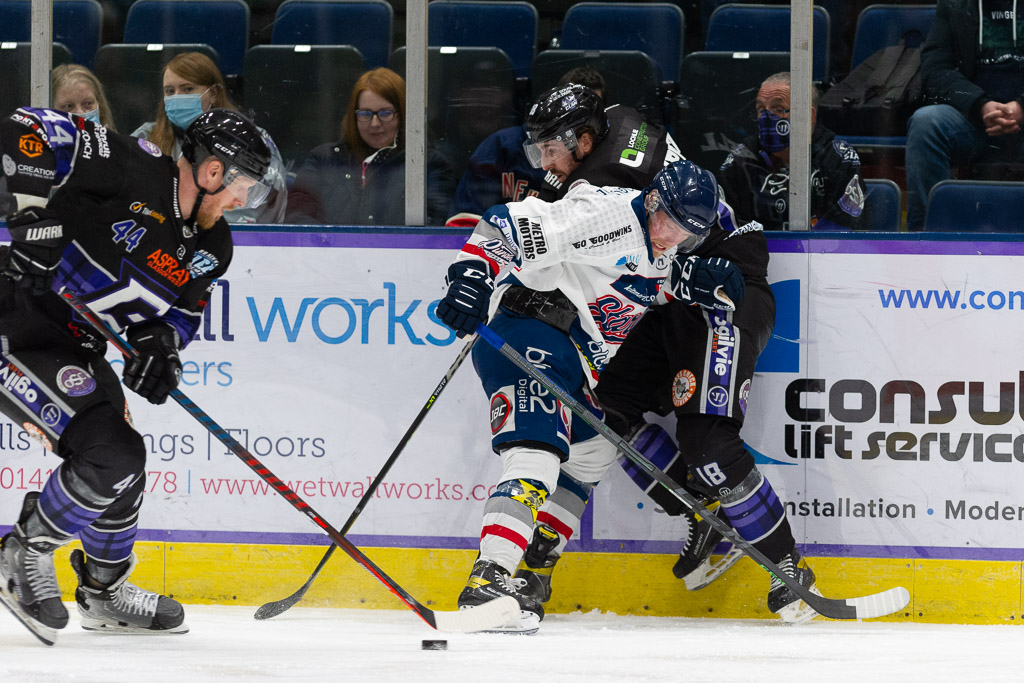 The Kitmart Dundee Stars were in Glasgow on Saturday night looking to bounce back from defeat with a win over their Scottish rivals.

After an intense pair of games the last time these two teams met, this match started off by letting some of that tension go.

Inside the opening two minutes there were two fights, as Kyle Haas and Glasgow’s Dyson Stevenson went toe-to-toe and then two seconds after the restart, Kalvis Ozols squared off with Cody Sol from the Clan.

Those two big bouts set the tempo and got the fans engaged early, but throughout the first period the penalty box assistants would be busier than the goalkeepers as each side failed to stay out of the sin bin.

Despite numerous powerplay chances for both teams and one disallowed goal for the Clan, the match was still scoreless heading into the second period.

The middle session did not have much more action as both teams put their heads down and focused on trying to break the stalemate.

It took 39 minutes but the first goal of the night eventually came and went the way of the home side, as Glasgow’s Brock Beaukeboom saw his rising wrist shot fly through a bunch of bodies and into the top of Brython Preece’s net.

The third stanza finally saw the Stars find a breakthrough but it was not until the 56th minute, after a lot of hard work and back and forth with the Clan.

Dundee’s equaliser all started with an important face-off that saw Spencer Dorowicz win possession and knock the puck back to Philippe Sanche.

The Canadian winger then instantly shot the puck towards goal and after Shane Starrett made the initial stop, Dundee’s top goalscorer, Sebastian Bengtsson was lurking and slotted home the rebound to tie the game.

That late strike then forced the match into overtime and after only 50 seconds of three-on-three hockey, Omar Pacha’s men netted the winner.

The Stars had pinned the Clan in their own end, before a mis-placed pass from the Glasgow defender allowed Dundee to rush onto the puck and move in on goal.

Bengtsson was moving sharply and quickly to keep the puck away from the defensemen before quickly finding a route to goal, where instead of shooting, he slid a pass across to the waiting Charlie Combs.

The American wasted no time in flicking the puck up and past the blocker of Starrett to win the match and celebrated with a big dive into the corner, as his teammates swarmed him.

Now, the Taysiders are back up into sixth position in the standings and just one point behind Coventry Blaze in fifth, but also only six off of fourth spot, which is held by Nottingham Panthers.

On Sunday night, the Stars are Kirkcaldy as they take on Fife Flyers for the first of four Tayside Derbies in the next 12 days and they will be aiming to continue their upwards trajectory against a recently beaten Flyers side, who lost 2-1 in Coventry on Saturday.