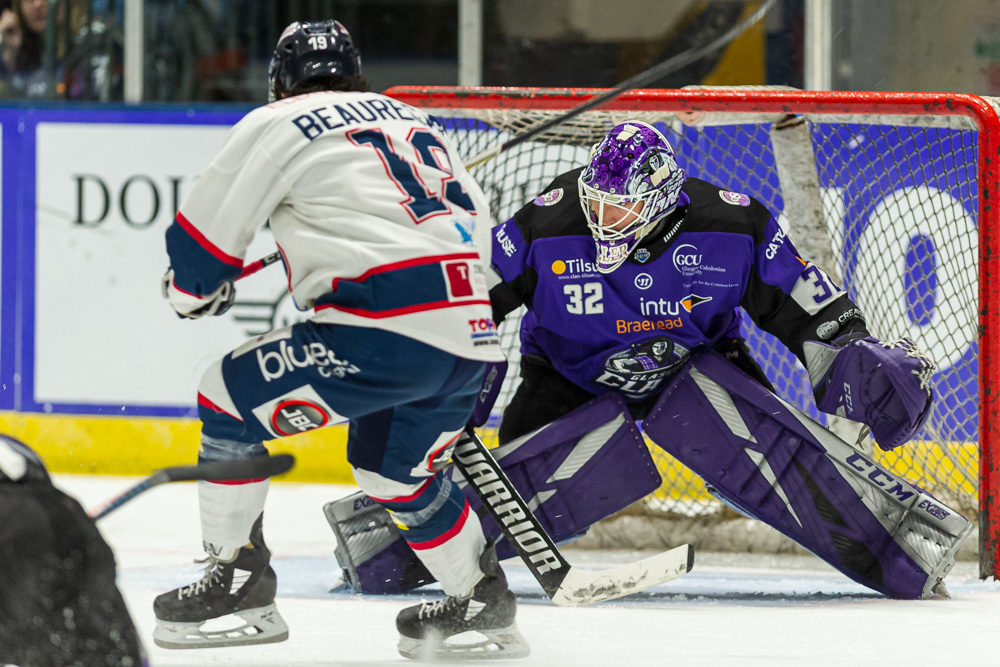 The Kitmart Dundee Stars were aiming to make it four straight wins over the Glasgow Clan this season as they visited the Braehead Arena for the first time in this years league campaign.

Both sides were exchanging chances early on but after absorbing a short period of pressure, the Stars unleashed their forwards who quickly punished their opposition after just five minutes.

After a key blocker save by Dundee goalie Alex Leclerc on a first-time shot from Nolan LaPorte, the puck came to Justin Maylan and he lifted his head to spot, Kevin Dufour racing in behind the Glasgow defensemen.

Maylan sent a long pass forward to his fellow Canadian and Dufour easily dispatched it past Patrick Killeen in the Glasgow goal.

Omar Pacha’s side were then given a chance to double their lead within minutes as some retaliation for a big hit by Jagger Dirk put Mikael Lidhammar in the Glasgow penalty box for two minutes on an interference call after eight minutes.

There were a bundle of scoring chances for Dundee but they just couldn’t the right final touch or shot away and the Clan survived the full two minutes of shorthanded play.

The visitors continued to dominate possession and create all the best scoring chances but Killeen was the Glaswegian’s side’s best player.

Lidhammar returned to the box in the 16th minute as he was charged with high-sticking and again the Stars pounded the Clan’s net with shots but failed to beat the Canadian keeper for a second time.

The Stars nearly lost that lead when Lidhammar was released from the box as he got onto the end of a long pass but Dirk caught up to the Swede and slowed him down with an attempted poke check and that gave Leclerc enough time to close down Lidhammar and he would make the stop.

However, Dirk would go to the sin bin and serve a two minute holding penalty, although Dundee seen it out and as it ended, the first period did too.

In the second period, the Stars had many opportunities to add to their 1-0 lead but they still could not beat the Clan netminder.

Zack Fitzgerald’s men were creating more dangerous chances but Leclerc continued to deny everything and impressively stopped a few shots that were redirected very late and from just inches in front of him.

However, a lucky bounce would start the snowball affect for Glasgow as Jordan Heywood luckily seen his shot roll into the net.

Leclerc had got a big piece of the shot with his right leg pad but the puck bounced up and over his leg before rolling across the line in the 26th minute.

The home side swiftly found their groove and Lidhammar put them ahead 19 seconds after they had tied the game.

He was the recipient of a 100 foot pass from Mathieu Roy and the Swede powered towards the Stars net and slipped the puck under Leclerc as he moved across the goal.

The Braehead Arena irrupted just over a minute later as Travis Ehrhardt blasted a shot from the blueline that flew through traffic and hit the back of the net.

Dundee were given a chance to responded in minutes as Jack Musil was sent to box after driving a Stars player into the Clan goalie in the 28th minute.

Again the Tayside team could not punish the home side’s poor discipline but they would be a skater down themselves minutes later as Matt Marquardt was given a two minute penalty for goaltender interference but it appeared he was pushed into Killeen by a Clan player.

Pacha’s penalty killers did their job though and the Stars went into the dressing room two goals down after two periods.

The third period had a slower start with a much flatter atmosphere but it did not take long for both sides to get going and either were capable of scoring the game-changing next goal.

The Clan were riding their luck defensively and would have felt fortunate to not concede after the puck took an awkward bounce in their end and the Stars could have pulled one back but Glasgow were able to clear the danger after scrambling to defend.

Although, a lot pressure from Dundee did pay off as Colton Kroeker redirected Dufour’s shot past Killeen on 55 minutes.

The Stars went all out in the final moments and pulled Leclerc off for the extra attacker and despite the Clan not even getting a sniff of the empty Dundee net, the visitors could not find the game-tying goal before time expired.

A disappointed Dundee team will have to pick themselves up and put in a similar strong performance against Cardiff Devils tomorrow at home but a quick collapse cost them control of the game and the two points.