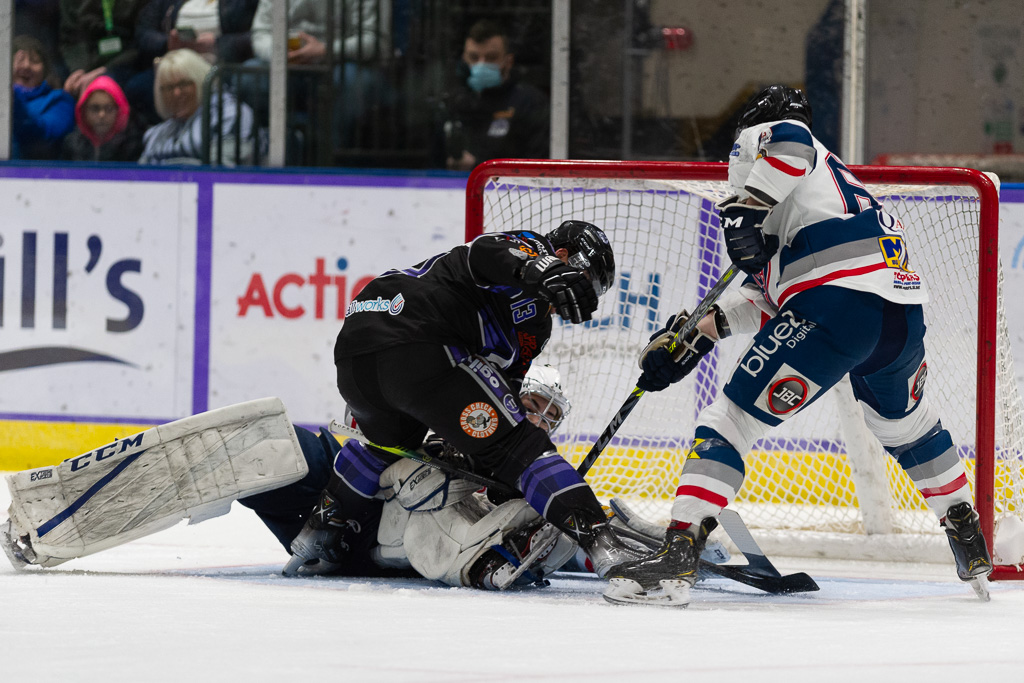 The Kitmart Dundee Stars produced an epic comeback against Glasgow Clan on Saturday night but lost out on winning any points after conceding a last minute goal.

The Stars were in Glasgow searching for their fifth straight victory and fourth consecutive on the road, but they had to do it without captain, Drydn Dow and usual staring goalie, Adam Morrison.

After a fast-paced start to the match that saw both goalkeepers tested out early, it was Dundee who started to produce the dangerous chances more often.

Two standout opportunities for the Stars came in the sixth minute, as Charlie Combs and Spencer Dorowicz broke away from the Clan defences but failed to get the final shot away.

Then just shortly after, Shane Starrett denied the shot of Dillon Lawrence with his blocker and as the rebound looked to be falling perfectly for Connor Sills to slot home, the puck slipped under his stick and the chance was gone.

In the 14th minute, both teams then received minor penalties and each side went down to four skaters, which allowed one team to take advantage of the extra space to open the scoring.

Glasgow’s Mitch Jones would fire the home side into the lead with a long-range slapshot that flew through traffic before beating Brython Preece in the Stars net.

Malcolm Cameron’s men then began to grab the game by the scruff of its neck and managed to double their lead just before the close of the first period.

Clan forward, Braylon Shmyr was lurking in front of goal and was perfectly positioned to flick home the rebound of Colton Waltz’s effort, after Preece had made the initial stop.

The Stars were in need of a response in the second session and they would get one, just not straight away.

After only, 63 seconds of play, the Clan had extended their lead to three goals as Shmyr bagged his brace and had all the time in the world to tap in Guillaume Gauthier’s pass at the backdoor.

However, that ignited Dundee’s fires and straight from the restart, they launched a quick attack that culminated in Sebastian Bengtsson sneaking a shot through the grasp of Starrett, just nine seconds after they conceded.

The two sides then struggled to hit the twine again and became locked in a battle for the next goal, but one team managed to squeeze another in just before the final intermission.

With less than two minutes to play in the second period, the Stars found themselves breaking three-on-two and as Bengtsson, Gabriel Desjardins and Lahtinen switched the puck between them, Starrett was pulled from side-to-side.

That then meant, Desjardins cleanly finished into the gaping goal from the right wing as the Glasgow goalie scrambled to cover the three shooters.

Omar Pacha looked much happier to be going into the final period of regulation with only one goal between the sides and in the third stanza, the Stars soon found their equaliser.

On 50 minutes, Desjardins netted once again as he was left wide-open to turn the pass of Michael Poirier past Starett.

Although, the Braehead outfit almost retook the lead soon after, as in a goalmouth scramble, the Clan players began to celebrate but after a video review, the referees ruled the puck did not cross the line.

With both sides still locked in a battle and extra time looking like it was going to be required, the Stars then shot themselves in a foot as they were caught with six skaters on the ice.

That then gave Glasgow a very late powerplay, with only 69 seconds left and after just 25 seconds, Nolan LaPorte made a solo move down the ice before netting what would be the winner.

A heartbroken Stars side now have a shot at immediate redemption as this fixture is reversed and Dundee play host at 5pm on Sunday.