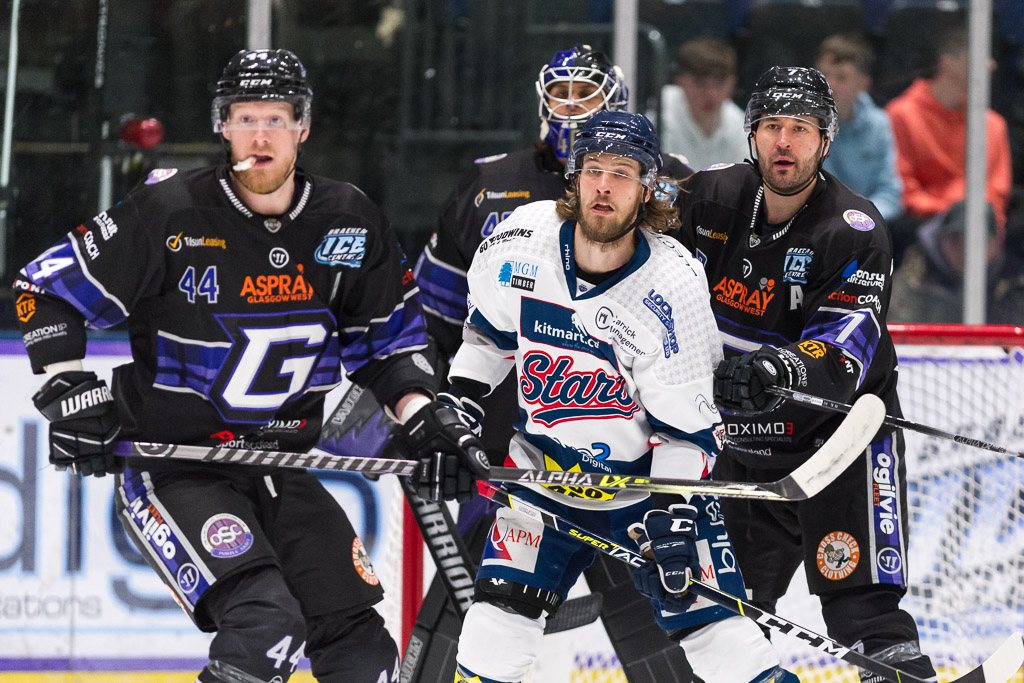 On Saturday night, the Kitmart Dundee Stars made their first trip of the season to Braehead Arena for a Scottish Rivalry clash with Glasgow Clan.

The Stars were missing Charlie Combs, Kris Inglis, Alexandre Ranger and Caly Robertson from their line-up and had to face Glasgow with only three forward lines and five defensemen.

However, despite their short-bench, Dundee did managed to get the better start to the game and had a few early chances.

Although, the closest the visitors came to opening the scoring in the early minute was when they struck the goal post and the same piece of metal would deny them a few minutes later, as Dundee tried to capitalise on the game’s first powerplay.

Eventually the first goal of the night came in the 13th minute, but it went the way of Glasgow and was scored by Mikko Vainionen, as he picked out the top right corner of the Stars net.

Malcolm Cameron’s men managed to maintain their narrow lead heading into the second period and soon doubled their advantage with a powerplay goal.

With Dundee’s Dillon Lawrence, Markus Kankaanperä and Kyle Haas all in the penalty box, the Clan capitalised on their two man advantage as Mitch Jones blasted his shot past Adam Morrison from the high slot.

The home side then quickly added a third goal to push them further ahead as Braylon Shmyr demonstrated hi skilful abilities on 34 minutes.

The Canadian forward took the puck past two Dundee defenders before beating Morrison with a late backhanded shot that flew into the near side top corner, to make it 3-0.

Omar Pacha needed a response from his players in the third period and that is just what he got, as Philippe Sanche got the Stars off the mark in the 45th minute.

Then just three minutes later, Sills turned from provider to scorer as he beat the Glasgow goalie with a rising shot from between the circles.

However, just as the Tayside team looked like they might complete the comeback, they ran into more penalty trouble and with Lawrence back in the sin bin, Mathieu Roy was left unattended in front of the Dundee net and allowed to redirect the puck past Morrison.

With the Stars back to being two goals behind, Pacha pulled out all the stops including using his timeout and swapping his goalie for an extra attacker, but all that would happen as a result would be the Clan scoring into an empty net in the final minutes.

Guillaume Gauthier’s empty-netter secured Glasgow’s second win of the season against Dundee and kept the Clan above the Stars in the league table.

Next up for the Stars is a trip to Manchester Storm on Sunday evening and both sides will be desperate to take something after suffering defeats on Saturday.