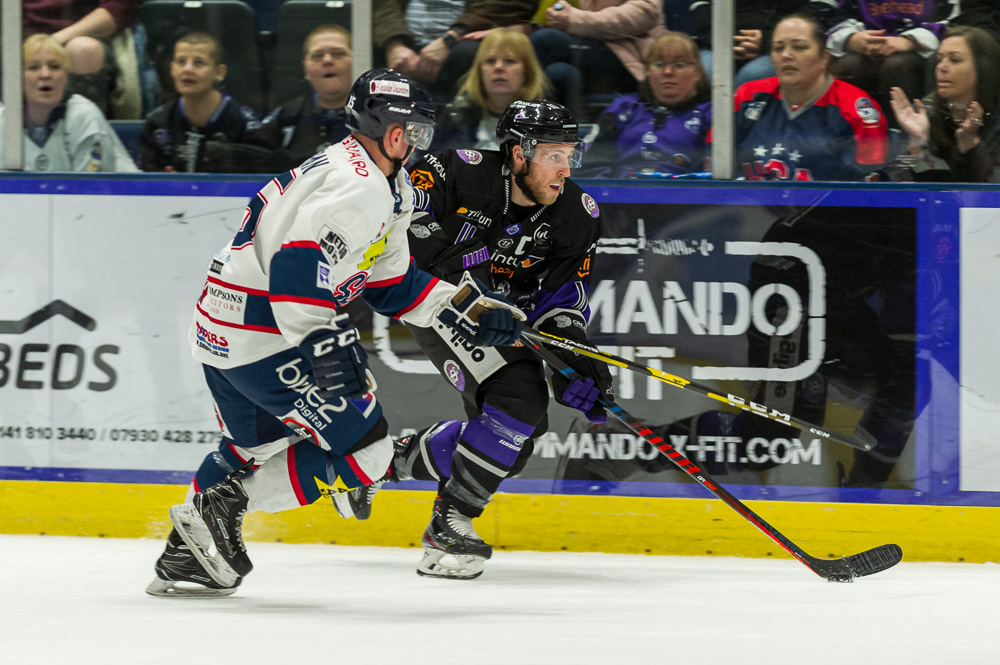 The Kitmart Dundee Stars could make history with a win in Glasgow as they could seal their spot in the Challenge Cup Semi-Finals for the first time in franchise history.

Defenders, Shawn Boutin and Kris Inglis were the pair of players missing out through injury for Dundee, while the Clan had been bolstered by the news that, goalkeeper, Patrick Killeen and forwards, Chad Rau and Scott Jacklin were fit for action, giving Glasgow a full line-up.

The game opened with the play going from end-to-end with both teams playing strong defensive games, as neither side could get a clean shot off.

Stars captain, Matt Marquardt forced a turnover in the neutral zone and that created a good chance for Dundee, as Marqaurdt passed to Elgin Pearce who was racing down the left wing.

Pearce tried to square the puck to a teammate who was driving towards the net but his pass went untouched.

However, a few plays later, the Clan headed up the ice with a two-on-one chance and Mathieu Roy teed up Jordan Heywood, who beat Dundee netminder, Alex Leclerc on his glove side to open the scoring in the fifth minute.

Although after a few chances which tested the Glasgow defences, the Stars levelled the scoring after 10 minutes.

Defenseman, Craig Gans got forward and he beat Killeen with a fast wrist shot that flew up into the left corner.

Following their goal, the Tayside team created a few more scoring opportunities but Killeen was not for giving up anymore straight away.

However, Dundee’s Justin Maylan was the first player to sit in the sin bin as he was punished for a slashing call in the 14th minute.

There were a few chances for the home team on the powerplay but the Stars were able to make the important clearances.

In the 18th minute, Glasgow’s Nolan LaPorte played an excellent pass out into the middle of the ice and it found the stick of Heywood and he could have had a second goal but he put his effort just wide of the post.

A small period of pressure for Zack Fitzgerald’s men was ended as Leclerc dove on top of the puck to freeze the play.

The first period ended with the teams still how they started, tied but when the match restarted, it had a slower tempo for the first few minutes.

Both teams then had to play two minutes with just four skaters as Dundee’s Kevin Dufour and Glasgow’s Craig Moore both picked up penalties on a play but there was a collision behind the Clan goal which left Moore down injured and that brought a stoppage.

Moore had to be helped off the ice and was taken to the dressing room for further treatment.

Just as the pair of penalties expired, Matt Haywood stepped out the penalty box after serving the minor on Moore’s behalf and immediately had a chance to restore his side’s lead but Leclerc made a crucial stop as he closed down the Glasgow captain and held onto the powerful shot.

Quite a few minutes passed before the next chance and when it came it fell to goalscorer, Gans but his slapshot hit Killeen in the head and the brought a whistle and also a powerplay for Dundee as Roy was called for tripping on 32 minutes.

The Glaswegian side killed off the man advantage and started to attack the Stars again.

Clan defender, Linden Springer found some ‘Puck Luck’ in the 35th minute as he blasted a shot from a narrow angle and it slipped under a dropping Leclerc before bouncing over the line to restore the home team’s lead.

There was a chance for the visitors to tie it up straight away but after winning the puck back in the offensive zone, Dufour could not beat the Clan goalie with his shot.

The next five minutes saw the Stars put under heavy pressure by Glasgow and it paid off for Fitzgerald’s men as Jacklin won a foot-race and beat out two defenders to a loose puck.

Once in possession, Jacklin flicked a shot on target but an approaching Leclerc did enough to block the shot with his leg.

However, the rebound sprung out to the trialling Roy, who fired the puck into a wide-open goal after 36 minutes, doubling the Clan’s advantage.

After the goal, Glasgow were on top for a while but there were two late chances for Dundee.

Dufour had the first opportunity as he raced into the the offensive end and tried to wait out Killeen but the goaltender made a timely poke-check to end the threat.

The second chance wen to Egils Kalns as he got closed to goal in the final seconds of the second period but the Stars Latvian forward sent his shot over the bar.

Omar Pacha needed two big goals from his side in the third session if they wanted to be within a chance of making the final four.

The Stars started brightly and they quickly created a scoring chance as Drydn Dow drilled a loose rebound towards Killeen and after hitting the Canadian, the puck dropped and was batted by Pearce towards goal.

The puck again hit Killeen but this time dropped in front of an open section of the goal but there were only defenders next to it and the danger wads swept away.

Dundee really pushed for the next goal which could be game-changing but Glasgow were holding well at the back.

Pearce almost made it 3-2 as he drove towards the net with possession but could not jam the puck past the leg of Killeen in the 53rd minute.

A late pwoerplay chance arose for the Stars as Matt Pufahl was punished for a slashing foul but it was the home team that took advantage of the situation.

Haywood was played in on goal by Mikael Lidhammar and he was left uncontested to shoot past Leclerc on 55 minutes.

However, the Stars could not muster up a comeback in the final minutes to test the Clan’s nerve and the final buzzer sounded to end their cup run at the Quarter-Final stage.