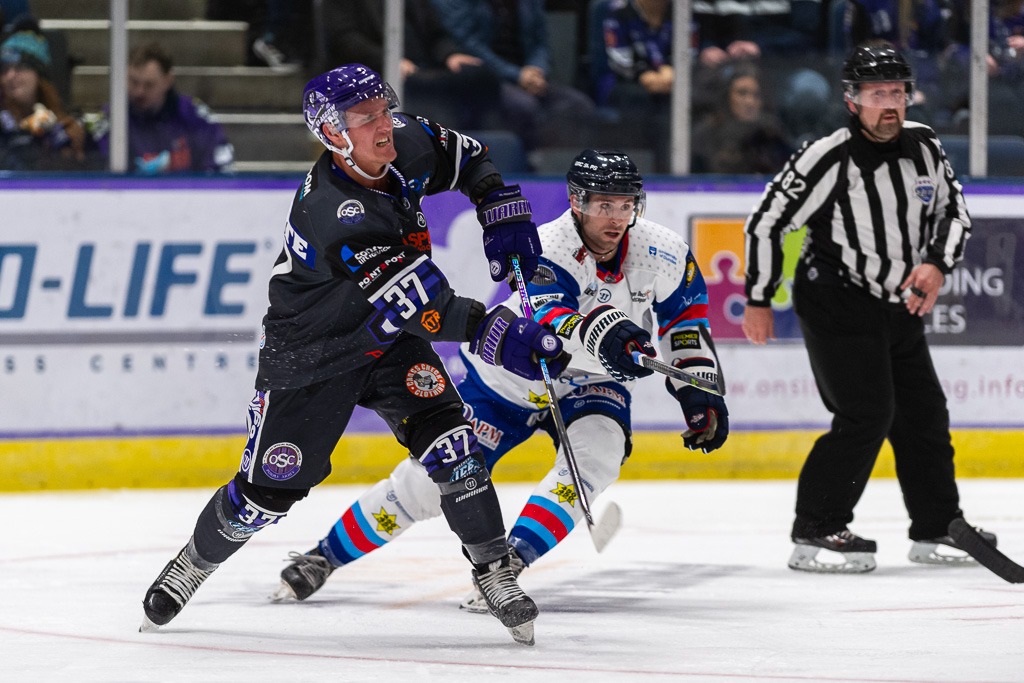 The Trade-Mart Dundee Stars clinched their third win of the Challenge Cup Group Stage and completed the sweep of Glasgow Clan, as they skated to a 3-1 victory at the Braehead Arena.

The Stars were five players short of a full line-up as Ben Brown and Jonathan McBean fulfilled their two-way contracts and Ben Sokay, Kris Inglis and Craig Garrigan all sat out through injury.

However, Dundee made the better start to the match out of the two teams and shortly after an early powerplay chance expired, they took the lead through Hugo Reinhardt.

The Swede took a pass from Chris Gerrie in the 10th minute and from the slot, he fired high over the shoulder of Zach Driscoll to put the Stars ahead in Glasgow.

From then on, the rest of the first period was dominated by penalties as both teams had a few minors to kill off and did so successfully, but the first signs of what would turn out to be a feisty affair in this Scottish rivalry match, showed in the final seconds of the opening stanza.

Displeased after being caught with Ryan Verrier’s stick, Glasgow’s Jordan Buesa rushed at the Stars defender and checked him in the head before dropping the gloves, as the pair went toe-to-toe quickly.

The fight was over swiftly after a few blows, and Buesa’s night also ended there as he was ejected from the game for checking his opponent in the head, while Verrier was assessed the standard five-minute major for fighting.

In the second period, Jeff Mason would see his side make use of their five-minute powerplay, as after only two minutes, Reinhardt netted another and this time Hugo was waiting in front of goal to finish off a nice pass from Dundee captain, Fabrizio Ricci.

With the visitors leading 2-0, the next flashpoint then came at the halfway mark, as Clan defender, Mitch Jones delivered a high hit along the boards on Elijiah Barriga, prompting Drydn Dow to chase down Jones and start a fight.

This scrap was also over quickly as the pair tussled each other to the ice before many punches were exchanged, but the tensions soon calmed down and the Stars held their two-goal advantage heading into the final 20 minutes.

The third period, saw the Tayside team add another powerplay goal as Barriga beat Driscoll with a low shot that slipped under the Glasgow goalie’s pads.

Dundee’s third goal came just 55 seconds after the restart, as Clan’s John Dunbar was in the box for a clipping foul after he tried to take the legs out from under Verrier.

Exactly two minutes later, Malcolm Cameron got a response from his side, when Nolan LaPorte put the home team on the board and he showed great patience with his finish.

After waiting for teammate, Steven McParland to catch up and provide a passing option, before deciding to shoot himself and beating Anton Svensson low into the bottom left corner.

There was then one final scuffle between the two clubs in the 51st minute, when Glasgow had been trying to stab home the puck that was lost under Svensson and after a few heavy pushes, LaPorte and Dundee’s Philippe Sanche became entangled.

Sanche had initially been landed on by LaPorte, but the Canadian quickly got up and shoved the Clan forward into the goal frame before exchanging handbags, which is when McParland arrived and yanked the Star off his teammate, which also aggravated Verrier and caused him to rush to Sanche’s defence.

After all the tussling and shoving was over, both Sanche and Verrier were given two-minute roughing minors and Glasgow’s LaPorte and McParland recieved the same punishment.

The Stars then closed out the match and sealed their third victory of cup group phase, leaving them top of Group A with only two matches left to play, as they have yet to face Belfast Giants, home and away.

However, they first must begin the regular season as they welcome Sheffield Steelers to the DIA tomorrow for their opening Elite League contest this season.