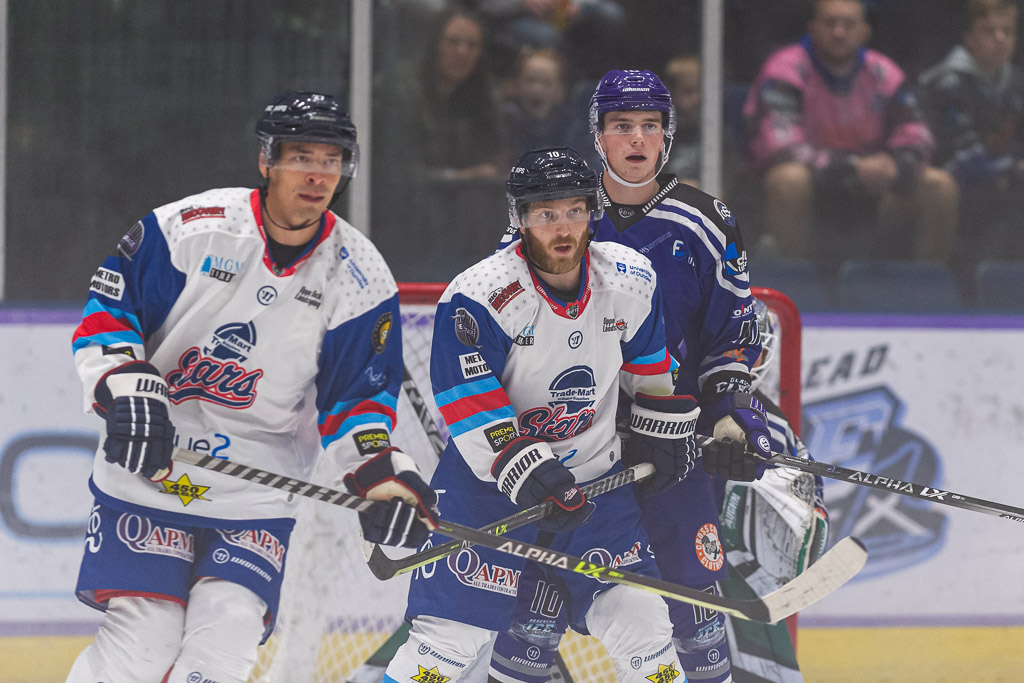 The Trade-Mart Dundee Stars secured their first win of the preseason as they went to Braehead Arena on Saturday night and left with a 6-3 victory over Glasgow Clan.

Two Stars made their debuts in Glasgow as Anton Svensson and Ben Sokay iced in blue, red and white for the first time, but two players also missed out as Craig Garrigan was side-lined through injury and Ben Brown was playing with Dundee Comets, where he scored twice in their opening fixture.

Dundee started well and had a few chances to open the scoring, but the first goal went to the hosts on six minutes as Glasgow’s Brad Kennedy forced a turnover behind the Stars net and the puck fell straight into the path of Craig Peacock, who shot under Svensson from point blank range.

Jeff Mason’s men then had to survive a powerplay for the Clan and the possibility of falling two goals behind, after Chris Gerrie was penalised for holding his ex-teammate and former Star, Jordan Cownie.

Dundee did see out the two-minute minor and eventually tied the game up on the 15-minute mark, as Mac Howlett dispossessed Clan goalie, Zach Driscoll behind his net before feeding the puck out in front for Elijiah Barriga to fire home.

Then four minutes later, Fabrizio Ricci deflected Drydn Dow’s effort past Driscoll to put the visitors ahead and they held that narrow lead through to the second period.

The first half of the middle stanza then saw play go back and forth as both side’s searched for the next game-changing goal and the crucial strike would not come until the 34th minute, when Nolan LaPorte broke down the right wing and buried his shot into the far left side of the Dundee goal, tying the game at 2-2.

Although, it only took the Tayside team two minutes to find a response as Hugo Reinhardt drove towards the Clan net and turned Philippe Sanche’s fast pass, up and past Driscoll.

However, that lead lasted only minute as Peacock bagged his brace when John Dunbar’s lofted pass hit the Brit and fell between the legs of Svensson, before sliding across the line.

With only 20 minutes to play not much was separating the two rivals, apart from Dundee’s extra week of training and two games of experience as Glasgow’s fatigue began to show.

It only took 13 seconds of play in the third period for Dundee to go back in front and Barriga once again had an easy finish, after Romans Semjonovs had been denied on a breakaway by the Clan keeper, but the rebound had sprung straight back out in front for the American to skate onto and hit into a gaping goal.

The Stars then put a chokehold on the game by adding a fifth goal 27 seconds later, this time Drydn Dow using a similar shot from the first period to beat Driscoll from distance.

Malcolm Cameron’s side were tiring and were unable to pull anything back, even with another powerplay chance as Gerrie was once again boxed, this time on a slashing charge, but it was Dundee who were first to capitalise on their first and only man advantage.

Clan’s Gergely Toth was sent to the sin bin for a hooking foul inside the final minute and that allowed defenseman, Ryan Verrier to get in on the scoring as he shot from the top of the right circle and found the bottom left of the Glasgow goal, with only 35 seconds left to play.

Dundee boss, Mason would have been delighted to hear the buzzer sound as he saw exactly what he had been looking for this weekend, as his side came from behind, played with a lead, scored on a powerplay and secured a win on the road.

The Stars now travel home and prepare for their first Tayside Derby and final preseason friendly, as Fife Flyers visit the DIA on Sunday.