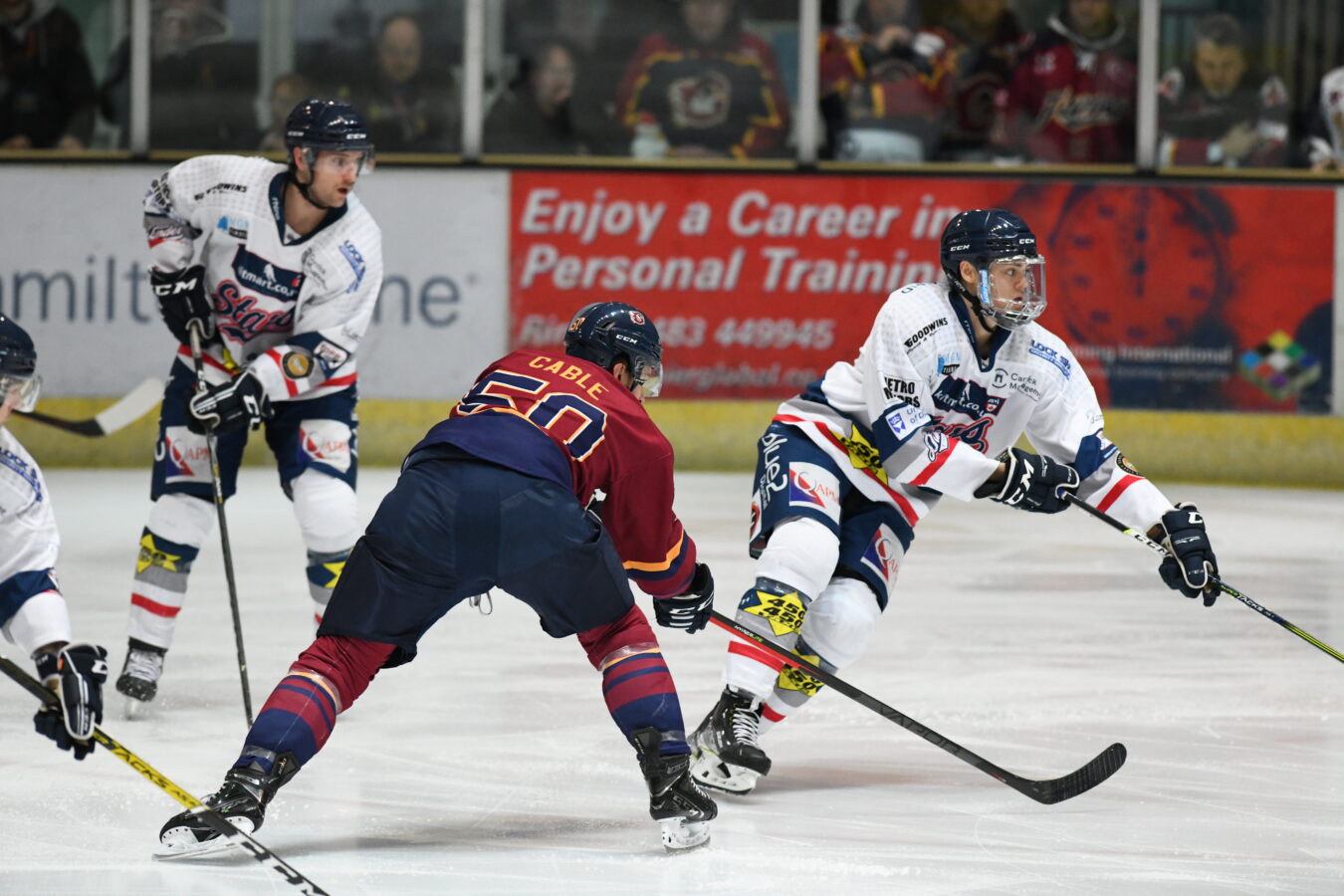 The Kitmart Dundee Stars suffered a heavy 7-1 defeat on the road as they visited Guildford Flames on Saturday night and the short-benched Stars fell behind early on.

With six players out of the line-up, Dundee found themselves 1-0 behind after 82 seconds as former Star, Jordan Cownie saw his shot deflect off the stick of Markus Kankaanperä and loop over netminder, Adam Morrison.

The Flames then doubled their lead on four minutes, via an Ian McNulty powerplay goal and the home team’s second came after Kankaanperä blocked a first attempt with his face, before the rebound fell straight back to McNulty, who finished high past Morrison.

As the first period was drawing to a close, Paul Dixon’s side then made it a 3-0 lead as they pinned Dundee into their own end with heavy sustained pressure.

In the 18th minute, Jesper Alasaari’s shot would be tipped in mid-air by Ian Watters and the significant change in direction took it out the reach of Morrison.

However, Guildford would continue to build on their advantage inside the final minute of the first session and as they opened up a quick break, McNulty and Brett Ferguson worked the puck around the remaining defenders, before playing a neat set of one-two passes.

Ferguson then unselfishly set up McNulty for his brace with a late but perfectly timed return pass for a tap in and that sent the Surrey side into the first break well ahead.

In the second period, the Flames continued to extend their lead and runaway with the match, as they netted a second powerplay goal and their fifth of the evening on the halfway mark.

With Gabriel Desjardins in the Dundee sin bin for hooking, Cownie picked out an open Jake Bolton, who moved forward and rifled a shot from the right circle of the Stars zone, sending it flying in to the far top corner.

Then, 14 seconds later, Kyle Locke made it 6-0, as the Flames capitalised on a Stars turnover at their own blueline and the Guildford defenseman, flung a rising shot through traffic that beat an unsighted Morrison.

There would be no more scoring in the middle stanza, but Omar Pacha would have been disappointed to see his side still off the scoresheet after having three powerplays and a number of dangerous scoring chances throughout the match.

Although, Dundee did finally get off the mark and find a way past Kevin Lindskoug on 48 minutes, with their lone goal of the evening coming from the in-form, new signing, Cody Drover.

Drover bagged his third goal in two matches and the chance came from winger, Charlie Combs forcing a save from the Flames stopper, before rounding the net and passing out to the Canadian.

Drover then controlled the puck and waited out the scrambling goalie, who had spread himself out on the ice and applied a simple finish in the 49th minute.

There would still be on more goal left in the match, as Brett Ferguson also got himself on the scoresheet after 53 minutes.

The Flames won the puck in the Dundee end and quickly moved it around the top of the zone, where McNulty sent a pass towards goal for the arriving Ferguson to deflect up past the sliding Morrison.

The game ended 7-1 to Guildford and they made it two wins out of two at home against the Stars and that also confined Dundee to seven games without a win – their longest baron run of the season.

Next up for the Taysiders is a home game against Manchester Storm on Saturday night before they head across to Belfast to take on the Giants next Sunday.

Hopeful of making a return for next weekend’s matches are Spencer Dorowicz, Philippe Sanche, Bengtsson and the suspended Kyle Haas will be available for selection again against Belfast.