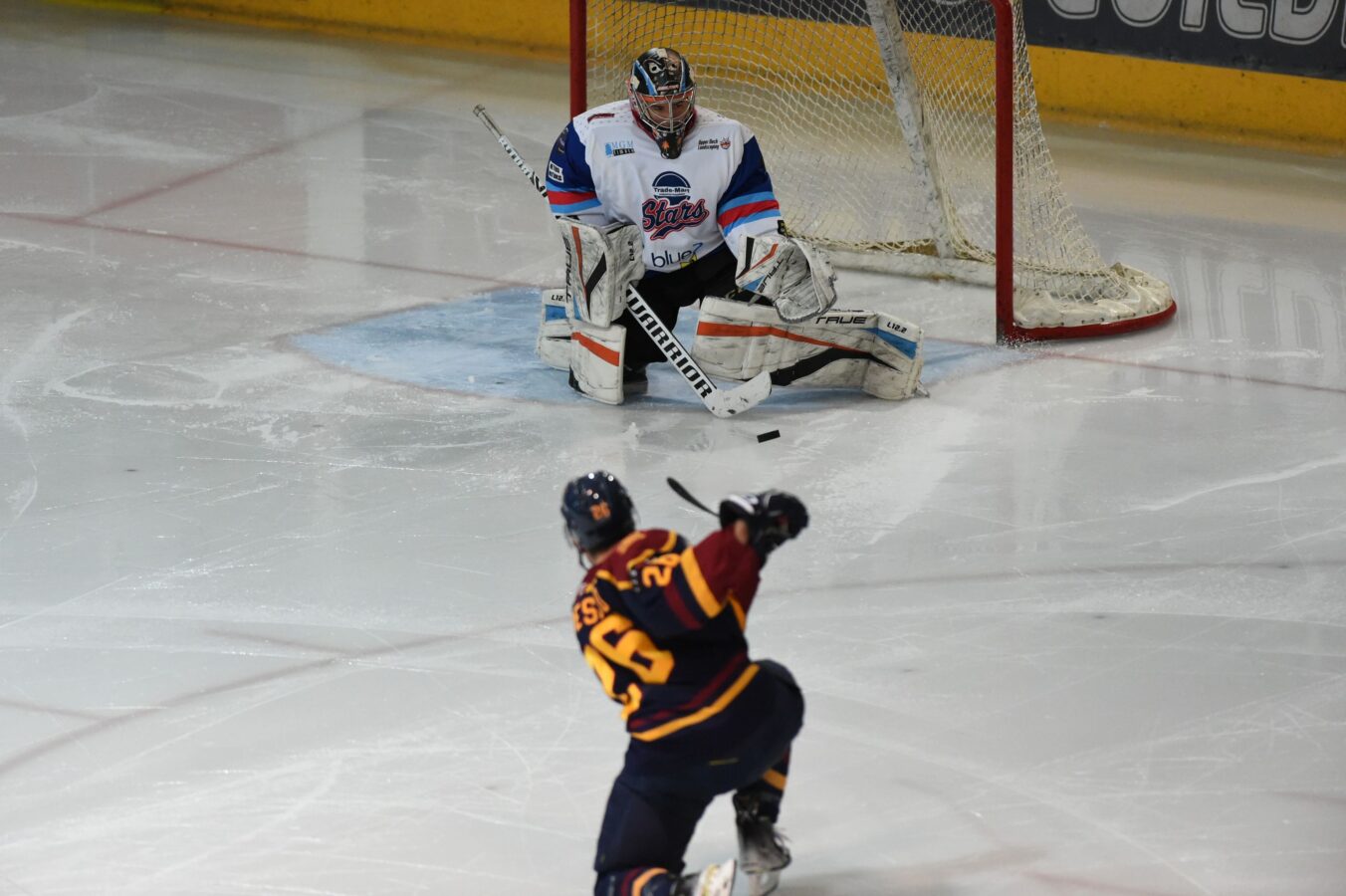 The Trade-Mart Dundee Stars battled with Guildford Flames for the first time this season, as the short-benched Stars visited the Spectrum Arena looking to win their first points of the weekend.

New signing, Francis Marotte would make his debut between the pipes and forward, Ben Sokay returned to the line-up for only his second appearance of the season, as Colin Joe, Phillipe Sanche, Ian Parker, Ben Brown, Jonathan McBean and Brython Preece were all out of the line-up.

Face-off in Surrey was delayed for over an hour due to an on-ice incident before the warm-ups, but eventually once the match got underway, the Flames came out fast and quickly buried the Stars under an avalanche of goals in the opening period.

It took just 84 seconds for the home side to take the lead, when Mike Crocock beat Marotte with a rising slapshot from the left side, as the Guildford forward had time and space to wind up and hit a hard shot.

Then two minutes later, Ian McNulty added a second as he waited in front of goal and shot home Daniel Tedesco’s pass from out behind the Stars net, giving Marotte no chance from point-blank range.

Paul Dixon’s side would then find a thrid goal in the 11th minute as Ben O’Connor’s long range pass played in Peter Crinella down the right wing and he squared a pass acros goal for Robert Lachowicz to turn past the Dundee netminder.

The Tayside team then got the first powerplay of the night but were unable to utilise their man advantage to stop the bleeding and after 15 minutes, the home team went 4-0 ahead when Bradley LaLonde took a cross-goal pass and beat Marotte with a low shot under his pads.

The Stars were also awarded another powerplay with only four seconds left in the first period and it would run over into the middle period.

The Stars managed to get off the mark, just five minutes into the second period as Dundonian defenseman, Kris Inglis hit a long-range effort that found its way past Taz Burman.

However, the Flames would respond on 33 minutes as Ryan Tait used his speed and a quick wrist shot to restore their three-goal advantage and they could have added more on the powerplay but failed to capitalised on three different man advantage opportunities.

Dundee once again made a quick start to the next period and Chris Gerrie, the former Flame, tapped in Fabrizio Ricci’s saved effort at the back post, to yet again cut the lead to three goals after only two minutes of play.

Jeff Mason’s men then cut the lead to two with less than eight minutes to go as Ben Sokay jammed home his first goal for the Stars in his first full appearance, but they were unable to claw back another.

Then with only two seconds left on clock, the Flames’ Sam Marklund would score into an empty net to win the game 6-3.
Next up for the Stars is a mid-week trip across the Irish Sea as they take on Belfast Giants, on Wednesday evening.