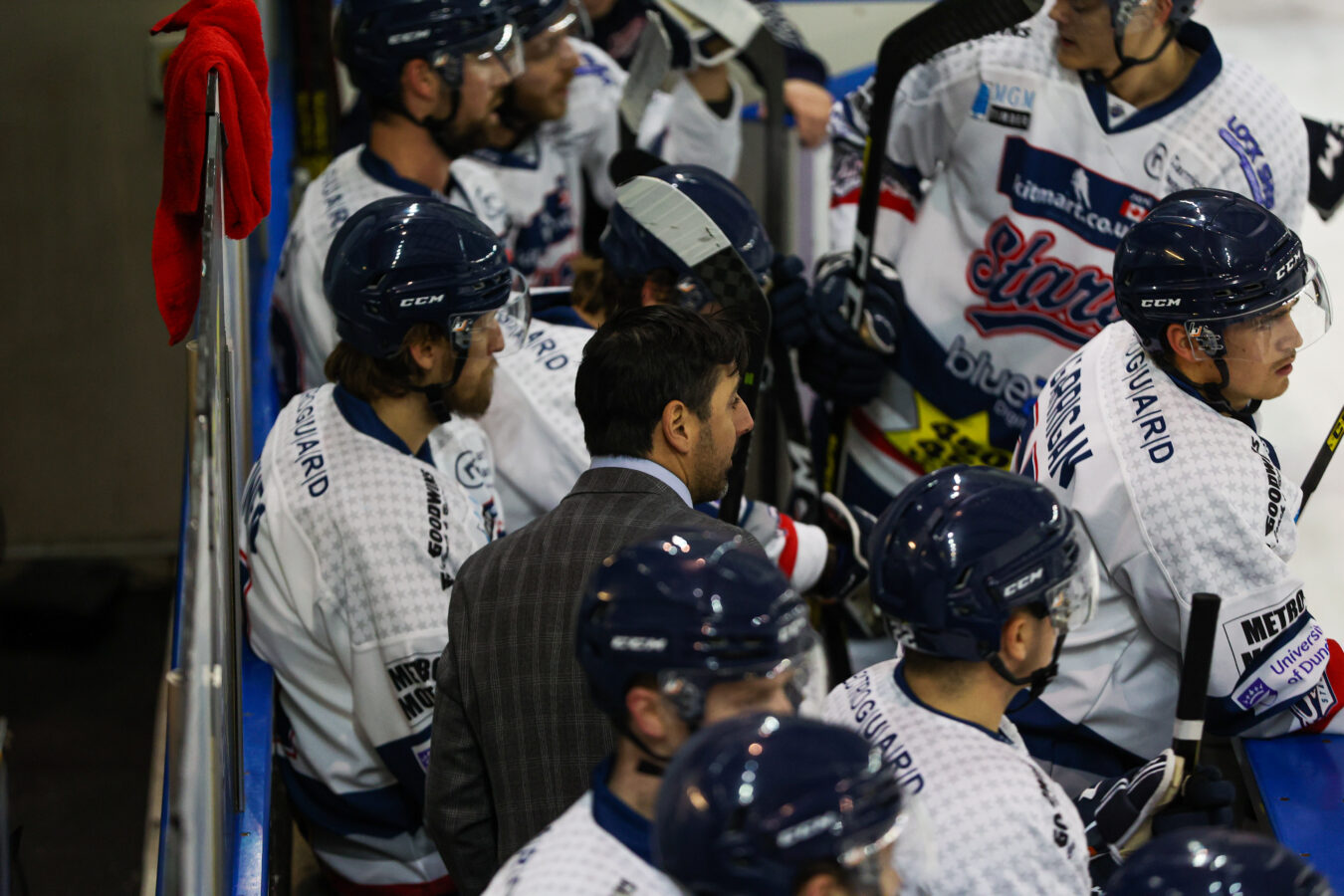 The Kitmart Dundee Stars suffered a heavy defeat on Thursday night in Manchester as they allowed the Storm an early first period lead and failed to recover, despite a spirited fightback.

The Stars did not make the best start on the road, as they found themselves a goal down after less than three minutes of play.

Manchester’s Finlay Ulrick fired a shot from far out on the right wing that snuck past Dundee netminder, Adam Morrison and that opened the flood gates early on.

Minutes later and with a Storm player in the box, the home side quickly bagged two shorthanded goals, by punishing some poor passing from the Stars.

Adam Brady and Curtis Hamilton both intercepted passes in the Dundee end and quickly stuck the puck into the Stars net, moving the Storm 3-0 in front.

Omar Pacha’s men were lacking the ability to get shots through to Matt Ginn’s net and were constantly forced out wide by the Manchester defence.

Eventually, both sides began to take possession from end-to-end and the turnovers continued to be crucial, as all the most dangerous chances came from quick counter-attacks.

As the Taysiders started to generate more chances, the game intensified and before long, the gloves were dropped.

After a scuffle near the benches, Kyle Haas and Manchester’s Ben Wilson decided to go toe-to-toe, from the restart of play.

There were some big punches landed before Haas wrestled his man to the ground and the pair went off to serve their five minute penalties.

However, the Dundee d-man was also assessed a two minute minor for continuing the fight, after he throw a punch when his opponent was on the ground and that put the Storm back on the powerplay, allowing them to net a fourth goal.

Liam Morgan would be the scorer this time, as he blasted a shot from the blue line and it flew past an unsighted Morrison.

Ryan Finnerty’s men held that 4-0 lead going into the first break but a much hungrier Stars side came out for the second period.

The visitors started battering shots on the Manchester goal, eventually totalling 20 shots on goal in that period.

With the Altrincham club running into some penalty trouble of their own, the Stars started to press harder and eventually found a break through.

Just as the game reached the halfway mark, Spencer Dorowicz and Gabriel Desjardins broke down the ice and Dorowicz finished off a cross-ice pass to make it 4-1.

And once more, there would be a fight from the restart, as Charlie Combs took on Storm’s Tyson Fawcett and after a very quick burst of punches, the pair were separated.

Both teams continued their ill-disciplined habits and with the Stars a man down, Cameron Critchlow restored the home team’s four-goal cushion with a slapshot from distance.

At the end of the second, a dominant Dundee, were still four behind and tensions continued to fare between the two clubs, but a much bigger effort was needed in the final session.

Just as Dundee began to look like they would continue their dominant display from the second period and start to turn the tide, the Storm delivered a heavy blow that killed off the game.

Brady made it a brace from himself, as he was afforded space in the Stars end and took the puck close to Morrison before lifting a backhanded shot into the far top corner, on 43 minutes.

However, Dundee did not pack it in and continued to create chances, before soon finding their second goal of the night after 51 minutes.

The goal came from Combs making space for himself to get a shot away from in front of the Storm net, and after Ginn made the initial stop, he was unable to prevent Philippe Sanche from smashing home the rebound.

With the Scottish side pressing harder and harder to make more happen, Manchester slowly began to settle in, in an attempt to kill out the game and that they did.

A 6-2 win for the Storm left Dundee still waiting for their first regular season win of the season but the Stars have a break from league play now, as they head into a Challenge Cup double-header weekend against Fife Flyers and Belfast Giants.

Make sure you buy your tickets for Saturday’s home derby against Fife Flyers HERE!