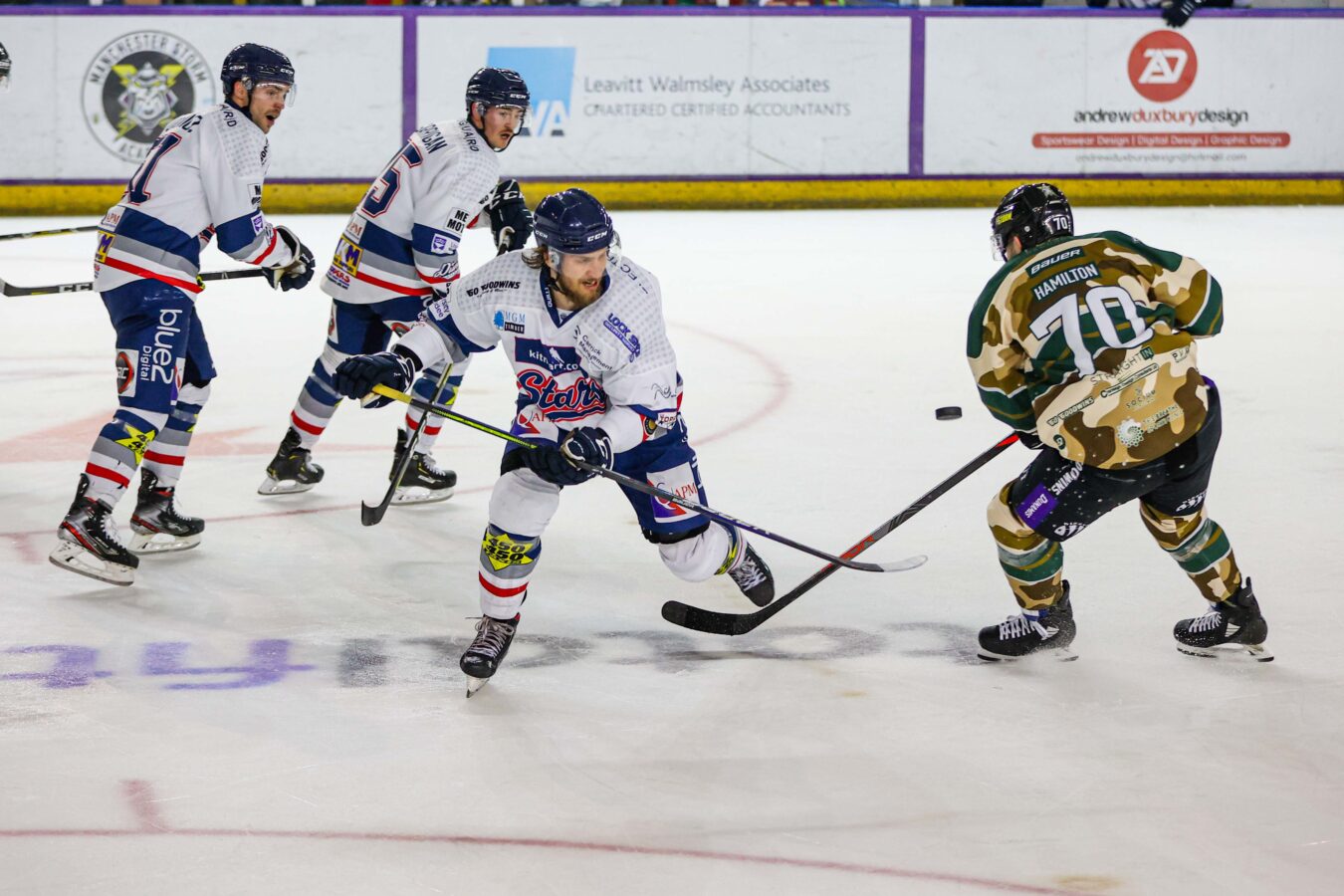 The Kitmart Dundee Stars came up just short as they battled hard all night in Altrincham and chased down the Storm right until the final seconds, but were unable to find a late equaliser in a 4-3 defeat.

The Stars arrived in Manchester without forwards, Alexandre Ranger, Philippe Sanche and Sebastian Bengtsson but had defenseman, Craig Moore available for the first time this season.

Meanwhile, Manchester were forced to start back-up netminder, James Downie, as Matt Ginn was absent and the young Brit was put straight under pressure as his side took a penalty after 60 seconds.

Despite failing to make their early man advantage count, Dundee would still take the lead on four minutes, as Charlie Combs beat Downie with a rising shot at his near post.

However, Manchester would draw level three minutes later as Adam Brady converted from the left flank with a low shot between the legs of Dundee goalie, Adam Morrison.

Both sides then ran into some minor penalty trouble but each netminder was playing well and the next goal would not come until the second period.

With an overlapping powerplay from the first period, the Storm moved into the lead after 29 seconds of play as Curtis Hamilton rifled a shot past Morrison from the right circle.

The middle session was more than eventful but most of the focus went onto the major penalties being dished out by referees Chris Wells and Andy Dalton.

The first major incident in a three-minute span, came when Dundee’s Connor Sills was ejected from the game for boarding a Storm player in the 29th minute.

That major penalty gave the hosts a five minute powerplay, from which they scored twice in quick succession.

Although, shortly after the game restarted, Stars blueliner, Michael Poirier stepped up to deliver a big hit on Tayler Thompson, but the Manchester forward fell just before he was hit by Poirier, causing the Dundee player to plough straight into the head of Thompson.

Manchester’s Tyson Fawcett took extreme exception to the hit and immediately threw down his gloves and began throwing punches at Poirier, who eventually returned some blows.

Moments after the two had been sin binned for scraping, more gloves were dropped as Linden Springer and Combs exchanged words, cross-checks and slashes, before Kyle Haas came flying in to protect his teammate.

A pair of punches from Haas quickly dropped Springer and both were quickly sent off the ice to serve their penalties.

In the third period, Omar Pacha’s men came out ready to redeem themselves and after dominating most of the play, they got their first reward after 48 minutes.

Dillon Lawrence provided the second Stars goal as he took Combs’s pass and picked out the top right corner of the Manchester net, to pull Dundee within two goals.

Although, moments later, he would be injured and would have to miss the remainder of the game after taking a high-stick from Scott Simmonds.

Inside the final minutes and with the Stars goalie swapped for an extra attacker, things got even more interesting as Spencer Dorowicz snuck the puck past Downie to make it 4-3 with just 80 seconds left on the clock.

Despite Dundee pulling their keeper once more, they were unable to find that ultimate game-tying-goal and thanks to spectacular saves by Downie and massive, last-second sacrificial block by VanWormer, the Storm held on to claim the victory,

The Stars must now rest up and get ready to welcome the Belfast Giants to the DIA on Sunday night, as Premier Sports return to the DIA for their first live Scottish broadcast of the season.