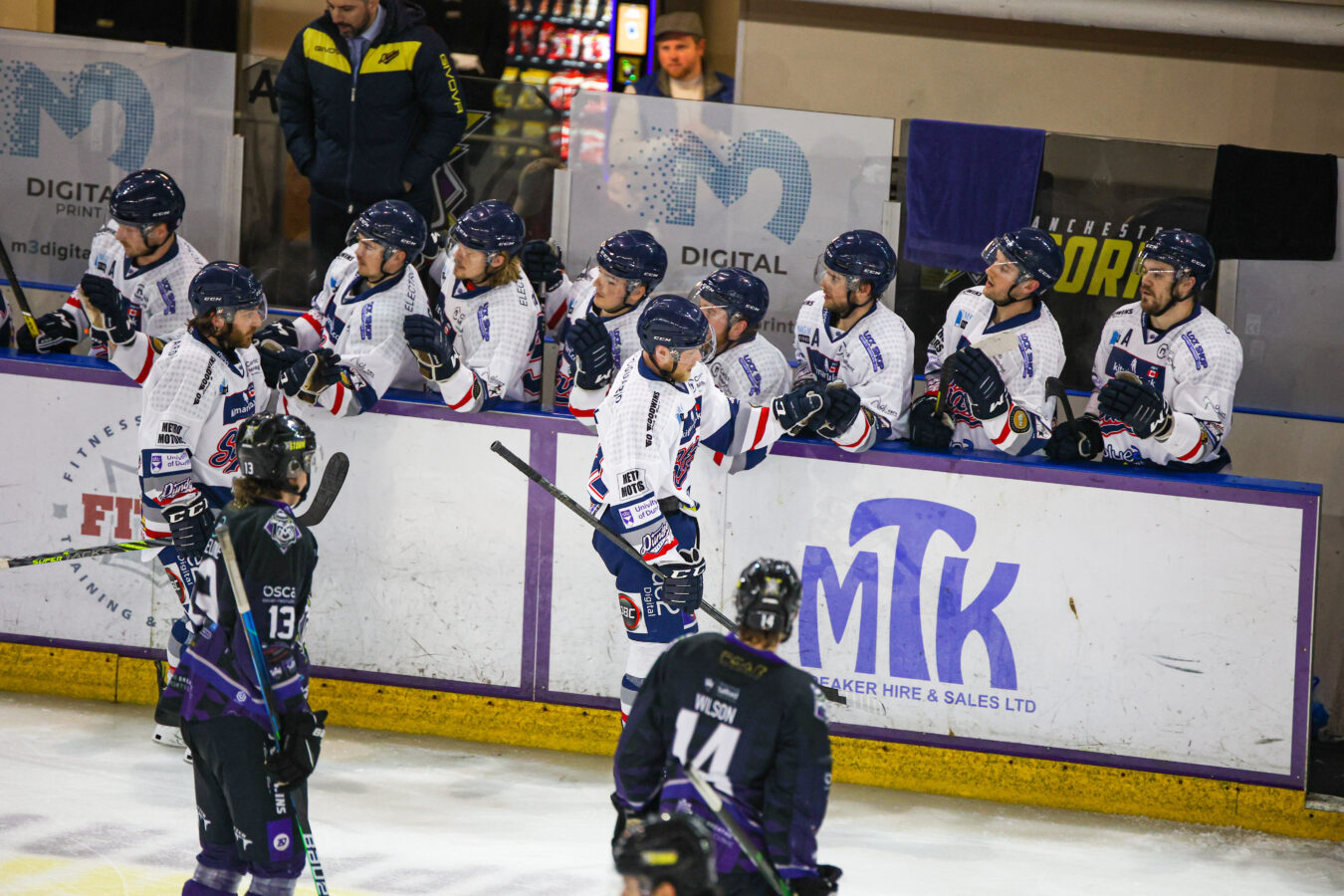 The Kitmart Dundee Stars were looking for their first win of the season in Manchester as they faced the Storm for the final time in the regular season.

The Stars were boosted by the return of forwards, Charlie Combs and Caly Robertson to the line-up, which gave them a full-line up to take on full-strength Storm side.

The opening 10 minutes of the first period were quite in terms of actions as both teams took a cautious approach and eventually chances would start to open up.

Dundee’s Adam Morrison was the first to be forced into a good save as Manchester bared down on the away goal and the home side soon had the first powerplay of the night.

However, Kyle Haas’ cross-checking minor was quickly cancelled out as the Storm’s Curtis Hamilton was penalised for hooking and that would generate some four-on-four hockey.

Although, neither team could find the opening goal and Manchester’s James Downie then had to produce a few stops himself to keep the game in a deadlock.

The biggest chance of the first session came inside the final minute as Tayler Thompson carried the puck forward into the Dundee end with a teammate alongside, however the defensive awareness of the Stars, Markus Kankaanperä prevented the Tayside team from going into the break a goal down, as he dropped down low to block a cross-goal pass.

The two teams were still locked at 0-0 heading into the second period and both teams soon began to throw more weight behind their attacks, which resulted in the stalemate being broken on 27 minutes.

The Stars moved forward through Philippe Sanche and the Canadian winger squared his pass across to the back post, where Sebastian Bengtsson arrived just on time to shoot the puck past Downie.

Omar Pacha’s men then quickly doubled their lead as Sanche bagged a goal of his own inside 32 minutes, when he stabbed home a rebound from the long-range shot of Michael Poirier.

Despite a dominant display through the first 15 minutes of the second stanza from Dundee, their lead quickly vanished as penalties cost them their adavtanage.

Quinn O’Brien would be penalised for elbowing and a face-off violation inside the last five minutes of the middle period, handing Ryan Finnerty’s team a chance to utilise the powerplay.

The Storm quickly got on the board in the 38th minute, as Adam Brady beat an unsighted Morrison with a shot from just inside the blueline and they soon tied the game through Jared Vanwormer as he fired home the puck with only 19 seconds left on the clock.

The third and final period of regulation time would be massively important for either side in determining not only the outcome of the game but possibly their chances of making the playoffs.

The next goal would once again see the visitors go into the lead and the Stars did not look back after that, as they went on to score four goals in the six minutes.

Bengtsson put his side ahead once again with an outrageous attempt that beat Downie from an extremely narrow angle on 43 minutes, and just 48 seconds later, Charlie Combs skated behind the Storm net before jamming home the puck with a wraparound shot.

The Scottish club then increased their advantage to 5-2 on 46 minutes as they bagged a powerplay goal of their own, with Bengtsson completing his hat-trick by smashing home the cross-goal pass from Combs.

The Stars were then awarded another powerplay in the 50th minute, as Cameron Critchlow was punished for catching a Dundee player with a high-stick and that allowed defenseman, Poirier to net his first goal of the season with a wrist shot from the blueline.

Manchester would answer back with one more goal but that would be all they could offer in terms of a comeback.

Vanwormer secured his brace by driving hard to the Dundee net and poking home a rebound that Morrison had spilled, on 53 minutes.

Then tensions continued to flare, just like they had done throughout the night, but the only flashpoint had been when Manchester’s Linden Springer dropped the gloves and squared off with Connor Sills, following a big hit into the boards by the Dundee forward in the early moments of the second period.

A big win for the Stars tonight has now pushed them two clear of the Storm who occupy ninth in the league standings and Dundee do hold three games in hand.

The Stars also remain just three points off of fifth place and can close that gap next weekend when they take on the fifth-placed Guildford Flames and Fife Flyers, who prop-up the table.