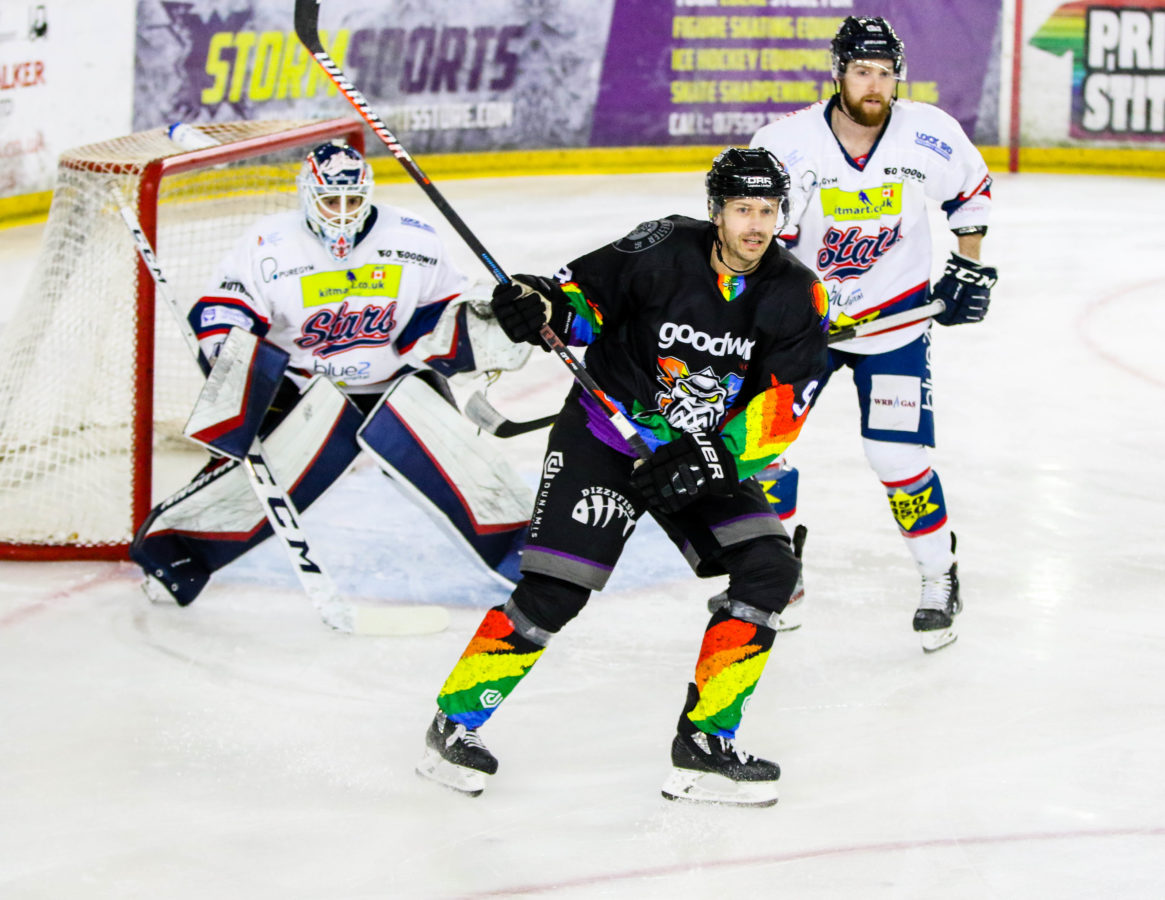 The Kitmart Dundee Stars were in Manchester on Sunday night for the final time in the regular season and both teams came out with a high tempo and fast paced game to start things off.

The first 10 minutes of play saw the action go from end-to-end but both goaltenders came out on top as the match was still scoreless, despite some key chances for each side.

There was then a good opportunity for the Stars to take the lead as a turnover behind the Manchester goal allowed Egils Kalns to win possession and he made his way to the front of the net before delaying his shot as he skated around Matt Ginn.

However, either Ginn or the covering defenseman managed to send the shot wide and down the other end, there were then chances for Manchester’s Frankie Melton but he could not open the scoring either.

The back and forth exchanges continued until the first powerplay of the game was awarded to Dundee after Cody Thompson took exception to Jordan Cownie bumping into the Storm goalie and that left him in the penalty box for roughing with 45 seconds left on in the first period.

Omar Pacha’s men still had powerplay time to start the second period but the home side were able to kill off the final part of the penalty.

Although, Dundee kept the pressure on Manchester they fell behind after taking their first penalty of the night.

With a delayed penalty against Dundee, the Storm got an extra attacker out on the ice and worked the puck around before Jared Aulin sent a pass across the face of goal to the back post for Mario Puskarick to fire home on 26 minutes.

The Tayside team hit more penalty trouble in the 32nd minute as Brett Stovin was punished for a tripping foul and that allowed Ryan Finnerty’s men to double their advantage.

This time it was Tyson Fawcett who found the twine, as he released a fast wrist shot from the left wing and it beat Alex Leclerc high on his near post after just 52 seconds of powerplay time.

Then 33 seconds later, things got worse for Dundee as Mathieu Gagnon made it 3-0 after he beat Leclerc with a rising shot from just inside the blue line.

There were further chances for the Stars on the man advantage but they still trailed by a trio of goals going into the third period and again they would restart with a powerplay.

In the third session, Dundee started well and created a few good scoring chances but again they failed to capitalise whilst a man-up.

A foul by Manchester’s Cam Critchlow gave the visitors another powerplay chance but the Stars were still snake bitten and that showed to be the case as they hounded the Storm goal with shots but found no way past Ginn.

The closest they came to scoring was when one shot hit the post but the Scottish side bombarded their opponents for the rest of the game and were continually denied by Ginn, who was in sensational form.

The final buzzer sounded to end a night of bad luck for Dundee but they will be back in action next Saturday as they visit Glasgow Clan.