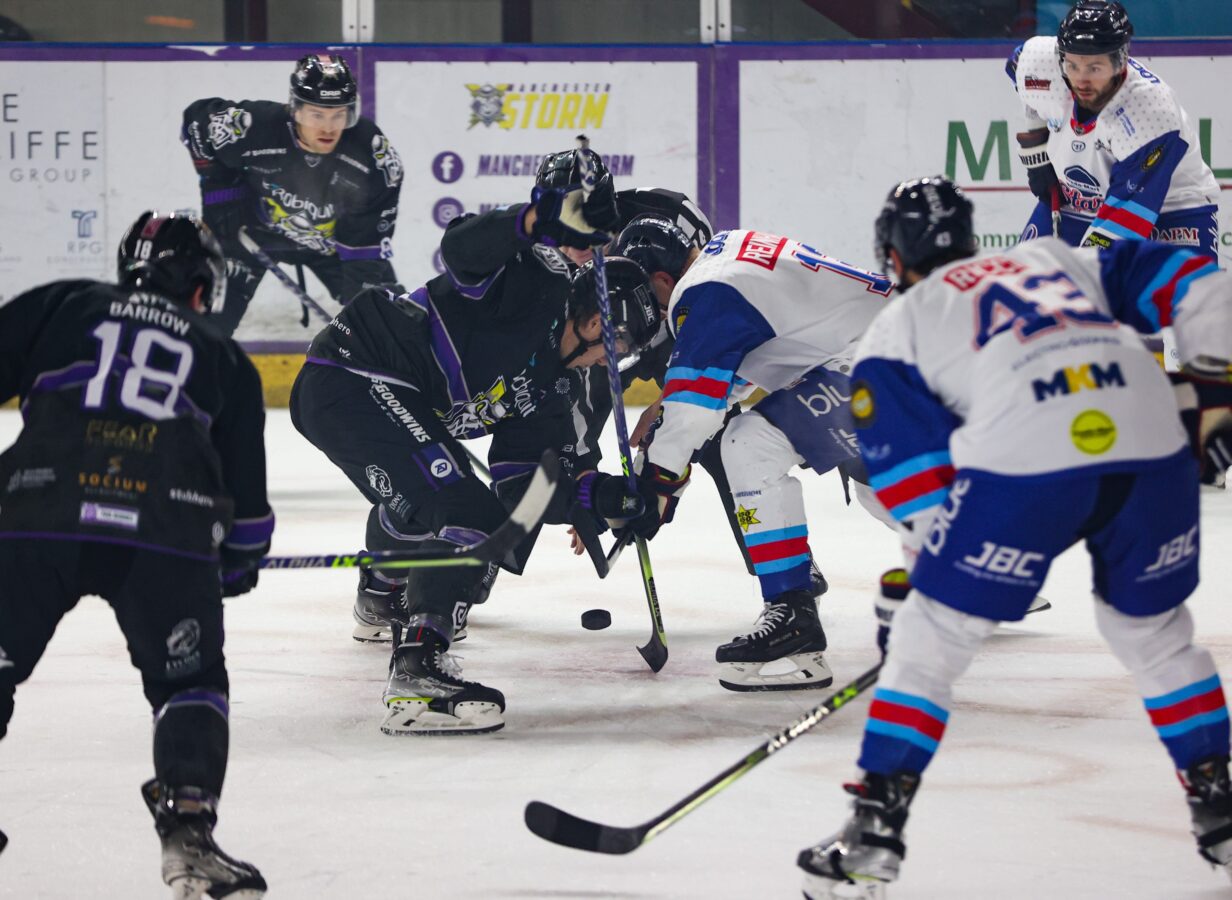 The Trade-Mart Dundee Stars suffered a defeat on the road against Manchester Storm on Saturday night, as their three-game-winning streak came to an end.

The Stars arrived in Altrincham without defenseman, Colin Joe and forwards, Ben Sokay, Ben Brown and Jonathan McBean but new arrival, Francis Marotte was in the line-up, as he deputised for Anton Svensson.

The match had a fast-paced tempo to start with both teams taking the puck back and forth across the ice and even with a few powerplays in the opening minutes, the first goal of the night would not come until the 11th minute.

It would be the home side who took the lead first as Manchester’s Jake Bricknell picked out the top corner of the Stars net from the top of the left circle, rifling his shot over the shoulder of Svensson.

However, Dundee were not behind for long and found an equaliser five minutes later through Elijiah Barriga, as the American jammed home a loose puck following Drydn Dow’s shot from the point.

The first period had a feisty end to it as a few roughing penalties and handbags sparked some tensions between the two sides and there would be two goals that came from powerplays in the middle session.

The Stars fell behind again as blueliner, Kris Inglis was punished for a tripping foul and that allowed Jesper Ohrvall to pick out the far top corner of the Dundee net, from inside the left circle on 23 minutes.

The Storm then doubled their lead with another powerplay goal as they had five uninterrupted minutes of powerplay time after Dundee’s Mac Howlett was given a major penalty for boarding Ryan Barrow.

Three minutes after scoring his first, Ohrvall netted a carbon copy but the only difference being that he beat Svensson at the near-side top corner, to make it 3-1 to Manchester.

Jeff Mason’s men then failed to capitalise on their own powerplay and cut into the lead before the final intermission, but in the third period, they would convert with their special teams.

Manchester’s Scott Simmonds would be given a minor penalty after he collided with the Stars goalie as he raced through on goal trying to catch an over-shot pass and it took Dundee only three seconds to score with the man advantage.

Barriga won the face-off and played the puck straight back to Dow, who used Ian Parker’s six-foot-nine-inch frame as a screen and beat Hayden Lavigne with a rising effort, into the top left corner in the 41st minute.

Although, Manchester would soon storm into a three-goal lead to put themselves out of reach, with Anthony DeLuca’s saved effort being batted out of mid-air by Stephen Johnson, to make it 4-2 inside 53 minutes.

Then, three-minutes later, Ohrvall would secure his hat-trick as he saw his effort saved but the puck was sent skyward and luckily for the Swedish forward, it fell in behind Svensson and bounced off the Stars keeper and into the net.

There had also been a major penalty called against Manchester before they scored their fifth goal, as Bricknell threw a hard hit into the head of Dundee’s Philippe Sanche along the boards, resulting in him being ejected from the game.

Bricknell also had to defend himself from the aggravated Inglis who chased down the Storm player after the illegal hit, with Inglis receiving two-minutes for roughing.

There was also one final set of roughing penalties dished out in the final minutes of the match, as Scott Simmonds collided with Stars’ Hugo Reinhardt and Carter Folk took exception to the hit and went after the Manchester winger, but Simmonds had no interest in dropping the gloves, leaving the pair with minor penalties after a short tussle.

Next up for the Stars in Sunday’s visit to Guildford Flames as they battle the Surrey club for the first time this season.