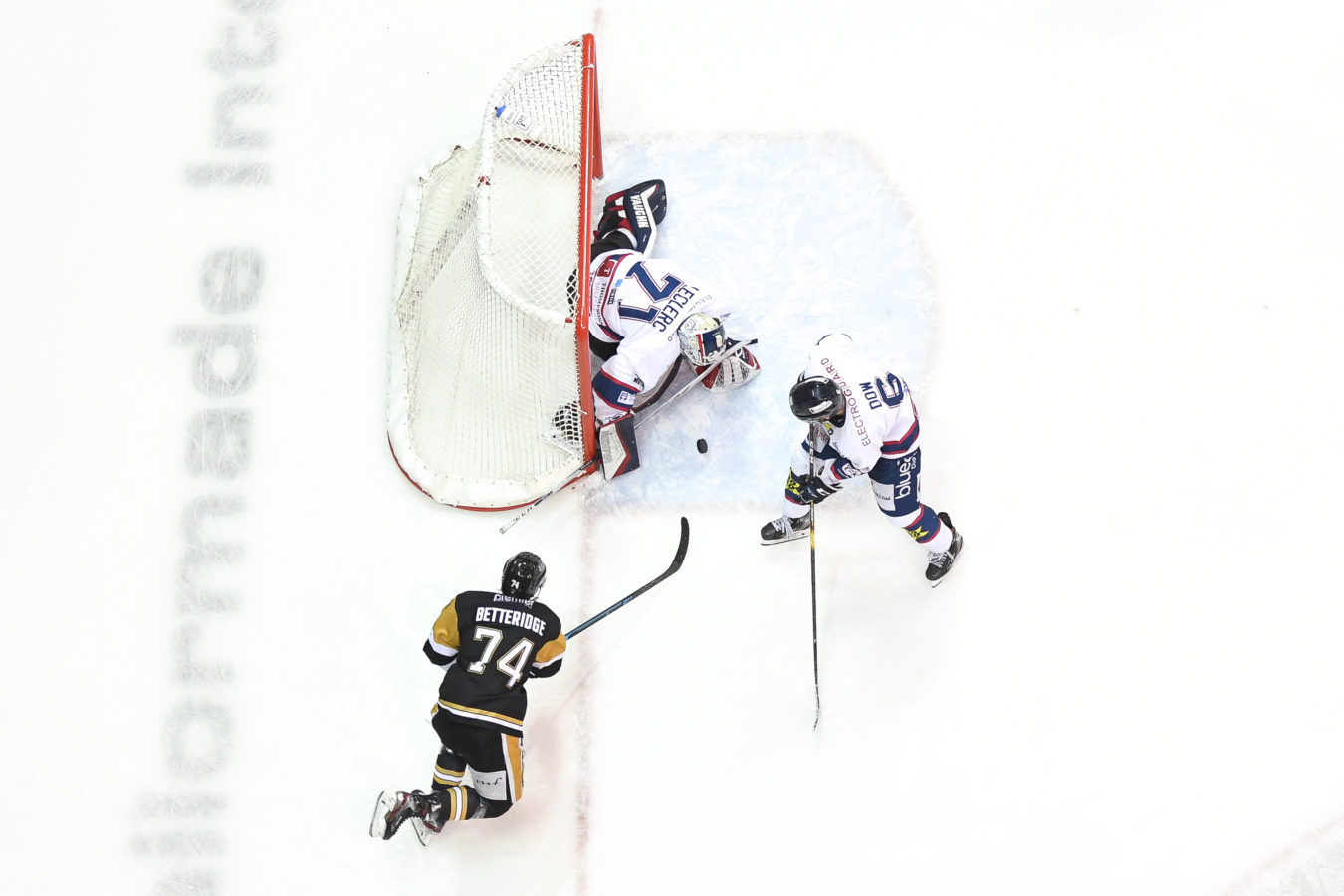 The Kitmart Dundee Stars were in Nottingham and looking to stop the creation of a losing streak as they tried to find a way to win their first game at the Motorpoint Arena this season.

After just two  minutes, the Stars had their first chance as Kevin Dufour laid the puck off to Anthony Beauregard but he should have done better with his shot as he drilled his effort straight into the chest of Nottingham goalie, Jackson Whistle.

However, the Panthers quickly pinned Dundee in their own end and pounced on a rebound to start the scoring in the fourth minute.

Danny Fick did all the hard work for Nottingham but he could not beat Dundee netminder, Alex Leclerc with his shot but Dylan Malmquist drove towards the net and was in a perfect position to fire in the rebound.

Panthers defender, Mark Matheson dropped a pass back to Herr and from just inside the left circle, he blasted a shot into the top left corner, but the home team did not stop scoring there as 23 seconds later, they increased their advantage again.

Herr was involved once more as he skated towards the Stars goal with possession before seeing Leclerc deny his attempt but again Malmquist was in the right place to tap in the rebound.

Dundee Head Coach, Omar Pacha had used his timeout after the second goal but there was a delayed reaction to their poor start, as the Tayside team got off the mark after nine minutes.

A quick counter-attack by Dundee saw Drydn Dow burst forward with the puck and he skated into the Nottingham end and fooled Whistle into thinking he would shoot before squaring a pass across to his teammate, Matt Marquardt.

With Dow having done most of the work, the Stars captain just had to apply an easy finish into the gaping goal to make it 3-1 and Marquardt made no mistake.

Although, things looked like they could go a bit pear-shaped for the Stars as defensemen, Jagger Dirk found himself to be the first player in the penalty box after he dislodged his own goal from its pegs in the 15th minute.

However, it was the away team that took advantage of the situation as Colton Kroeker hit the Panthers with another fast counter-attack and he got past everyone and was one-on-one with the goalie.

The Canadian rookie coolly dispatched the puck into the roof of the net to put Dundee within just one goal after 14 minutes of play but the shorthanded goal was reviewed as it went in and out of the net in seconds, yet it was short check as the referees clearly saw the puck cross the goal line upon review.

Pacha’s men killed of Dirk’s penalty and another before the first break but when they came back out for the second period, they made a completely different start this time.

The Stars were the team that had more possession and control of the play in the opening minutes, as Leclerc hardly saw any action for the first half of the middle session.

The Scottish side could not capitalise on their first two powerplays of the night and during their man advantage, the Panthers put the puck in the net again but a delayed whistle just before the goal meant that it would not count.

However, the Stars were able to tie the game up minutes later as Jagger Dirk deflected the shot of Craig Gans up and into the top left corner in the 37th minute.

The two teams were back even going into the third period but Dundee appeared to be in a lot of danger as the Panthers marksmen, Herr powered across the face of the Stars net and it looked like he would get right around Leclerc but the Stars shot-stopper came up with another big save to keep it out.

The Tayside team were still counter-attacking when they could catch a break from the Panthers pressure but the home team went back in front as an lucky bounce helped the puck fall straight to Robert Lachowicz.

He then backhanded the puck across to Julian Talbot, who quickly sent the puck past a scrambling Leclerc in the 55th minute to make it 4-3.

Dundee quickly pushed for another equaliser and were gifted a late powerplay as Guillaume Lepine was punished for a high-sticking foul in the 57th minute.

Once again, Tim Wallace’s men could not protect their lead as Dufour jammed home a loose puck from just inches in front of the Nottingham goal and he tied the score again in the 58th minute.

The pair of teams were still even after 60 minutes, so overtime was required but despite a few chances for each side, they still could not be separated.

Leclerc came up with some big saves during extra time and a crucial block by Dundee’s Matt Carter allowed Dow to breakaway down the ice but the opportunity was scarpered by the stick of Whistle as he poked away the danger.

In the shootout, both opening shooters, Brett Perlini and Beauregard failed to score but in the second round after Herr was denied, Marquardt gave an advantage to the Stars.

Brian Connelly was then the first Panther to beat Leclerc but Carter responded with another goal to hold Dundee’s lead before Jacob Hansen found another way past the Stars goalie.

However, Dundee’s lead slipped away as Dufour got the puck past Whistle but it stopped against the outside of the post.

Then Talbot quickly slung a shot under Leclerc to put the home team in the driving seat before Whistle denied Dow to give the English outfit the win and the extra point.

The Stars claimed their first point of the season against the Panthers and will face the Guildford Flames next as their English road trip continues on Sunday.