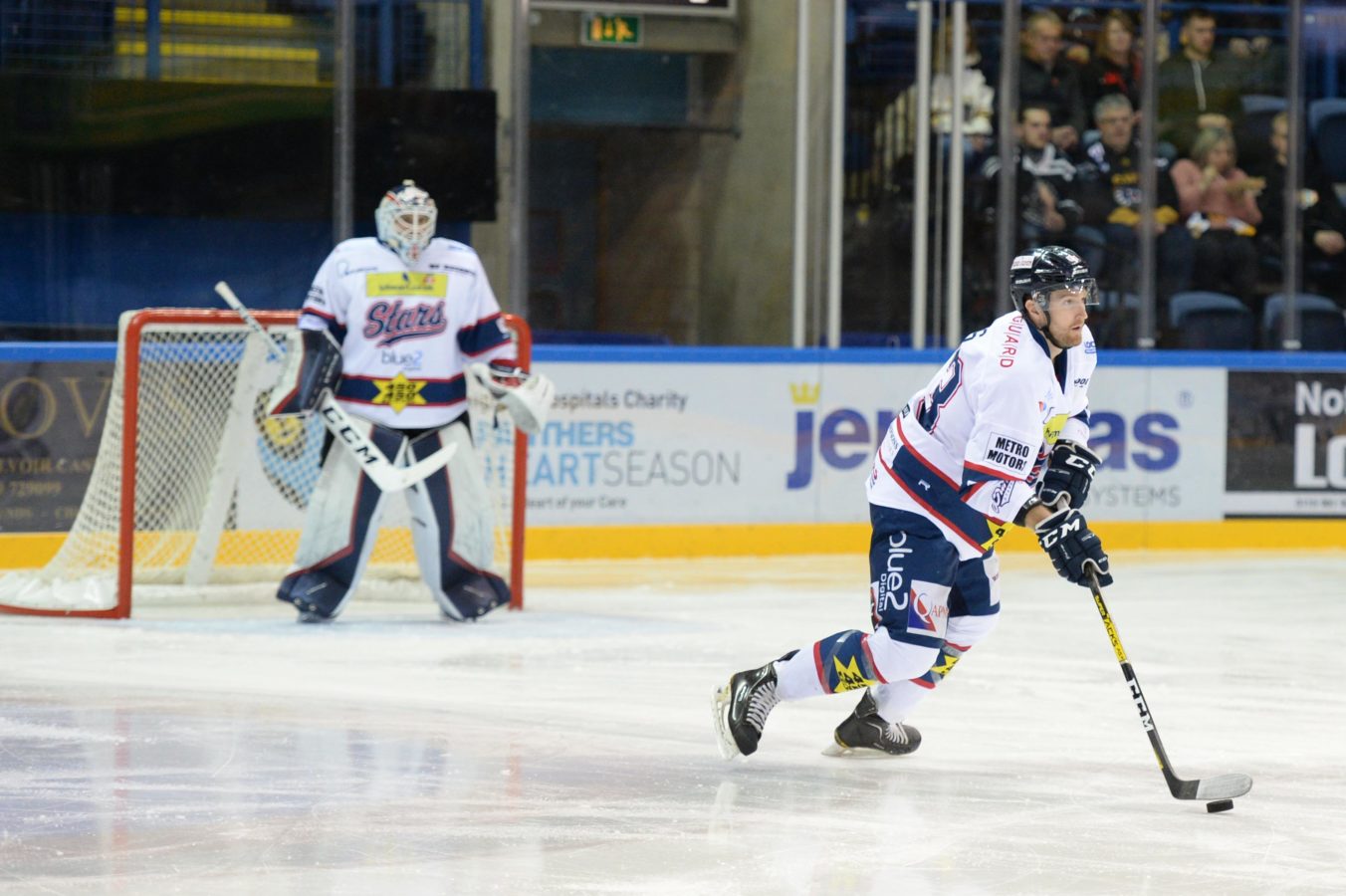 The Kitmart Dundee Stars found themselves in early penalty trouble in Nottingham as defenders, Craig Gans and Brett Stovin both picked up minor penalties but the Tayside team made it through both powerplays without conceding.

However, just seconds after Stovin stepped back on the ice, Adam Deutsch turned in the opener in the ninth minute.

Jon Rheault’s effort was stopped by Dundee netminder, Alex Leclerc but the rebound came out to Deutsch and he was able to shoot the puck past a bunch of scrambling bodies.

The home team then picked up a penalty of their own as Jacob Hansen was punished for a boarding foul but he was only in the sin bin for 29 seconds as Anthony Beauregard batted down a rebound out of mid-air and slung the puck into the bottom left corner on 11 minutes.

Dundee again faced more time on the penalty kill as forwards, Egils Kalns and Matt Marquardt both sat for two minutes each and despite having a two-man advantage for a brief time, Nottingham were again unsuccessful on the powerplay.

Although, the Panthers nicked a late lead in the final minute of the first period, as Mark Matheson sent a pass wide of goal but straight to the stick of Justin Talbot and he had a wide open part of the net to shoot at and restore the home side’s lead with just 35 seconds left to play.

Tim Wallace’s men swiftly added to their lead in the second session as Dylan Malmquist got into the Dundee end ahead of everyone else and simply delayed his shot until the last minute before firing the puck into the top right corner of Leclerc’s goal.

The Panthers had made it 3-1 in just 28 seconds since the game restarted and they extended their lead to 4-1 in the 26th minute.

The fifth goal of the evening was scored by Sam Herr as Hansen’s pass deflected off of Herr’s skate and into the net from right in front of the Stars goal.

The English cloud moved 5-1 ahead after 33 minutes as a turnover in the offensive end allowed Brian Connelly to skate on to a free puck and breakaway from everyone else.

The American then beat the Stars goalie with a low finish and that seemed to put the Panthers out of reach but Dundee finally seemed to find a foot in the game as they created a few more chances and began to defend a bit better.

The third period was mostly calm and quiet as the home team settled in to protect their big lead but that didn’t stop the Stars from pushing to find any sort of answer.

However, Nottingham keeper, Kevin Carr made all the simple saves and his teammates rewarded him with another goal as the Panthers went 6-1 ahead.

With Beauregard in the box for a slashing foul, Hansen provided the finish to a tic-tact-toe move on the powerplay as the puck was worked across the ice and Hansen turned it past Leclerc at the left post.

The final buzzer confirmed the win for Nottingham but the Stars will get their chance to avenge the result the result tomorrow night.