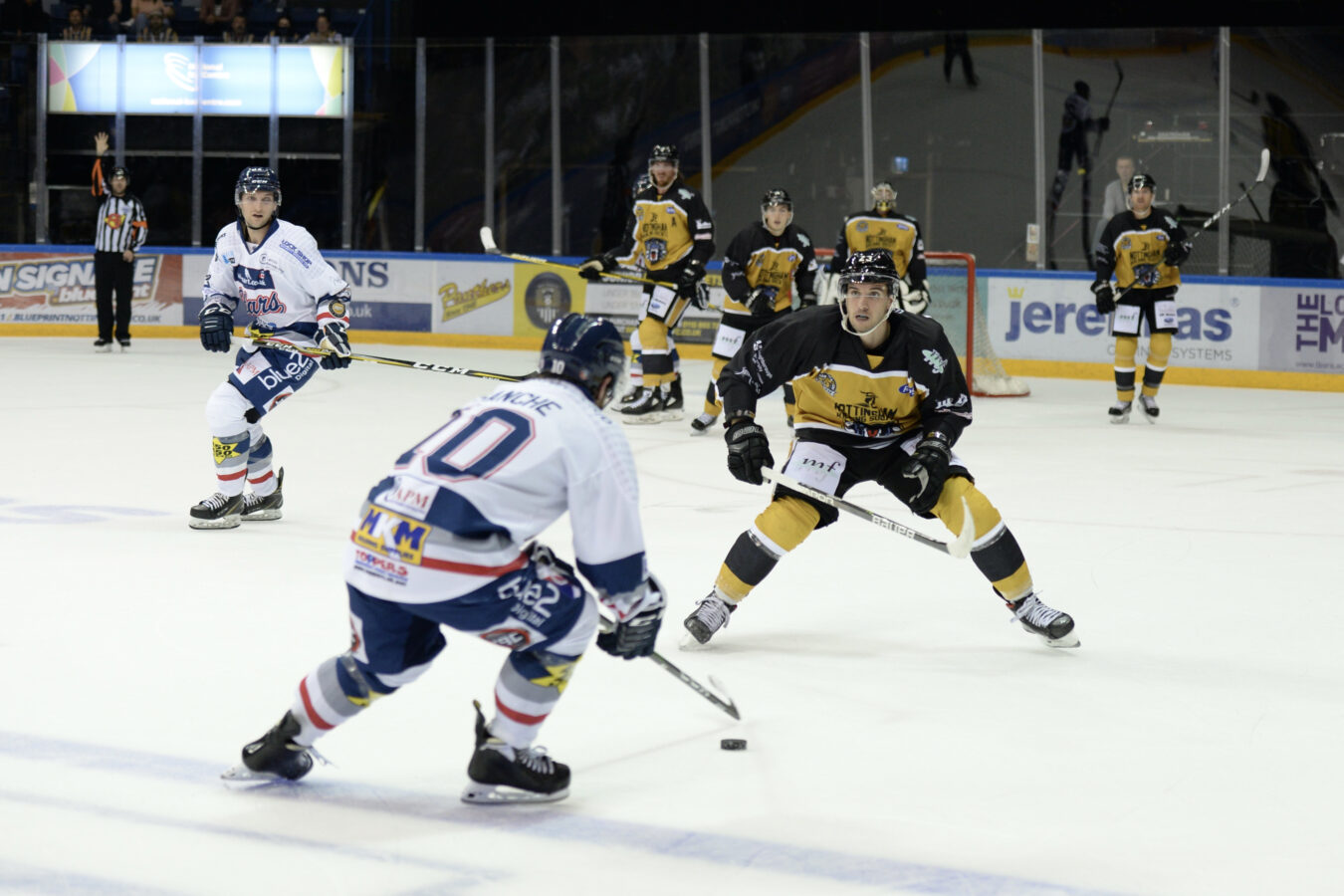 The Kitmart Dundee Stars began their regular season in Nottingham on Sunday evening and they were hungry for a win after being starved of points in Saturday night’s Challenge Cup Group A match.

The game started off with gloves being dropped as Dundee’s Kyle Haas went toe-to-toe with Nottingham’s Joshua Tetlow in the first minute.

After the pair had fired up the crowd and served their five minute majors, the game began to flow back and forth with chances for both sides.

The first clear cut chance fell for Massimo Carozza of the Panthers but his low shot was easily denied by the Stars netminder, Adam Morrison.

Neither team was then able to settle into their gameplan as the penalties started to come and did not stop.

Both sides were punished by the referees Steve Brown and Andy Dalton, with the pair dishing out six minor penalties in the first period, however neither side could punish the other with their numerous man advantages.

The biggest call of the opening 20 minutes went against Dundee, as Philippe Sanche delivered a huge hit on a Carozza and due to a cut on the Panthers player’s face, Sanche was assessed the standard four minute, double minor for accidental high-sticks.

There continued to be scoring chances for either side and both Morrison and Kevin Carr in the Nottingham goal proved the difference, as a feisty first period ended goalless.

Dundee made a solid start to the middle session by killing off an overlapping powerplay but a few moments later, the home side broke the deadlock.

In the 25th minute, Oliver Betteridge made a move down the left flank and with no passing options, he chose to fire a quick wrist shot into the top right corner of Morrison’s net.

After getting ahead, Tim Wallace’s men tightened up their defensive game and despite taking a few more penalties, they held onto their narrow lead.

In the late part of the second frame, the Panthers were starting to put Dundee under real pressure but the Taysiders survived and were able to find a few chances for themselves.

Omar Pacha’s side got the gift they needed as two late penalties in the second stanza, meant they would begin the third period with a man advantage.

However, the Stars powerplay unit was unable to find a way past the Panthers keeper, but down the other end of the ice, Morrison made a sprawling save to cross his goal and deny Taylor Doherty.

With a big save to keep the score at 1-0, Dundee were fired up and that resulted in Sanche making a break down the left wing before beating Carr with a low shot from distance to tie the game in the 52nd minute.

Although, the Stars celebrations were short lived as Robert Baillargeon whacked home a loose rebound one minute later to restore Nottingham’s lead.

Dundee were not left deflated and straight away got back on the hunt for a second equaliser, with Charlie Combs and Connor Sills continuing to show their danger in front of goal.

Eventually, it all came down to the final minute and after using a timeout and swapping his goaltender for an extra attacker, Omar Pacha’s side went all out for their vital goal and they came so close.

With just 15 seconds left to play, Carr made a crucial save to deny Combs, as he managed to save a sneaky shot with a pile of bodies in front of him.

The Panthers quickly regained possession and ran down the final few seconds to secure a victory in their first game of the new season and to hand the Stars their first pointless weekend.

There will be no rest for Dundee as they face a triple header of Challenge Cup games next weekend, with two ties against Belfast Giants and a trip to Fife Flyers.