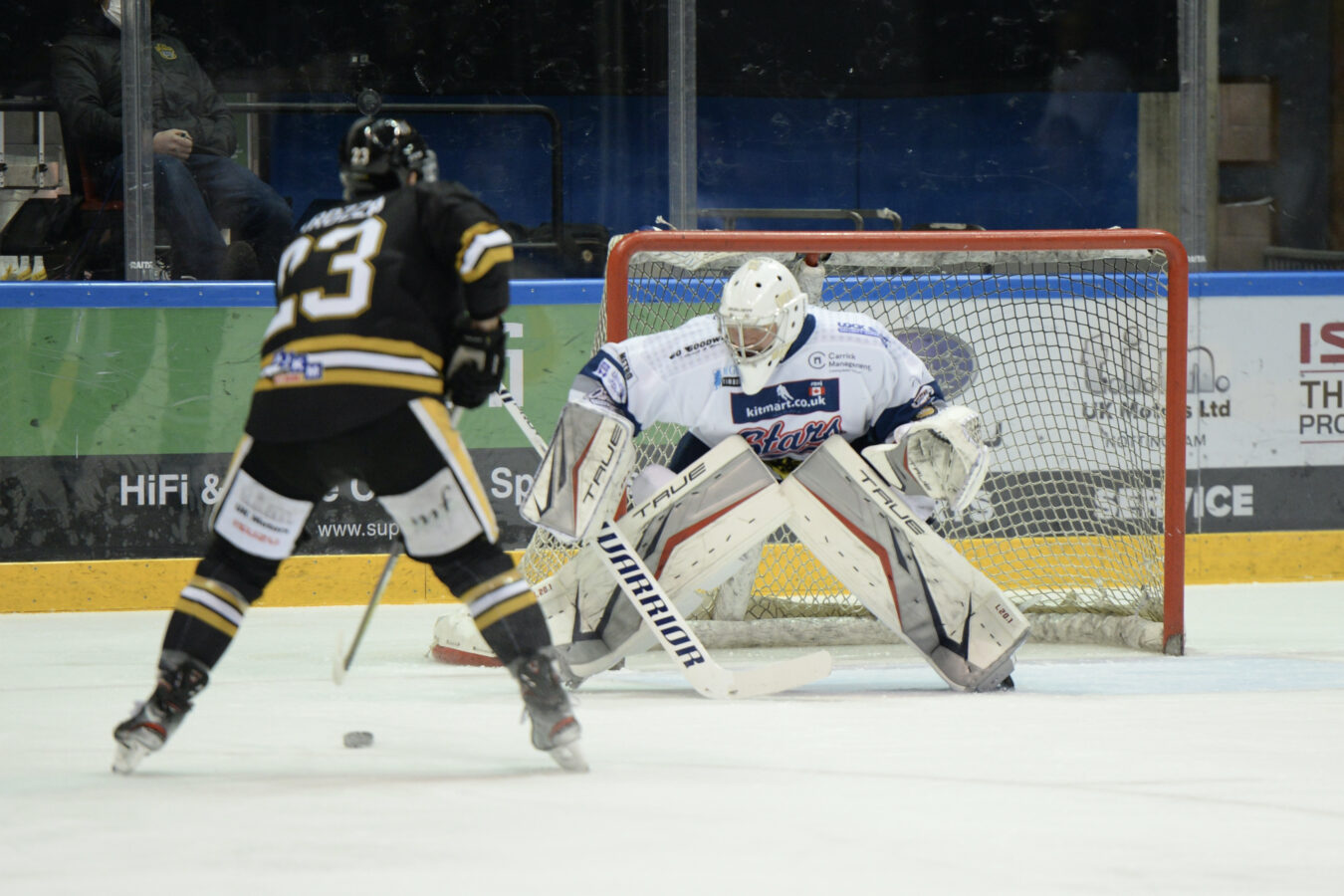 The Kitmart Dundee Stars were aiming to bounce back from defeat with a win on the road in Nottingham on Sunday evening and were trying to clinch their first win in the Motorpoint Arena this season.

The home side had the better start of the two teams as they quickly put the Stars on the backfoot and opened the scoring after just three minutes.

The Panthers rushed forward into the Dundee end and with defenseman, Markus Kankaanperä without his stick, Matthew Lane was left unimpeded to finish past Adam Morrison in the Stars goal.

The Nottinghamshire club were then straight back on the attack and minutes later found a second goal, with Lane netting once again, as he and Massimo Carozza played a one-two to open up space past the Dundee goalie.

However, the Stars soon answered back as they took advantage of a delayed penalty against Nottingham’s Brady Norrish and Spencer Dorowicz redirected the shot of Kris Inglis past Kevin Carr on 10 minutes.

Omar Pacha’s men then revved up their performance and hit back at the home team hard, with their efforts soon culminating in an equaliser.

Inside the final two minutes of the first period, Dorowicz would also secure his brace after he took a loose puck away from the group of searching defenders and beat Carr with a backhanded effort from the right side of the net.

Although, Dundee’s hard work was quickly undone just 11 seconds later as the Panthers went straight on to the attack, with Christophe Boivin forcing a save from Morrison.

Then unluckily for the Scottish outfit, the rebound sprung straight out to Jeremy Welsh who hit the puck first-time straight back at goal and it squeezed its way through the legs of the Canadian keeper, to restore the home team’s lead.

Then in the second period, Dundee continued to put the Panthers under heavy pressure and search for another equaliser, but they failed to breakdown the Nottingham defence and when they did, Carr would be there, ready to deny them.

The visitors then suffered another setback as their former player, Jordan Kelsall increased the Panthers lead to two-goals once again.

The young Brit was the trailing attacker for Nottingham and when the puck switched sides and came to Kelsall he quickly chose his spot and sent it high past the sliding Morrison, on 26 minutes.

There would be no more scoring in the middle period and the Stars had kept the Panthers within touching distance heading into the third.

Although, the final session was a quiet affair and Nottingham came out and shutdown the game with some clean and tight defensive play.

The next goal would then not come until the final two minutes, when Christophe Boivin fired into an empty net after the Stars gambled and swapped their netminder for an extra attacker.

The final buzzer sounded to end a forgettable weekend for the Stars as they slipped back ninth place in the Elite League standings.

Next up for Omar Pacha’s men are a visit to Sheffield Steelers next Saturday before they host Guildford Flames on Sunday evening.