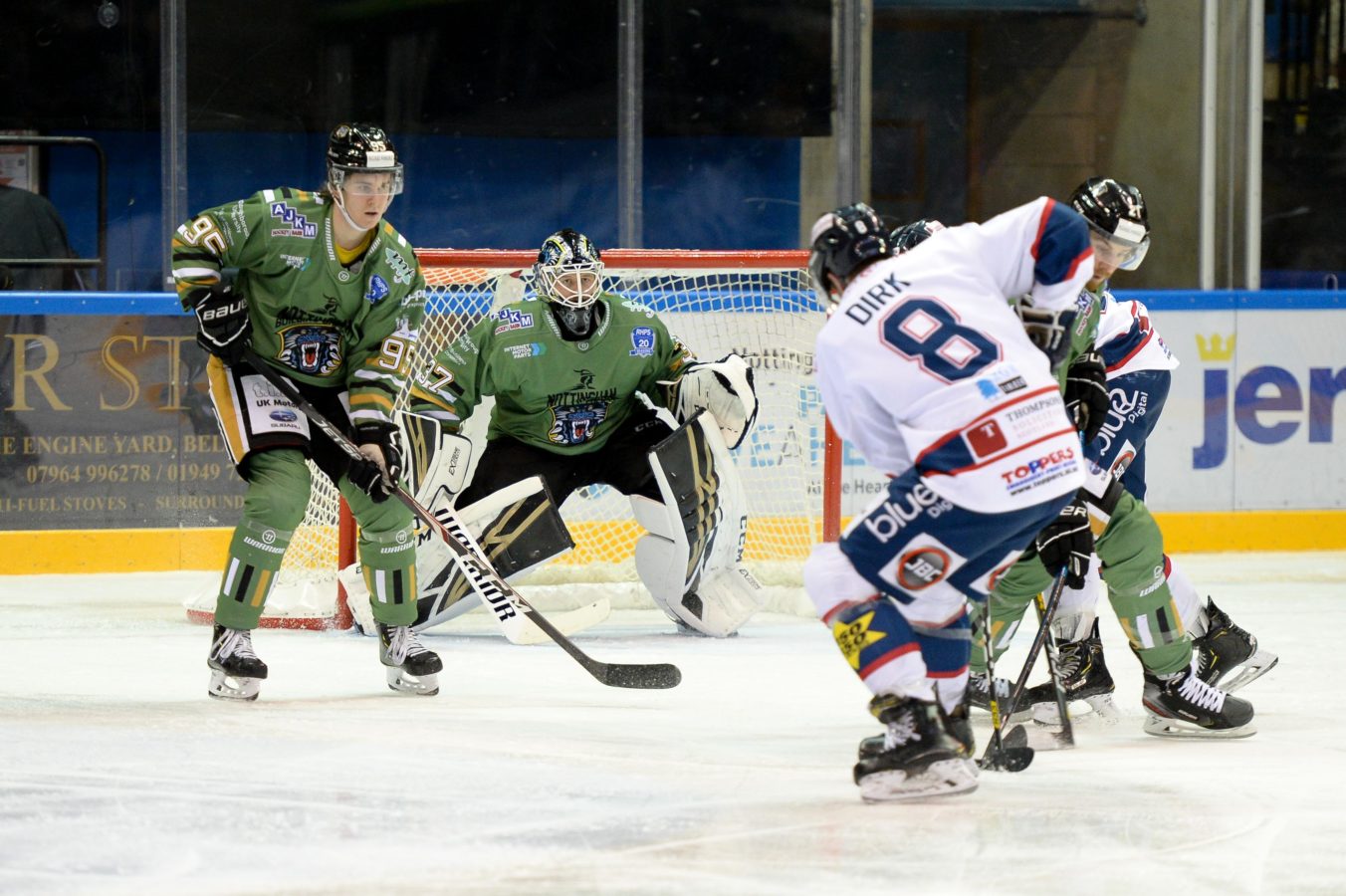 The Kitmart Dundee Stars fought hard on the road but a lucky bounce undone all their hard work as the Nottingham Panthers capitalised on some puck luck.

Right from the off, the Stars were on the attack and they created two quick scoring opportunities that saw Elgin Pearce and Drydn Dow denied from point blank range.

However, despite their quick start, Nottingham would open the scoring inside five minutes as Brett Bulmer sent Dundee netminder, Alex Leclerc the wrong way to give him a wide-open net to slide the puck into.

The Stars were then handed their chance to tie the game up within minutes as Robert Lachowicz headed for the Panthers penalty box for a hooking foul in the eighth minute.

Tim Wallace’s side defended well to protect their lead and once the penalty was over, the English side forced Leclerc into making a vital save.

The rest of the opening period saw both teams go back and forth trying to break each other’s defences down but neither side could add to the scoresheet before the first break.

Although, the Scottish side came out firing again and drew level just 95 seconds into the second period.

Dundee’s Kevin Dufour skated the length of the ice and rounded the Nottingham net before shooting but Kevin Carr got down at his left post to make the initial save.

However, the rebound landed right at the back post, where Justin Maylan was waiting and he quickly tapped it in to tie the game.

The home team responded well after conceding and would retake the lead after 28 minutes as the puck was left behind following a face-off and Panthers’ Sam Herr was the first to notice.

Herr claimed the puck and moved towards the goal line and as he edged towards the Dundee goal from a narrow angle, he delayed his shot until he last moment then roofed a backhanded effort into the top of the net.

There was then a powerplay chance for Nottingham late in the second session as Pearce was boxed on a slashing call in the 36th minute but Omar Pacha’s men prevented the Panthers from extending their lead before the final intermission.

The Tayside team again started off on the front foot as they went at the Panthers early in the third period and their hard work was rewarded with another game-tying goal.

This time it was Anthony Beauregard who found the net as he redirected a pass from Pearce past Carr on 48 minutes.

George Golovkovs fired a shot that was well off target but it hit the glass behind the Dundee goal and landed back out in front of the net where Jacob Hansen could easily tap it in as Leclerc lost sight of the puck.

Dundee pushed hard for a third equaliser but it would not come before Hansen bagged his second after 51 minutes.

The Panthers marksmen was unmarked and received a pass in the middle of the Stars zone, which he took forward and quickly sent a low shot under a dropping Leclerc.

Dundonian, Jordan Cownie had the best chance to get the Stars back in the game as he was played in on goal with four minutes remaining but the Nottingham goalie stood firm to deny him.

Pacha gambled in the final two minutes and sent out an extra attacker in the place of Leclerc but the home side were constantly forcing turnovers and with just over a minute left on the clock, Brett Perlini confirmed the result.

He picked out the vacant Dundee goal from the halfway line to give the final score of 5-2 to the Panthers.

The Stars now have just two days before their next fixture as they visit Glasgow Clan on Saturday before they host Cardiff Devils on Sunday evening.