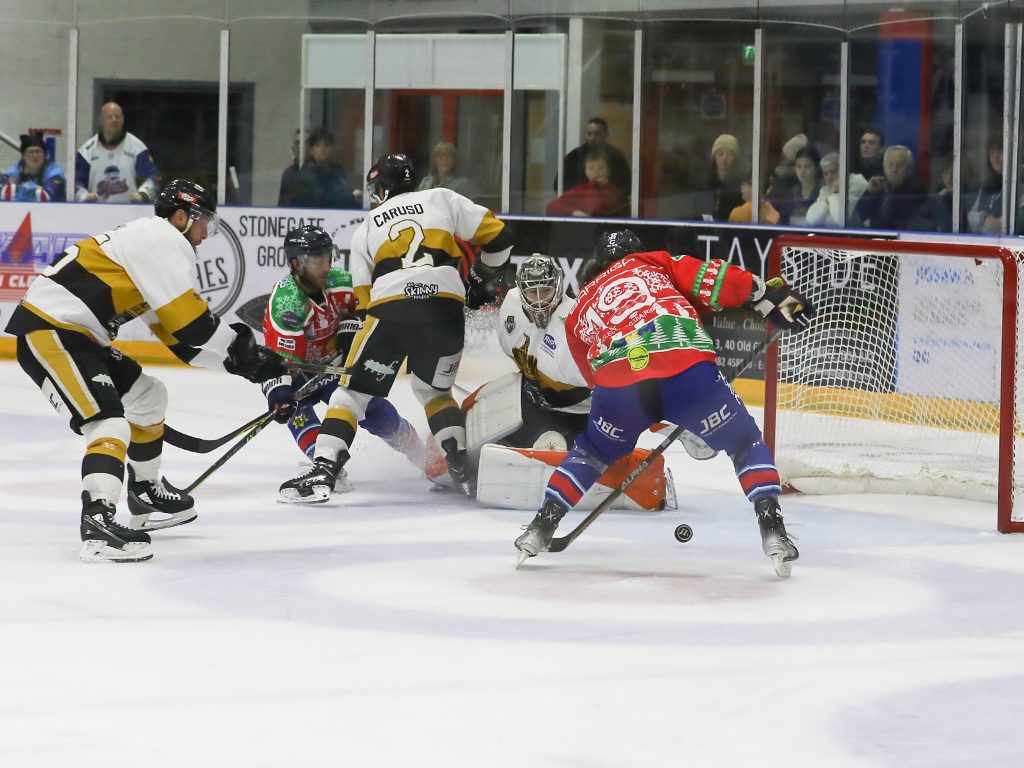 The Trade-Mart Dundee Stars were out to start the festive period with a fourth straight win on home ice as they adorned their Christmas Jumper jerseys for the annual Teddy Toss Game against Nottingham Panthers, on Saturday night.

The Stars had to face the Panthers without injured duo, Ben Brown and Hugo Reinhardt, but also Jonathan McBean who fulfilled his two-way contract with Solway Sharks and despite an action-packed start that saw both teams get on the attack early, the Panthers would take the first lead of the night.

After only four minutes of play, a blocked shot fell perfectly in front of Luke Ferrara and the Nottingham forward was able to release his shot quickly before the Stars defence had re-adjusted and it beat Anton Svensson up high.

Dundee did not allow the early goal to knock them off their gameplan and continued to take a physical approach to the Panthers who were playing their second game in as many nights.

Eventually, the home side found a breakthrough after testing Jack Berry with a number of difficult shots and the American would be unable to stop Ben Sokay from dragging the puck all the way across goal, before firing in at the right post and beginning the Teddy Toss. 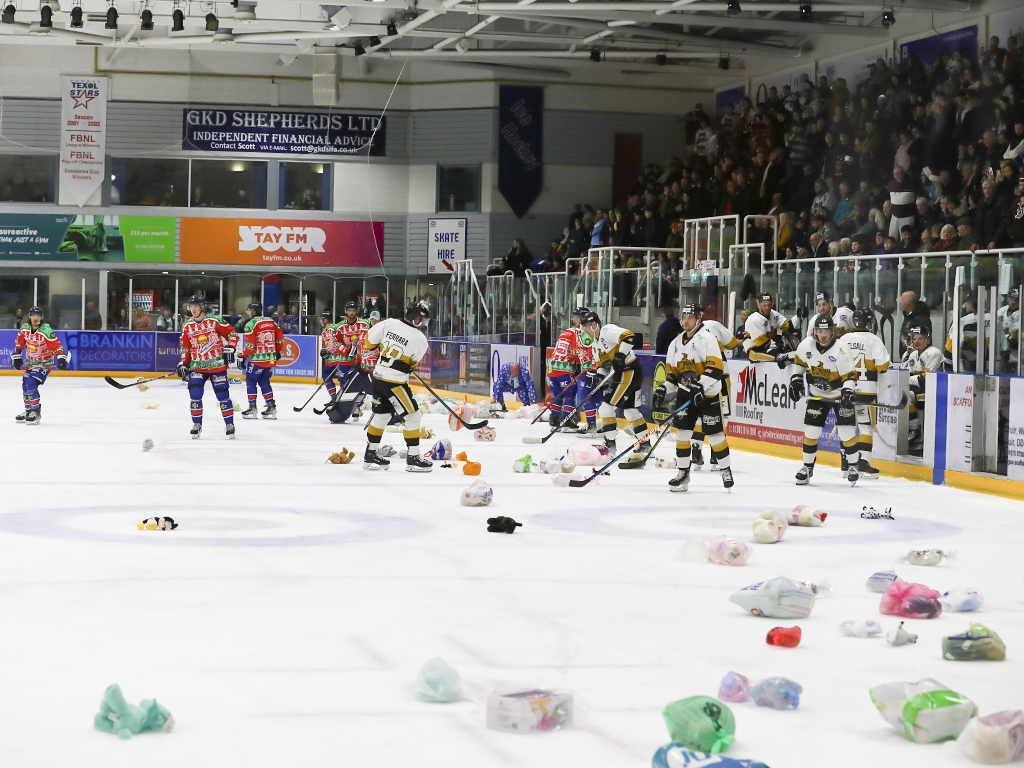 Although, the Stars would not be level for long and just 27 seconds later, Jack Hopkins saw his effort fly through a pile of bodies and into the back of the Dundee net.

Corey Neilson side would then hold the lead for nearly five minutes, until a pair of unnecessary fouls cost them their advantage as Former Stars captain, Fabrizio Ricci was punished for holding and Stephen Anderson boxed just seconds later for roughing.

That allowed the Stars to convert on a five-on-three powerplay as Romans Semjonovs was waiting at the back post to blast home a cross-goal pass from Philippe Sanche and his effort beat the slow to move Berry with ease, in the 18th minute.

The two teams were still tied entering the second but the English club would again find a way to get in front and it took only two minutes for the puck to end up in the Dundee net.

Ricci turned playmaker as he sent a fast pass across the Stars goal and the puck would deflect up off Svensson’s stick and hit into Anderson, who swiftly batted it out of mid-air, to restore the Panthers lead.

Seven minutes later, Jeff Mason’s men responded again and Sanche would have the final touch, as he lifted a loose rebound over Berry to make it 3-3, just before the halfway mark. 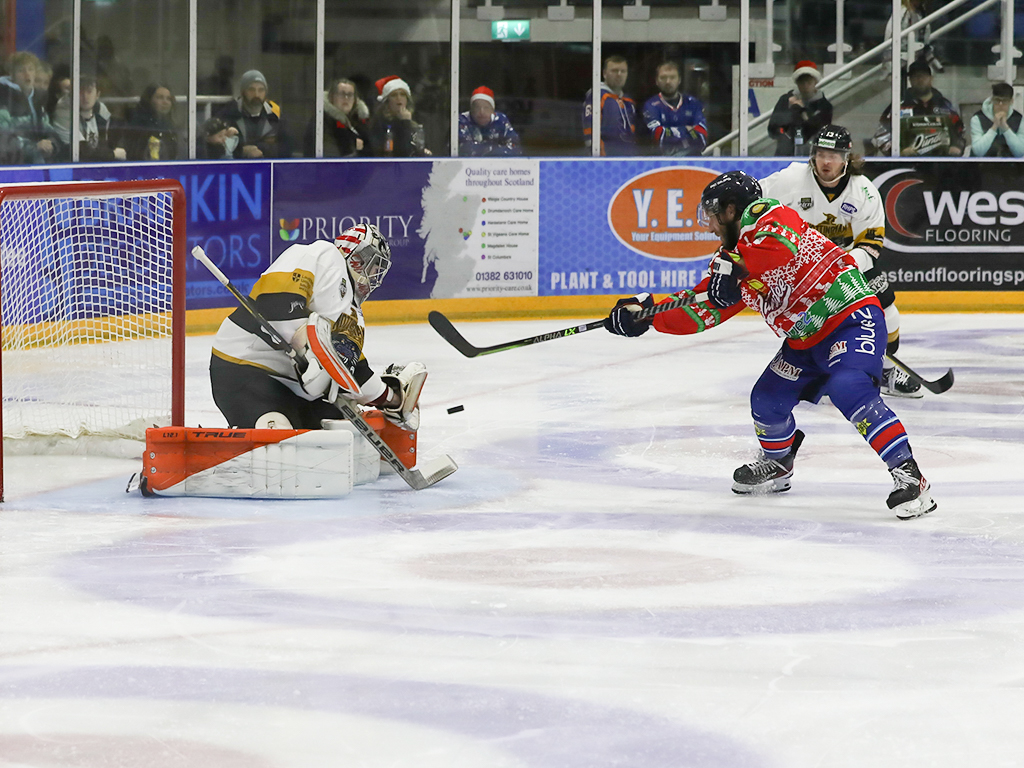 The Tayside team then got their first lead of the night when Elijiah Barriga was left unmarked at the back post and able to finish off a loose puck in the 36th minute.

However, they would surrender their advantage just two minutes later as a powerplay goal from Adam Brady made it 4-4 heading into the final period, but there would be few chances for either side to win the match, as Sanche struck the post for Dundee and the Panthers wasted a powerplay chance inside the final minutes of regulation.

Overtime would decide a winner and it would take exactly two minutes for the game-winning-goal to be scored and after short spells of pressure at either end, J.C. Brassard would beat Svensson with a rising shot to win the extra point for Nottingham.

The Stars claimed one point but saw their winning run at home come to an end and now they go on the road for Sunday’s league match against Cardiff Devils. 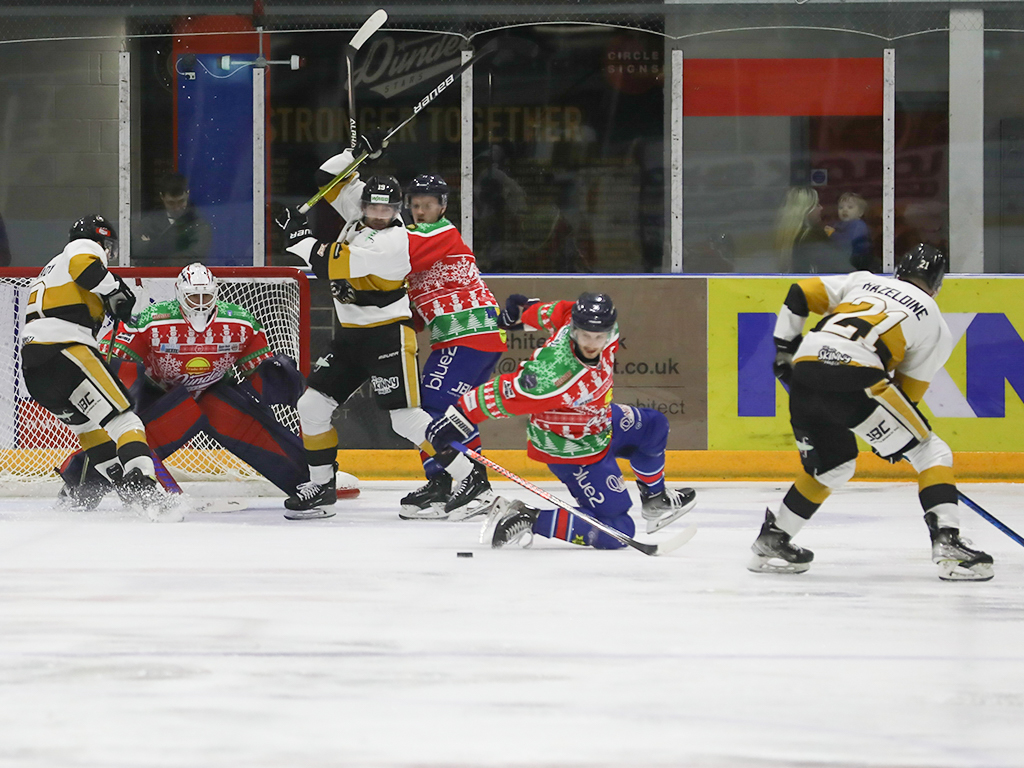