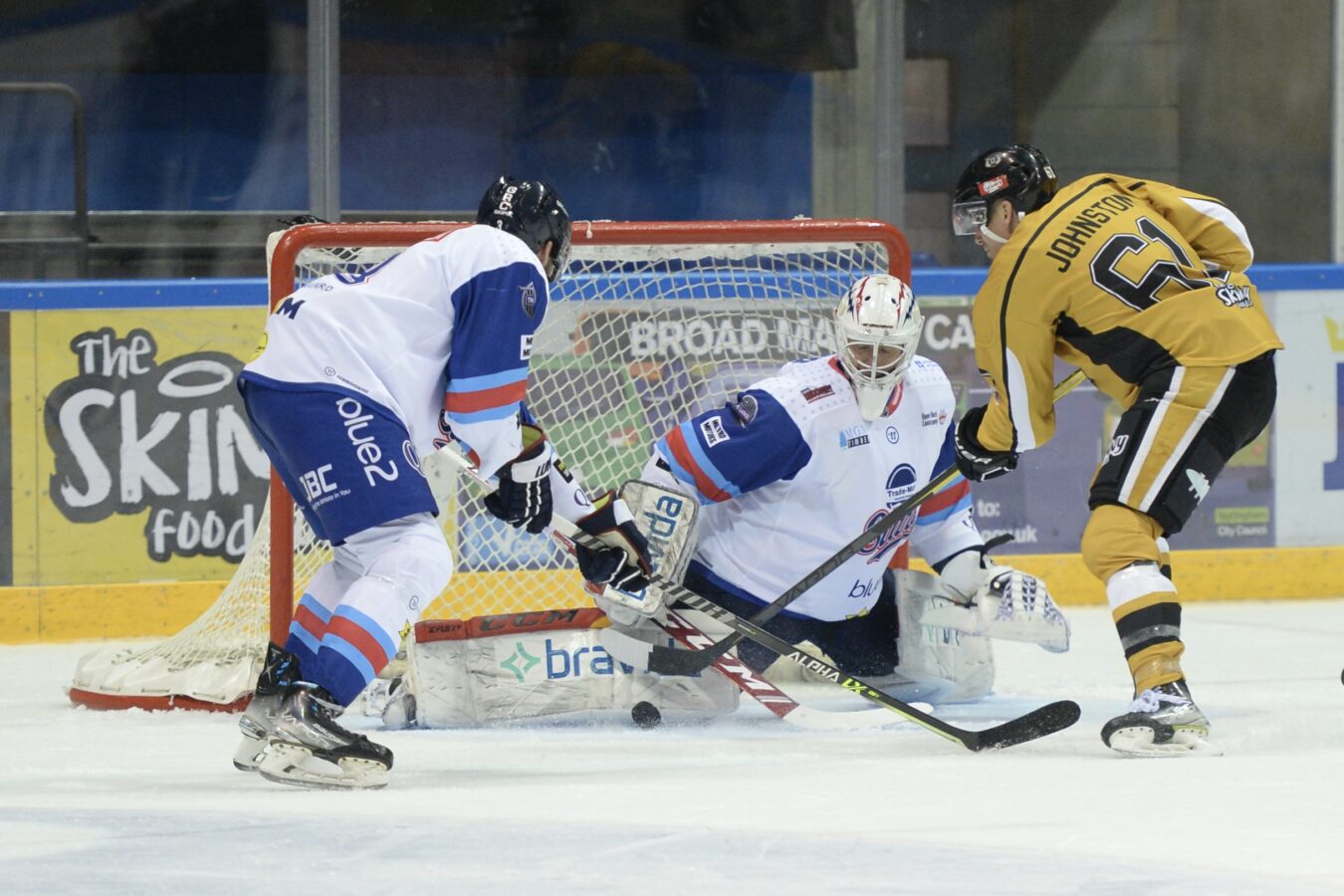 The Trade-Mart Dundee Stars went on the road to visit Nottingham Panthers for the first time this season on Friday night, as they made their first trip south of the border with the hopes of securing their first regular season victory.

The Stars arrived in Nottingham without their three current injured players, but had reinforcements with both Ben Brown and Jonathan McBean in the line-up.

However, with only 90 seconds gone off the clock, the Panthers got ahead as a well-timed pass from Brett Welychka evaded the sliding Dundee defenseman and found Adam Brady at the back post, who turned the puck past Anton Svensson, to open the scoring.

The Stars then had to kill off the first penalty of the night and did so successfully, but after wasting a chance of their own on the powerplay, the home side doubled their lead on 13 minutes.

A quick pass sent around the back boards caught the Dundee keeper out as he could not reach it before it left the trapezoid and Nottingham’s Craig Puffer quickly claimed possession and sent a pass out in front of goal, where Jeremy Welsh skated onto the pass and slipped the puck past Svensson.

Gary Graham’s men then made it a 3-0 game in the 17th minute, as Welychka deflected Adam Brady’s pass past Svensson to convert a powerplay, as Dundee’s Erik Näslund served a minor penalty for boarding.

The Scottish side were struggling to break down the Panthers and create their own spells of pressure and after the first period, they still trailed by three goals, and things did not get better at the start of the second.

Within four minutes of the game resuming, Nottingham added a fourth goal and it all came from a selfless play from Andrew Johnson as he declined to shoot the puck and instead tapped the puck back across goal for teammate Tanner Sorenson to finish off.

The rest of the middle session saw the two teams battle hard to get the next goal, but neither side would find the breakthrough before the second intermission, despite a few more powerplay chances.

In the final stanza, each team continued to waste opportunities on the powerplay, but the Panthers soon found a fifth goal in 50th minute, as Craig Puffer’s redirected effort landed in the back of the Star net,

However, Dundee finally found a breakthrough inside 54 minutes and ended Dubeau’s hopes of a clean sheet, when Stars captain, Fabrizio Ricci raced through on goal and slotted the puck through the Nottingham keeper’s five-hole.

Following the restart, there would be a scuffle between Duggie Lagrone and Dundee’s Philippe Sanche, which would turn into the pair exchanging blows whilst on the ice.

The aftermath of the fight saw Sanche penalised for five minutes, while Lagrone recieved a total of 17 penalty minutes, with the standard five for fighting on top of a two-minute minor and 10-minute misconduct penalty for instigating the scrap.

With the Stars on the powerplay, Elijiah Barriga then cut the lead to three-goals as he was on hand to tap in the rebound of Devon Daniel’s saved effort, on 56 minutes.

Although, the home team would score the last goal of the night, as Welsh picked out the top right corner for his brace, inside the final two-minutes, to give the Panthers a 6-2 victory.

The Stars now face a quick turnaround for tomorrow’s 7pm start at home against Manchester Storm, where they look to secure those lucrative first points in the league table.