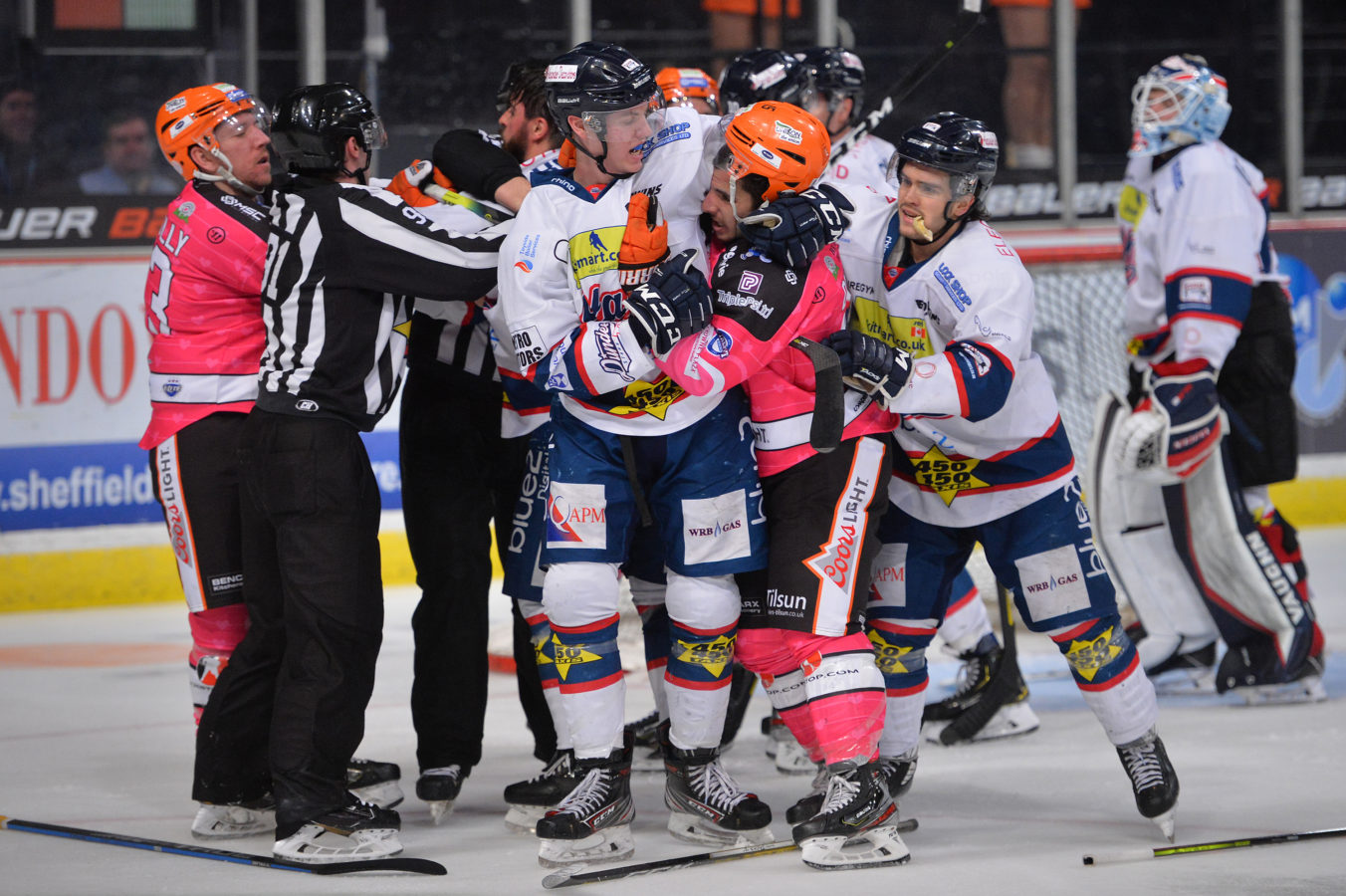 The Kitmart Dundee Stars were in Yorkshire with the goal of stealing two points from the current Elite League leaders and they nearly had an early lead on the road as Kevin Dufour and Anthony Beauregard combined after 10 seconds but Beauregard’s effort was blocked.

Then straight away, Sheffield had a chance at the other end as Anthony DeLuca skated the puck forward but Dundee netminder, Alex Leclerc came up with a big double save to keep the home side out.

The Stars then put the Steelers keeper, Tomas Duba under some pressure for a few minutes as they tested him with a number of shots from different angles but the game still remained scoreless.

However, Aaron Fox’s men were handed the first powerplay chance of the night when Dundee’s Matt Carter was punished for a hooking foul in the sixth minute and that allowed Marc-Olivier Vallerand to fire Sheffield into the lead.

Aaron Brocklehurst squared a pass across the top of the Dundee end and Vallerand was waiting on the right flank to hit the puck first-time and his shot beat Leclerc up high on his near post in the seventh minute.

The next scoring opportunity fell to the Steelers’ Tanner Eberle, as he forced a turnover in his own end to create a breakaway but once he was in front of Leclerc, the Stars goalie stuck with him all the way and made a firm stop with his right leg pad to deny the Canadian.

DeLuca had another opportunity in the 11th minute and again he failed to score, this time he beat Leclerc but his shot hit the wrong side of the netting and raced away around the boards.

Omar Pacha’s men tied the game up on 15 minutes as the captain, Matt Marquardt raced forward to keep the puck in the home teams zone and he got there just in time to prevent the offside, before releasing a low wrist shot that beat Duba to his right.

There were a few more chances for each side but neither club would have the lead going into the first break.

However, the Stars came out for the second period with a good tempo and quickly got themselves ahead as Jordan Cownie went forward down the left wing and delayed his pass until the last second and sent one across to the chasing Egils Kalns.

The Latvian winger got there just in time to turn the puck up into the roof of the net and that put the Tayside team 2-1 ahead on 23 minutes.

Dundee then had to defend for a period of time as Sheffield came at them hard looking for a equaliser but the Scottish side survived the waves of attack before creating more scoring chances as they looked to increase their lead.

Opportunities came to both Carter and Beauregard but Duba came up with two big saves to keep his side trailing by just a goal, although that all changed in the 34th minute as Beauregard netted Dundee’s third of the night.

The Stars were a man down as Jagger Dirk served a two minute penalty for slashing but Dufour and his usual partner created a chance to get forward and found themselves in on goal with just one defender in their way.

Dufour’s first pass was blocked by Marek Troncincky but his second attempt found his line-mate and Beauregard quickly deflected the puck up past the Sheffield netminder to make it 3-1.

The road team continued their excellent performance and killed off the remaining time on Dirk’s penalty but again the home side were searching for an answer and Vallerand nearly gave them one.

The Steelers had a two-on-one situation with Brendan Connolly and the goalscorer, Vallerend breaking into the Dundee zone and Connolly spun to avoid the sliding defender before he passed possession over to his teammate.

However, Sheffield’s marksmen failed to hit the target and they were put straight back under pressure by Dundee.

Stars forward, Brett Stovin was the next to be denied as he had a clear path to goal before the puck slipped away from his stick at the last second.

There had been a physical aspect to the match all night and after a clean hit by Dundee blueliner, Shawn Boutin on Connolly, the Steelers centerman retaliated with a late hit after the whistle on Boutin to earn himself a two minute roughing minor.

The Stars went on the powerplay in the 39th minute and just five seconds into their man advantage, the puck was in the net.

Carter had won possession for Dundee and the puck came back to Dirk, who quickly sent a shot in that was saved by Duba, however the rebound was spilled and that allowed Carter to tuck home the Stars fourth goal.

The visitors started and ended the middle period on a high but they needed a big third period to fend off a comeback from the league leaders.

Early on in the final stanza, there was a three-on-one chance for Dundee but Dufour, the puck carrier,  kept possession and decided to shoot, only for Duba to deny him.

The play then went straight up the ice and Leclerc was forced to make a save on DeLuca to protect his team’s three-goal cushion.

Aaron Fox’s side looked like they would maybe get something as they had numerous chances but Dundee scrambled the danger clear but there was then a slight concern for the Stars as Duncan Speirs was punished for a slashing foul in the 50th minute.

However, Connolly tripped up Dirk and that meant his side forfeited their man advantage but then the home team took a too-many men penalty to put their opponents on the powerplay.

Once back to five skaters, the Stars stopped killing the clock and got forward and quickly added a fifth goal to extend their lead to four goals.

Carter had the puck in the bottom right corner and sent a pass all the way across the face of goal to Colton Kroeker and fired a shot straight back past Duba on 52 minutes.

Although, the Steelers did win a penalty after Dundee’s Reilly O’Connor held DeLuca back when he got in behind the Stars defence in the 57th minute but the Canadian missed the net completely on his free shot.

The Yorkshire outfit pulled one back with less than two minutes to play as Troncinsky rounded the back of the Stars net before flicking a shot from the left flanks and the puck curled in against the far post to reduce the deficit to 5-2.

The final buzzer sounded to hand Dundee their first victory of the year against Sheffield and the club’s and Omar Pacha’s second ever win at the FlyDSA Arena.

With a win in their only game of the weekend, the Stars now have a week to prepare for their next game which is against their arch enemies, Fife Flyers at the Dundee Ice Arena next Saturday.