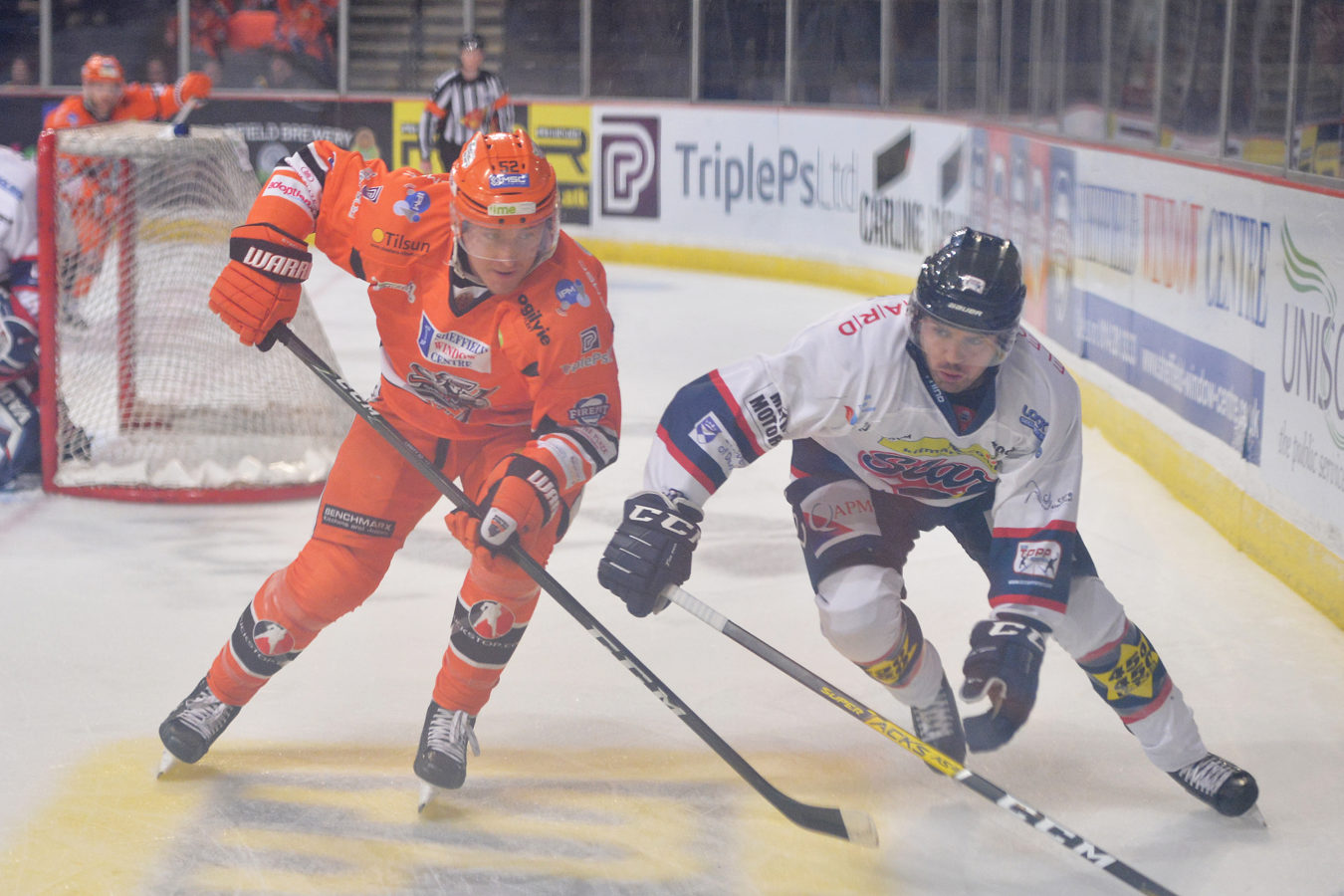 The Kitmart Dundee Stars came up just short in Sheffield as they fell to a 4-2 defeat but a controversial goal decision cost the Stars dearly.

The game opened slowly and both teams were feeling each other out but gradually creating chances.

The scoring could have been opened a few times but both Sheffield’s Tomas Duba and Dundee’s Alex Leclerc stood firm to keep the game in a stalemate.

Dundee’s captain, Matt Marquardt was then penalised for a slashing foul in the 11th minute and that opened the match up.

On the resulting powerplay, Marc-Olivier Vallerand fired a shot into the top left corner from the far-right circle to start the scoring after 11 minutes of play.

Robert Dowd quickly doubled the Steelers lead as he batted in the rebound of Ben O’Connor’s shot a minute later.

However, the goal was reviewed for a high-stick foul as Dowd may have batted the puck in from above crossbar height but after a lot of deliberation the call on the ice stood, much to the Stars coach’s frustration.

Aaron Fox’s men were in their top gear and added a third goal in the 14th minute as Tanner Eberle pulled the puck around a charging Leclerc and tucked it into the Stars net as he was taken down by the Dundee goaltender.

The Stars were given a chance to get off the mark late in the first period as Michael Davies was called for a hooking foul in the 16th minute.

However, Sheffield held onto their three-goal cushion going into the first break.

The second period seen the visitors hit back with an early goal to cut the deficit to 3-1.

Dundee forward, Brett Stovin was on hand to turn in the rebound of Jagger Dirk’s blocked shot in the 22nd minute.

There was then some penalty trouble for both sides but neither team could use any of their man advantages to change the score line.

Stars winger, Elgin Pearce had a chance to make it 3-2 after 36 minutes but his shot from right in front of the Steelers goal was straight into the chest of Duba.

Omar Pacha took his side into the final intermission with a lot of momentum after a period where they came out on top of the home side and controlled the play.

In the third stanza, the Stars were presented with an opportunity to close Sheffield’s lead to one goal as Mikko Kuukka was sent to the box for a slashing foul on 46 minutes.

There were a few chances for Dundee to score with Egils Kalns going close before Pearce converted on the powerplay.

The Canadian forward was in space and picked out by Anthony Beauregard before he released a quick shot that flew past Duba and deflected down off the crossbar.

The Tayside team would only be within one goal of the Steelmen for five minutes as Sheffield restored their two-goal lead after 51 minutes.

The Steelers’ Eric Meland released a fast and low shot that hit the leg of Eberle and that was enough to deflect the puck past Leclerc, making it 4-2.

Dundee failed to take advantage of another powerplay late in the game and after calling a timeout with two minutes left and pulling his goaltender with 33 seconds to go, Pacha pushed his side to get a late goal.

Although, the Steelers held on to claim a 4-2 home win and continued to starve the Stars of a win, both against Sheffield and in the league campaign.

Dundee now face another tough test with a trip to Belfast Giants on Friday night before a home clash with Glasgow Clan on Saturday night, face off 7.00pm. Buy your tickets HERE!