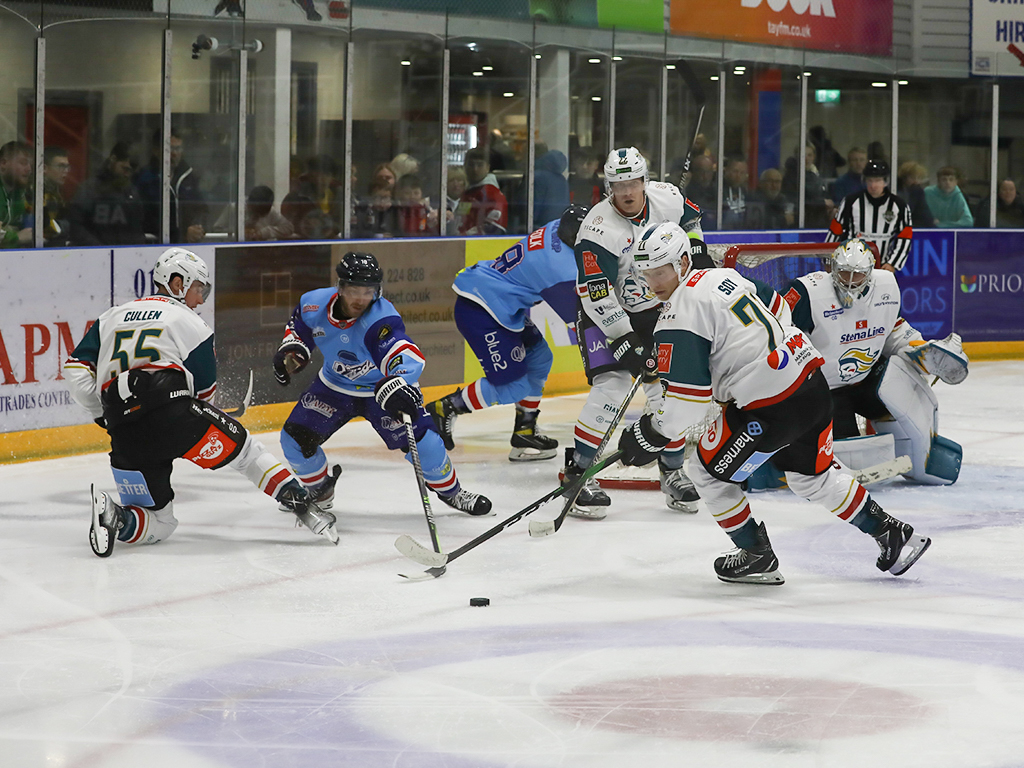 The Trade-Mart Dundee Stars fought through another tough battle with Belfast Giants on Sunday night, as they closed out their Challenge Cup Group Stage but it ended in defeat as the Northern Irish club scored three times in the final nine minutes.

The Stars were down four players coming into tonight’s match as injured trio, Ben Sokay, Kris Inglis and Craig Garrigan remained side-lined and forward, Jonathan McBean was fulfilling his two-way contract with Solway Sharks, but they soon lost another player as winger, Romans Semjonovs had to leave the ice following a hit behind the Giants goal, after only five minutes of play.

Despite their shortening bench, Dundee put up a good fight through the first period and had the more dangerous chances of the two sides, whilst being outshot 11-4.

The first key scoring chance for the Stars saw Dundonian, Ben Brown play Philippe Sanche through on goal, but Jackson Whistle stood firm to deny the Canadian and did so again later in the period, as Sanche found his way through again, only for his shot to be stopped by the facemask of the Giants keeper.

The other dangerous opportunity that Dundee created was when defenseman, Devon Daniels jumped up to join the attack and took possession as he crossed the Belfast blueline, but the big Canadian’s wrist shot struck the far side post and the game remained scoreless.

Although, Adam Keefe’s men had still been causing the Stars some problems and whilst on the powerplay, Mark Cooper brought out a spectacular glove save from Stars keeper, Anton Svensson, as the Swede snatched up Cooper’s effort from point blank range.

The first period ended with both teams in a fighting mood, as a late offside call resulted in Dundee defender, Drydn Dow finishing his shot past Whistle and the Giants took exception to that with Tyler Soy and a few of his teammates going after Dow, and starting a scrum.

In the second, both teams were back to full strength but the penalty box doors were constantly swinging as the Giants were first to be punished for holding minor.

Jeff Mason’s men failed to make their man advantage count, as did the Giants when they had a five-on-three powerplay, but just after it expired, Belfast broke the deadlock.

With the Stars fifth skater just re-joining the play, Ben Lake played the puck out from behind the goal and found David Gilbert in front, who slotted the puck under the glove Svensson, to open the scoring on the half-hour mark.

However, the Stars were not behind for long and with Belfast’s Scott Conway in the box for holding, Dundee created a goalmouth scramble for the puck and it sprung out to the left for Sanche to knock home, inside 32 minutes.

From that moment on, the physicality levels ramped up and five minor roughing penalties were called between the final four minutes of the middle session, which all resulted from more net-front rammies as the Stars tried to poke home a second.

Like it had been all weekend, the two teams were still even heading into the final period of regulation but more penalties proved costly for one side.

Whilst some early fouls went unpunished, the Stars were eventually broken down while on the penalty kill and on 51 minutes, David Goodwin had most of the net to shoot into, as a quick pass from Cooper opened up the angle for the American to beat Svensson.

Dundee were soon under pressure and looked to be up against the wall, as the Giants started coming closer and closer to adding a third goal, which eventually they did.

Another powerplay goal came in the 57th minute, as Conway waited before taking the puck round Svensson and that doubled the Giants lead, but just 35 seconds later he added a second, with a quick release from point blank range and that ended the night’s scoring at 4-1.

One point from four was not what Dundee deserved from the weekend, but they have likely done enough to secure their place in the Challenge Cup Quarter-Finals.

Next weekend they return to Elite League action with a trip to Nottingham Panthers on Friday night, before facing Manchester Storm on home ice, on Saturday.