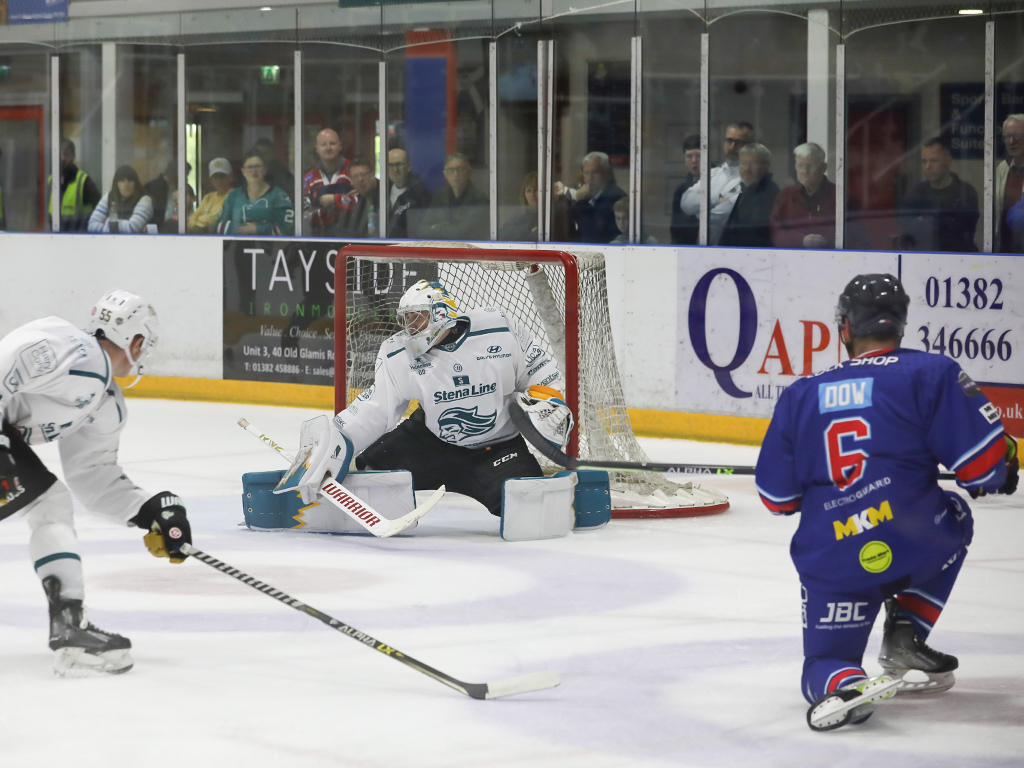 The Trade-Mart Dundee Stars made their 2022-2023 home debut against Belfast Giants on Sunday night and after last night’s 13-goal game, this evening’s match had a much more defensive approach.

Dundee also had the first powerplay of the night as Mark Cooper was punished for cross-checking Kris Inglis and that allowed the Stars to keep the visitors under pressure but they could not break the deadlock.

Once the Giants returned to full strength they began to turn the tables and were hounding the Dundee net and even had their own chance on the powerplay to get ahead.

However, Belfast also failed to make the man advantage count, but soon opened the scoring with Gabe Bast poking home a loose puck during a goal-mouth scramble.

In the 18th minute, the inital shot was denied by Brython Preece but Bast was lurking around the Stars goal and was quickest to react, putting the Giants 1-0 in front.

A holding call against the Stars’ Fabrizio Ricci then put the home team back down to four skaters for the rest of the first period, but the opening session ended with only one goal on the scoreboard.

The second period saw a more physical game being displayed by both teams and the first real scoring opportunity came in the form of a penalty shot for Belfast.

Inglis had used his stick to hook back Sean Norris as he bore down on the Stars net and that earned the Brit a one-on-one chance with Preece, but the Dundee goalie prevailed after making a glove save to deny Norris low effort, in the 30th minute.

Although, any momentum gained by Dundee soon vanished as Darik Angeli finished his chance off with a low driven shot past Preece, just two minutes later to make it 2-0.

However, Dundee were quick to respond as a swift counter-attack ended with Carter Folk picking out the on-rushing Drydn Dow at the back post and the Stars defender fired acorss goal and into the bottom left corner, on 36 minutes.

With the home team back to within one, once again their momentum was short-lived as Belfast utilisied a powerplay to build pressure on the Stars net, before a deflected shot found its way past Preece.

With only 24 seconds left in the middle period, Belfast’s Matt Foley released a rising wrist shot that bounced off the stick of Norris and that sent the puck flying into the far left side of the Stars net.

The third period saw the Stars start brightly and Carter Folk made it a one-goal game as he controlled a lofted pass at the Belfast blueline and drove towards goal, before shooting underneath Whistle, on 45 minutes.

Dundee continued to press for the equalsier and were looking close to scoring, although moments later, Mark Cooper did well to redirect the shot of David Gilbert between the legs of Preece to put the away side 4-2 up.

However, Jeff Mason’s men replied swiftly as Philippe Sanche sent his wrist shot off the underside of the crossbar and into the back of the net, making it 4-3 with six minutes to play.

The Stars were edging closer and closer to an equaliser and even pulled goaltender, Preece off for an extra attacker but Belfast continued to deny Dundee and eventually Colby McAuley shot into an empty Stars goal from the halfway line, with only 32 seconds left on the clock.

The buzzer sounded to confirm a second win in two night’s for Belfast but there were plenty of positives for Mason to take out of his side’s first two performances.