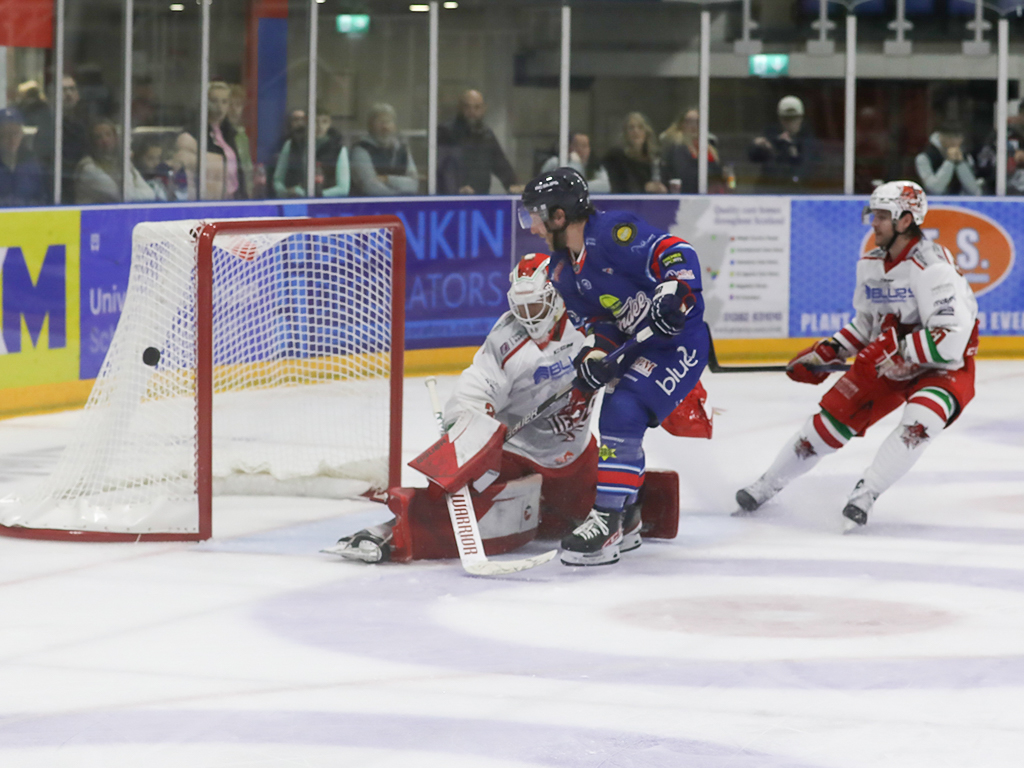 The Trade-Mart Dundee Stars produced a clinical and dominant home ice performance against Cardiff Devils on Saturday night as they won their only game of the weekend, thanks to some timely scoring and solid defence.

The Stars were only one player short of a full line-up as new signing, Chris Lijdsman had to sit out as he awaits his international clearance and two-way players, Jonathan McBean and Ben Brown were both called up into the Dundee squad as well.

The visiting Devils had made the better start to the match as they were first to generate some offensive pressure but the Stars stayed strong and soon made their way down the ice, where an interference penalty against Cardiff’s Marcus Crawford gave the home side the first powerplay of the night.

Jeff Mason’s powerplay unit took just 50 seconds to convert on the man advantage as Romans Semjonovs waited behind the Devils net before passing the puck out to the left side for Ben Sokay to try a narrow-angle shot and his quick finish beat Ben Bowns at his near post, after 10 minutes.

The intensity soon rose and both teams were battling hard for the next goal, with the physicality levels also increasing on both sides, but a late goal from the Welsh club in the first period would send the teams into the first intermission even. 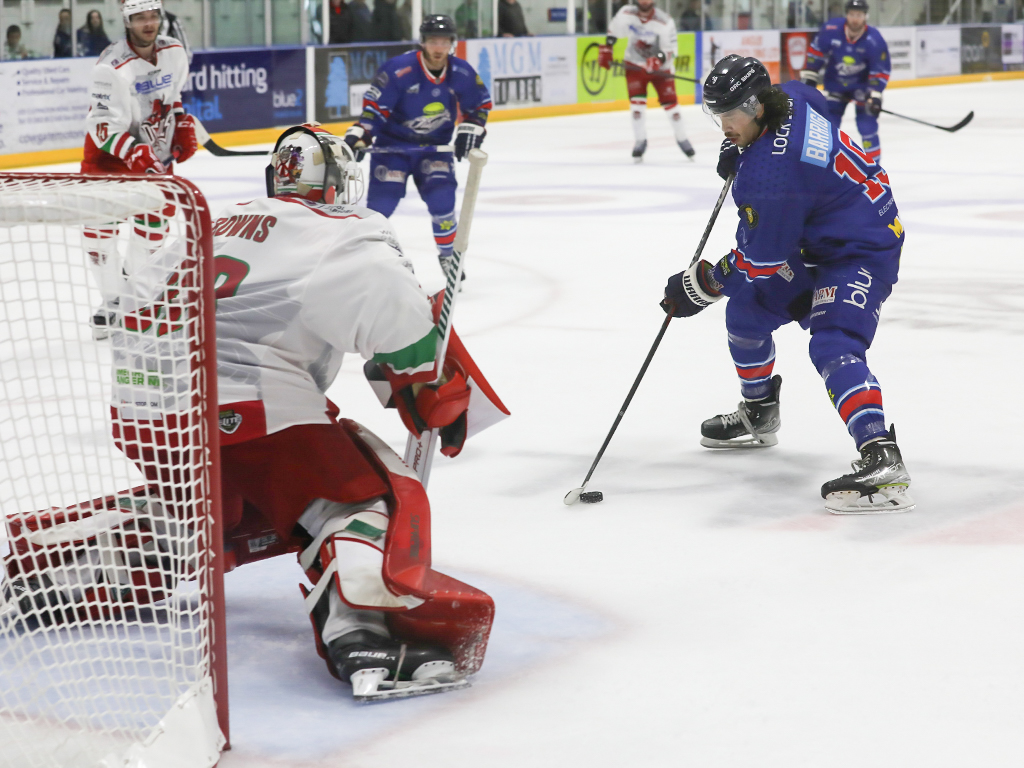 Cardiff had been given a five-on-three powerplay as Dundee’s Colin Joe was called for a tripping foul and teammate, Craig Garrigan was also sinbinned for two minutes for his vocal disagreement with the referees call.

However, the Stars would survive the full two minutes with only three skaters but just as Joe and Garrigan returned to their positions, Ryan Penny’s strike found its way through a number of Dundee defenders and past goalie, Anton Svensson in the 17th minute.

The second period saw the Stars have to defend an early powerplay for the Devils as they were punished for having too-many men on the ice but just moments after the penalty expired, Dundee defenseman, Drydn Dow picked put Carter Folk with a long-range pass and that put the Canadian through on goal.

Folk then calmly picked his spot and fired a clean wrist shot straight over the blocker of Bowns and into the top corner, on 23 minutes.

The rest of the period then saw both side’s powerplay units cash in as the Devils once again tied the game, this time through Joshua Waller inside 28 minutes, when he smacked home the puck from point blank range after it escaped off the stick of his teammate, Justin Crandall.

Dundee would regain the lead before the end of the middle session as a result of the Devils taking two roughing penalties nearly a minute apart and that gave the Stars their own five-on-three powerplay, where Elijiah Barriga would restore their one-goal advantage in the 37th minute.

The American controlled Philippe Sanche’s lofted pass before swiftly turning and dragging the puck wide then shooting past Bowns from right on the doorstep, but their lead would not be safe as a last-minute penalty against Mac Howlett put them under the cosh. 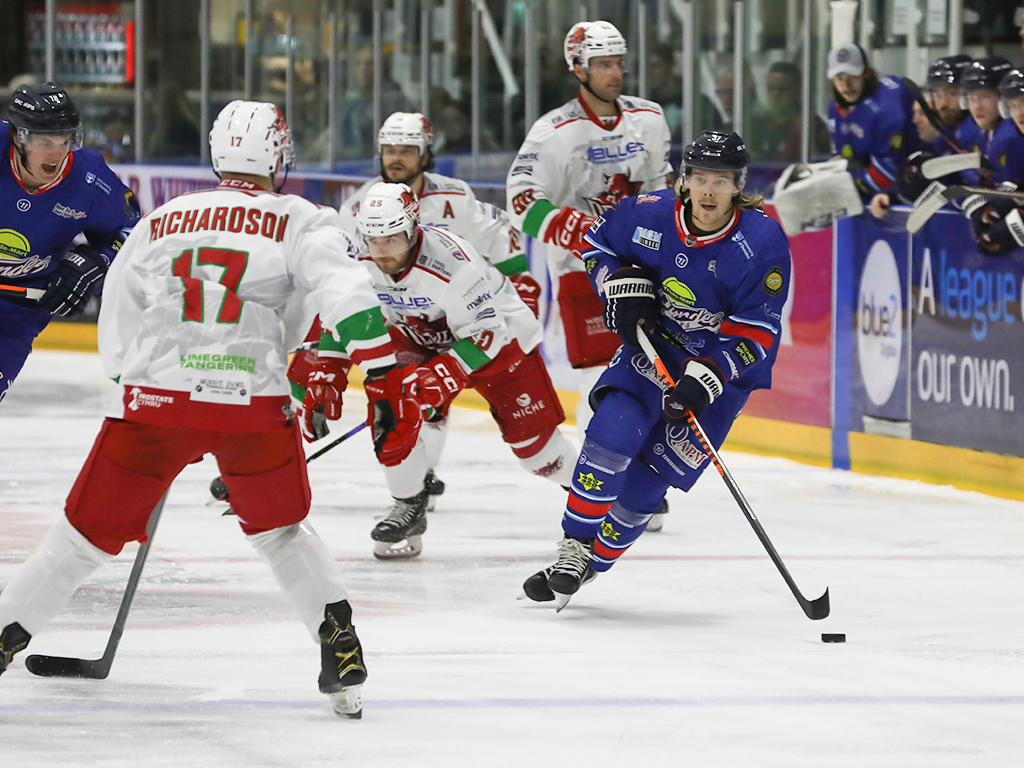 The Stars managed to protect their slender lead until the final break but Brodie Dupont’s side made an organised start to the third period and tied the game up with their remaining powerplay time.

After only 41 seconds of play, Joey Martin turned home their third equaliser of the night, as he deflected Jake Coughler’s pass, up and over the shoulder of Svensson, but that would not be the turning point the Devils would have hoped it could have been as two minutes later, they were back shorthanded.

With Crawford in the penalty box again, Barriga netted his second of the night in 45 minutes and it came from the hard work of Sokay, who after seeing his initial shot saved, he intelligently played the puck straight back out in front of goal, where the on-rushing Barriga was able to tap home.

The Tayside team then finally got the goal they needed to get some breathing room and with just five minutes left to play, Barriga completed his hat-trick with a candidate for goal of the season.

The Californian got himself one-on-one with Bowns before putting his stick and the puck between his legs and shooting straight into the roof of the net, which sent the Dundee Ice Arena into eruption.

Dundee almost made it 6-3 in the dying minutes after Cardiff gambled and swapped Bowns for an extra attacker, which allowed Sanche to have a go from distance but his shot struck both posts before falling onto the goal line and being cleared, with a video review confirming the puck did not cross the line.

The final buzzer brought an end to a great display from the Stars and halted their seven-game losing streak, but the tough trip to Coventry Blaze awaits them on Thursday night. 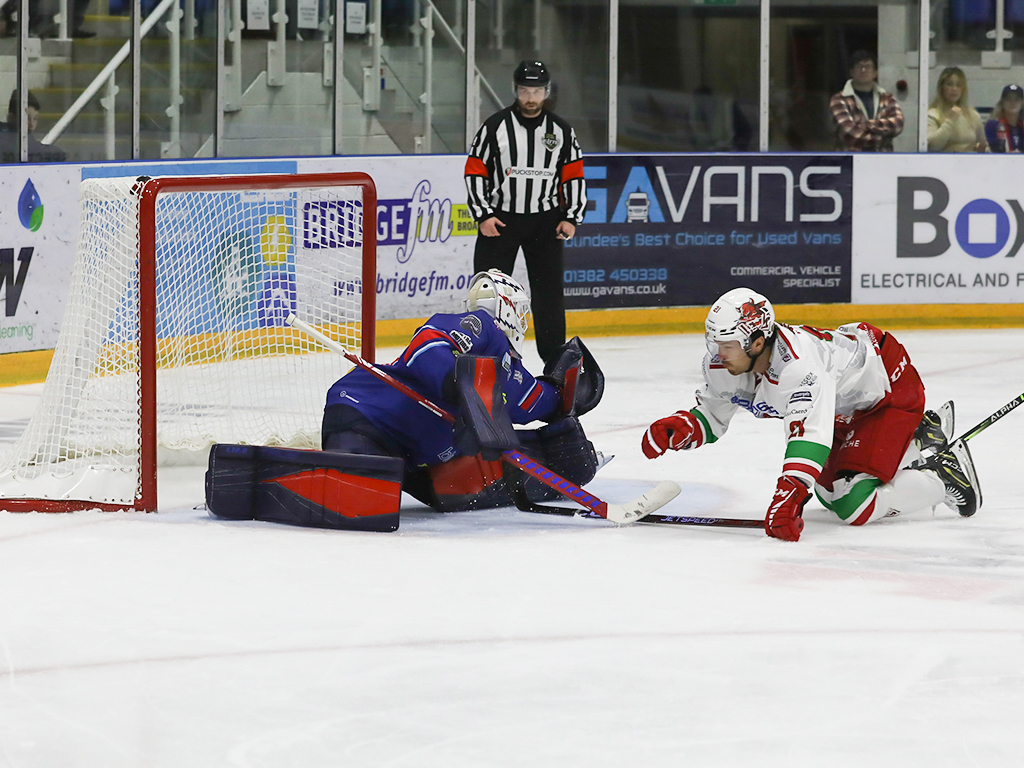